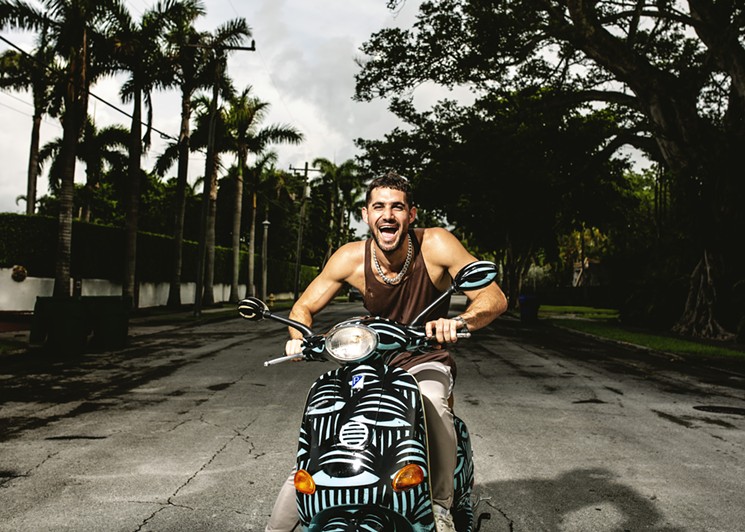 Miami-based art curator (and character) Marcel Katz believes the conventional setting for fine art — the gallery — is going the way of white pages and walkie-talkies. Given the way social media has shifted the paradigm of presenting and sharing, well, everything, he says the traditional practice of hanging works on white walls just doesn’t cut it anymore.

“Artists are putting their works in an environment that isn’t interactive at all,” Katz says. “What do they need the gallery for if the gallery isn’t doing anything unique? More and more artists are getting away from the gallery system and trying to become more independent.

He wants people to engage with art in a manner befitting the 21st Century, to have a sensory experience worth sharing on Instagram. That’s the motivation behind Katz’s experimental platform, the Art Plug Power House, which will debut during Art Basel and Miami Art Week at a converted police impound in Allapattah. The festivities will kick off with a vernissage Wednesday, December 5, followed by an appointment-only viewing Thursday. The two-day public exhibition, set to begin Friday, will offer installations by 32 contemporary artists and a full lineup of DJs.

Katz has been throwing events since his days as a student at Florida State University, when he brought big-name EDM artists such as Skrillex and Steve Aoki to Tallahassee. He entered the art world via Miami’s nightlife, where he cultivated relationships with many of the artists he would eventually work with as a curator. Now his bread and butter is selling blue-chip artwork; most notable, the 31-year-old is the world’s youngest Salvador Dalí dealer.

Try to resist taking a picture when local street artist AholSniffsGlue paints junk cars — and then crushes them using a monster truck.

He has a track record of curating large exhibitions during Art Basel, including a 20,000-square-foot show three years ago. Last year, he participated in the fine-art exhibition Scope Miami Beach, which motivated him to break new ground.

“It was like, Why am I executing someone else’s vision when I can do my own? I have the resources. Why not? It was a no-brainer to me,” he says. “Especially being a part of this generation; we’re the future of the art world, you know? We have the means, the social means, and advantages that a lot of people in the art world don’t really have. We have the ability to make something really unique happen.”

Katz believes social media will be “extremely impactful” in shaping the future of fine art. In fact, Instagram is one of the primary tools he uses for discovering and collaborating with artists of all stripes. So the Art Plug Power House is entirely geared toward social media, with interactive installations and performance art meant to encourage attendees to whip out their smartphones and share the experience.

Try, for example, to resist taking a picture when local street artist AholSniffsGlue paints junk cars — and then crushes them using a monster truck. (This will happen three times a night.) In the same area, motorcyclists will pop wheelies and burn out just because. Elsewhere, there will be a “scent bubble” that smells curiously similar to the air freshener in the Lyft vehicle you took to the show. Instagram-famous cartoonist Ketnipz will host a pizza/slumber party with a 14-foot rainbow and a mechanical unicorn, and Havana-born painter CB Hoyo will oversee a five-room gallery designed to look like a trafficking house, complete with actors playing drug lords.

If it all sounds extravagant, that’s the point. Everything at the Art Plug Power House is designed to ignite the senses. “You will smell certain scents, touch certain things, and hear certain sounds,” Katz says. “It’s a sensory overload at the show. There will be so much going on, it will be almost impossible, I think, not to take a picture.”

Together, we can nurture the talent of the future and bring the empowering force of music and the arts to a new generation.