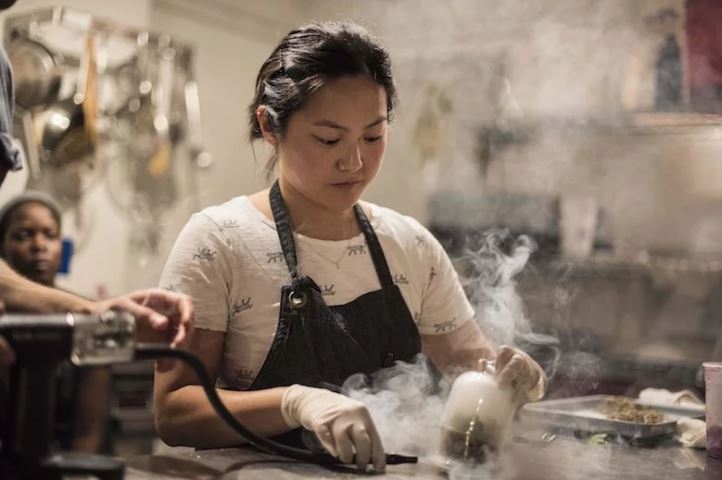 Returning to New York City this December, Jenny Dorsey’s “Asian in America” is a multi-sensory, six-course journey taking diners through the trials and triumphs of Asian-American identity.

“Just because they like your food doesn’t mean they accept your culture and who you are,” chef Jenny Dorsey tells me with an air of defiance. “People pick and choose what they like and take what they want.”

It’s a sentiment that rings true for many of us in the Asian-American community. The trope of the “smelly lunch” has been explored ad nauseum in Asian-American journalism because it’s the most instantly recognizable experience shared by those who grew up in immigrant households. Nowadays, many of those dishes our classmates turned their noses at have become some of the most popular foods in America. Outside the cafeteria, discrimination against Asian-Americans is still rampant.

Launched in August at New York City’s Museum of Food & Drink and returning December 7 at the Museum of Chinese in America, Dorsey’s Asian in Americafuses virtual reality technology with spoken word performance, poetry, and a six-course dinner. As dishes are served, VR goggles allow guests to witness ingredients, cooking techniques, and imaginative graphic visualizations—created in a VR drawing platform called Tilt Brush—coming together on top of the plate.

In conceptualizing the exhibit, the Shanghai-born, Bronx-raised chef sought to take diners through her journey navigating Asian-American identity.

“Asian in America grew out of my desire to become a better person and a better chef by sharing what I’m feeling, what I’m going through, and why I was doing the things I was doing,” Dorsey explains. “Instead of going on autopilot and just making Asian food, I tried to organize my thoughts food-wise, which helped uncover a lot about myself. You see a lot of chefs make menus around their identity, but a lot of the nitty gritty stuff doesn’t get surfaced.”

Dorsey is emotional when she speaks about the personal moments that inspired the exhibit, from the challenges she faced in the culinary field to a lack of belonging to either America or her native China, and ultimately her estrangement from her parents, who did not approve of her decision to become a chef.

“My parents really didn’t like it or accept it,” Dorsey recalls. “At first, I tried to shun the whole thing and forget where I came from. I’d think to myself, ‘If I can make this perfect meal or perfect plate or perfect photo, I can wash away all of those things I don’t want to deal with.’ I tried to make myself happy tweezering herbs and arranging little flower petals in a certain way. If other people were impressed with my food, it made me feel worthwhile.” She adds, “Not only was I not happy, I didn’t have any inspiration because everything I made was based on what I thought other people expected from me.”

Without her family’s support, Dorsey went from a management consultant gig in fashion to become the youngest MBA candidate at Columbia Business School. A find-yourself sabbatical landed her in culinary school and ultimately in the kitchens at the likes of New York’s Atera and San Francisco’s Atelier Crenn.

The Asian in America dinner draws on that fine dining background, starting with the introductory “Substitutions,” pairing a jackfruit-based riff on pork barbecue with a Japanese chawanmushi-inspired aerated egg to expose the lack of individualism granted to people of color by the majority. Meanwhile, another course, entitled “Stereotypes,” rebuffs generalizations of various Asian cuisines, serving “not so spicy” Thai shortribs, “not so greasy” Chinese pea vines, and “not pho” Vietnamese bun mam.

But it’s perhaps the maze-inspired “Model Minority” course that most directly encapsulates the universal struggle of Asians in America today. “This one is about navigating the world as an Asian-American,” Dorsey says. “You’re a character placed in a trap, and you’re trying to find your way out.”

Dorsey says she’s been surprised and delighted by the reception to the exhibit, which kicked off its North America tour as one of the featured presentations during the ReThink Conference in Napa Valley. Beyond various accolades—it’s been nominated for the Future of Storytelling’s Bridging the Divide Award and selected as a featured piece on the Tribeca Film Festival’s VR channel—she says the show has challenged diners to either reflect on their own experiences or empathize with others’.

“The nice thing about VR is that it’s not something you often see at a restaurant, so it looks like people are just lost in thought for a couple minutes as they get to think about the food and see it in a different way,” Dorsey says. “After the dinners, people have really opened their hearts, shared their pasts and their history—even things that they might not wanted to share with other people.”

Asians in America will take place at the Museum of Chinese Americans in New York on December 7th from 6:30 to 9:30 pm. Tickets can be purchased here.

Source: How This Asian-American Chef Uses Food and VR to Tell Her Immigrant Story