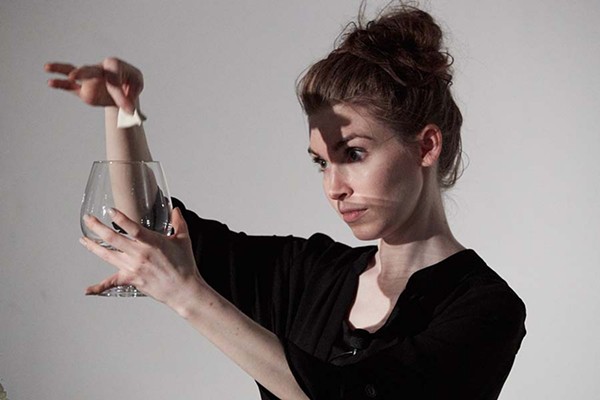 The envelope arrived about a week after the online request was made. It contained a smaller envelope sealed with black wax stamped “J.” Inside were a mirrored coin and a card which, when scratched, gave off a faint whiff of password.

And that’s just how you register for tickets for “Bottling the Impossible,” the latest show from Chicago magician Jeanette Andrews. Small groups will watch Andrews’s performance in an undisclosed location in an intimate, conversational space that the magician designed based on influences ranging from cognition theory to the Rothko Chapel in Houston.

Sending the Eventbrite registration password via scratch-and-sniff (the name of the smell was also printed under a scratch-off section of the card for the olfactorily challenged) was a strategy to create a sense of “mystery, wonder, and anticipation” weeks before the show, Andrews explains, but it was also a wax-sealed pushback against impersonal mailers and evites. You’re Andrews’s guest, and she wants you there.

“Personally, something very important to me in the work that I do is that every single person feels important and their physically being there really matters,” the 29-year-old magician says.

At the center of the performance are four impossible bottles modeled after the works of magician and teacher Harry Eng. But where Eng would somehow fit blocks of wood, packs of cards, locks, and scissors inside small-necked bottles, Andrews, whose work often explores the magical possibilities of smell, fit perfume bottles inside instead.

It took Andrews a year to build them, as Eng’s methods died with him in 1996. A research librarian at the Conjuring Arts Research Center, an appointment-only magic archive in New York, found Andrews a line in an old article that gave a clue—just one clue—to Eng’s technique. From there it took nine months to puzzle out the rest of how to hand-build four impossible bottles of her own.

“There were times where I was not leaving my house for days,” she says. “It was hundreds of hours.”

She cracked the case without cracking the glass. Her four impossible bottles—”magic wands for the scientifically minded,” to paraphrase one of her magical mentors, Simon Aronson—serve as centerpiece, sculpture, transition between acts, and glass-in-glass symbolism.

It’s the same reason Andrews works with her sleeves rolled up, and why she uses clear plastic tables, chairs, and music stands. It’s about transparency in magic—not in terms of revealing tricks of the trade, but in terms of the collaboration between amazed and amazer: “It’s trying to be a little bit more open about the process in terms of ‘You do this and you do this and I’ll do this and then something incredible happens at the end.'”