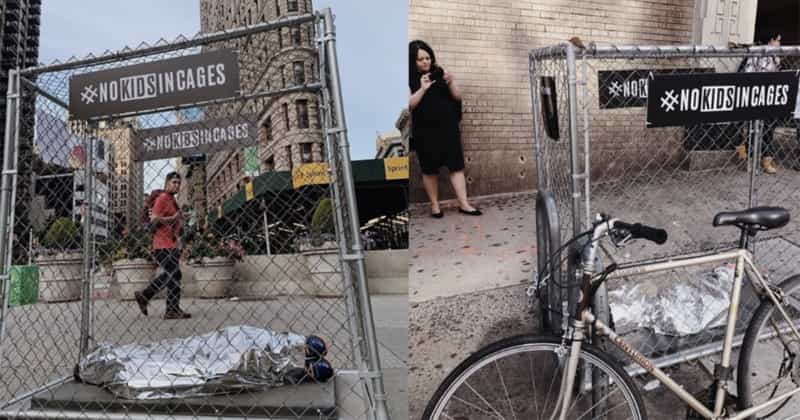 New Yorkers woke up this morning to dozens of art installations of chain-link cages, with audio of crying detained children through speakers, on city sidewalks. Ad agency Badger & Winters is behind the art in support of RAICES, an immigration and legal assistance nonprofit in Texas. Organizers hoped the installations would bring more attention to the growing immigration crisis at the border. Twenty-four installations in total were placed on New York City streets before city police removed several installations throughout Manhattan and Brooklyn.

The art installations were left outside of Google’s headquarter, news organizations including CNN, Fox News and Newsweek, the Barclays Center and various highly trafficked parts of the city.

“We have to rise up against innocent children being ripped from their parents’ arms,” Badger & Winters Founder Madonna Badger said in a statement to AdAge. “What has been happening at our borders is inhumane and against domestic and international law. There is no justification for harming the ones among us who are most in need of love and protection.”

The detention replicas looked to be constructed of paper and played audio from clips recorded inside a migrant holding facility and published by ProPublica last year. The audio, which had Border Patrol agents joking with each other as children cried for their parents, brought public outrage to the detention of migrant children.

Police reportedly had to use chainsaws to bring down the art installations.

Videos and pictures on Twitter show police taking down the art installations within hours that they were put up. Countless pedestrians looked in shock and awe as they heard the chilling audio play on city streets.

One video shows a police officer using an electric saw to cut open the chain-link art next to a parking payment stand. According to the NY Daily News, alarmed pedestrians notified police about the street art and promptly began taking the installations down.

The Department of Health and Human Services plans to place approximately 3,000-4,000 migrant children at these temporary emergency shelters amid overcrowding at other centers near the U.S-Mexico border. According to the Washington Post, the number of unaccompanied children apprehended this fiscal year has increased 74 percent to more than 56,000.

“The litmus test of any society is how it treats children,” Jonathan Ryan, executive director of Raices, said in a statement. “By normalizing the detention of children in cages, we’re only going further down the path of forsaking the rights of all children.”

Source: Art Installations Popped Up All Over New York City To Remind People That Children Are In Cages In The US And It’s Not Normal