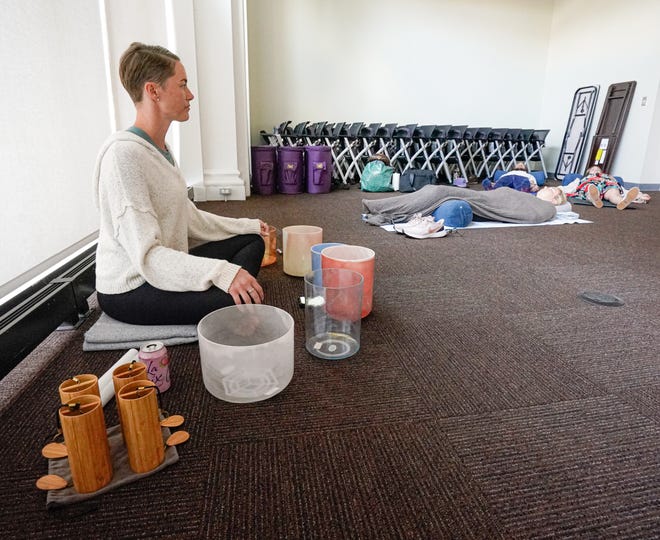 Imagine getting a massage but for your brain and nervous system. That’s kind of what a sound bath is — loosely akin to yoga and a stepping stone to meditation. The ultimate goal is to help the body and mind relax using sound waves from singing bowls.

I’ve done yoga before and attempted to meditate, but I’d never heard of a sound bath until moving to Indy. Having my curiosity piqued, I decided to speak with some Indianapolis-based sound bath facilitators such as Devon Ginn, Preciss Stone and Sarah Gardner to see if they could offer me some insight.

After conversations with each of them, I felt confident about trying a sound bath for myself. I booked one of Gardner’s sessions at Maven Space, a women-centered shared workspace and social club, for July 13 (a full moon!). I showed up ready for whatever was to come, and my colleague, photojournalist Michelle Pemberton, came ready to document the experience from behind the lens.

Walking in, I immediately felt like I was in a relaxed and comforting environment. Maven Space is aesthetically pleasing to the eye. The mostly pink and peachy, orange and white-gold color scheme gives the place a warmer, pleasant vibe.

The lights were off and the room where the sound bath was being held smelled of incense — sandalwood, I think. Floor-to-ceiling windows faced a busy street but the blinds were drawn, blocking out some of the light.

As participants entered, Gardner, a 35-year-old mindfulness consultant from Indianapolis and the facilitator of this sound bath, welcomed us in, encouraging us to make ourselves as comfortable as possible. Yoga mats, blankets, bolsters and pillows were suggested.

So what exactly is a sound bath?

Gardner told me a sound bath is best described as a “deeply profound, multi-sensory experience” and promotes a wide range of physiological responses.

Others agreed. “I can say all the words and try to describe it to you,” Stone, 44, told me over the phone. “But until you experience it for yourself you will never ever understand.”

In other words, a sound bath is a meditative experience. You lie down and allow yourself to be immersed in the sound waves and vibrations from the singing bowls played by a facilitator.

“I feel like it’s one of those experiences that you have to dive into, kind of with no knowledge and just feel it,” Ginn, 32, said during our conversation a few days before.

“The resonance from the bowls — when they’re played properly — allows you to focus,” Ginn added, “and it finds that nice state between the task mode network and the default mode network, where you’re not quite asleep, but you’re restfully awake.”

As soon as Gardner struck her first bowl I felt like my body lit up like a live wire. It took a minute for me to calm down and lean into the feeling. I know what singing bowls sound like, I’ve seen and heard them before, but never in person and not like this.

Each of Gardner’s bowls vibrates at a frequency of 432 hertz, sounding like an ethereal hum as the mallet is rubbed along the outside rim of the bowl. Each bowl is a different size and volume, meaning each bowl resonates on a different note on the musical scale associated with one of the chakras, or major energy points in the body, Gardner said.

Different notes evoke different physiological responses, such as aiding in stress relief, fatigue and depression symptoms according to a study published in the Journal of Evidence-Based Complementary and Alternative Medicine.

“Not to oversell it,” Gardner said. “But it changed my life.”

I won’t lie, it was strange at first, even for me. It felt like my body was trying to decide if it wanted to relax or not. But I was here to maybe meditate, so I went along with it and watched the pretty colors dance across the insides of my eyelids as I listened to Michelle tiptoe around the room to get photos as quietly as possible.

Before the pandemic, I might not have tried this, but both Ginn and Gardner told me chaotic times seem to bring out people’s desire to seek out alternative methods of comfort and heal themselves.

Gardner said she attended her first sound bath in 2017, after spending 10 years working as a tech sales representative in Nashville, Tennessee. However, she didn’t buy her own set of singing bowls until the pandemic.

“I was just like, ‘I think people need this,’” she said. “I was just kind of looking for a way for me to feel better, and I couldn’t find any practitioners in Indy, so I started offering classes.”

Ginn, who offers public sound bath sessions every Monday from 7:30-8:30 p.m. along the Canal, is also the manager of programs at the Madam Walker Legacy Center. He said he’s always had a mindfulness practice, but started diving into Daoism and Buddism before taking his first sound bath in 2019. Ginn began facilitating his own sessions virtually alongside Haven Yoga Studio during the pandemic.

Stone, who also teaches yoga at The Hot Room, told me she discovered and begin facilitating sound baths during the pandemic as well. With yoga studios closed, Stone said she began offering classes for both yoga and sound baths online.

What’s actually happening to your body during a sound bath?

“When you focus on your breathing, specifically pranayama exercises,” Ginn said, “hearing the bowls in conjunction with the breath, it really gives you the opportunity to truly just find peace.”

There were definitely moments when I couldn’t remember if I wasn’t breathing because I wasn’t consciously paying attention to my breath. It almost felt as if my body decided to go to sleep but forgot to tell my brain. For a minute it was just me and my thoughts, and then it was me and my breath.

Gardner said sound waves emitted from the singing bowl “hijack your brain waves” and slow them down. These sound waves essentially “train” your brainwaves to mimic them and puts you in a meditative state.

Am I meditating? I asked myself at least three times during the session.

Even if I wasn’t meditating, I was definitely relaxed.

When this ends, it’ll be too soon, I thought.

Eventually, I started to get cold. Gardner explained that might happen both in our interview and before the session.

Considering the effects vibrations have on water and the fact that the human body is about 55-60% water, Ginn said there’s something to be said about the physical effect a sound bath can have on our bodies.

“There’s a science behind it that really allows you to understand — at least visually — what happens to water when it’s immersed in vibrations,” he said. “And while I think that’s beautiful and aesthetic, really it’s just focusing on rest.”

Who should get a sound bath?

The real answer, Gardner said, is everyone. Where other wellness activities, such as yoga, require physical activity, a sound bath doesn’t require anything of participants but their time. Ginn said sound baths are especially beneficial for those who work high-stress jobs every day and just need a moment of rest.

“This practice is accessible to everyone,” Stone said. “and everyone should experience a sound bowl at least once in their life.”

As someone with ADHD, I wasn’t sure how well this would work, but the deeper I got into the session, the more the world seemed to fall away. Time blurred together and one hour felt like four hazily blending together. It’s hard to drown out the sounds of the city, especially in the heart of downtown Indianapolis, but for 60 minutes, the outside world ceased to a whisper.

Every so often the smell of the burning incense and the chimes would cut through the sound of the bowls resonating in the room, and I would remember where I was and what I was doing. Almost like I was coming up for air after being blissfully submerged in an almost-nap.

What should I bring to a sound bath if I go?

Gardner, Ginn and Stone all suggest people come dressed comfortably, with a blanket or pillow. Gardner said some people even bring crystals or a journal, it’s really fair game.

“I always tell people, if you feel like you’re going to like an old-school sleepover, you are doing it right,” she said. “So the more comfortable you can be, the better your experience is going to be.”

Stone suggests bringing a bolster and something to cover your eyes such as an eye mask or handkerchief as it can help you focus and turn inward during a session.

I took their advice and wore a pair of comfy leggings and an athletic top. I brought my yoga mat and a fleece blanket. I didn’t bring a bolster, but thankfully Maven Space had some there for us to use if needed. I ended up placing one under the backs of my knees to relieve pressure on my lower back.

What should I expect if I go to a sound bath session?

You could feel like you’re floating or like you’ve left your body, Stone said. You might cry, fall asleep and snore or hear your stomach make some funny noises, Gardner said. Ginn said you might even giggle while listening to the sound of the bowls. All of that is normal, he assured. This is a judgment-free space.

“It can be a very vulnerable experience as well because you can be left very emotional,” Gardner said. “And like a lot of people cry during sound baths because it is an opportunity for an emotional release.”

I didn’t leave my body or feel like I was levitating. I actually felt very grounded. Each strike of one of the higher-pitched sound bowls forced all tension out of my muscles and joints. I was a ragdoll on a yoga mat.

I did hear my stomach start to make some noises though, as I realized how hungry I was by the end of it. I also teared up a little as the session ended and I had the sensation of “waking up” from a deep sleep.

However, as I got up to leave, I realized I felt incredibly refreshed, happy and physically lighter.

Source: Imagine a massage for your nervous system. I tried a sound bath, and here’s how it went. 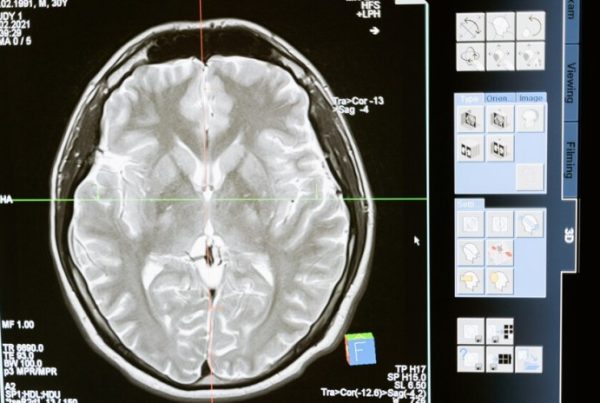 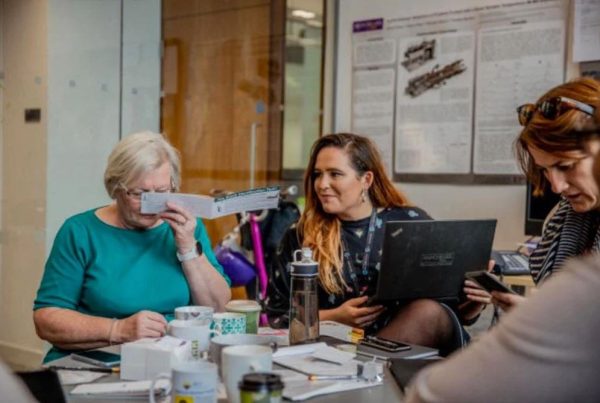 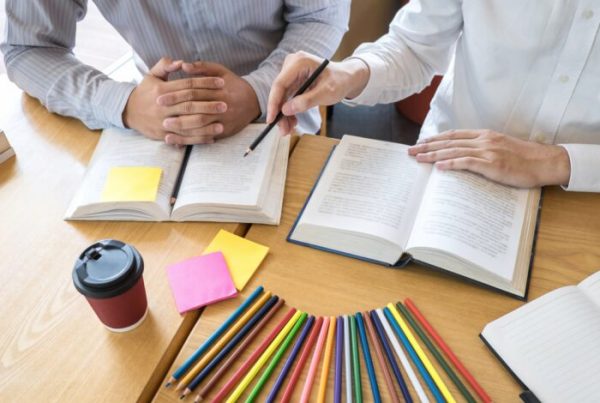