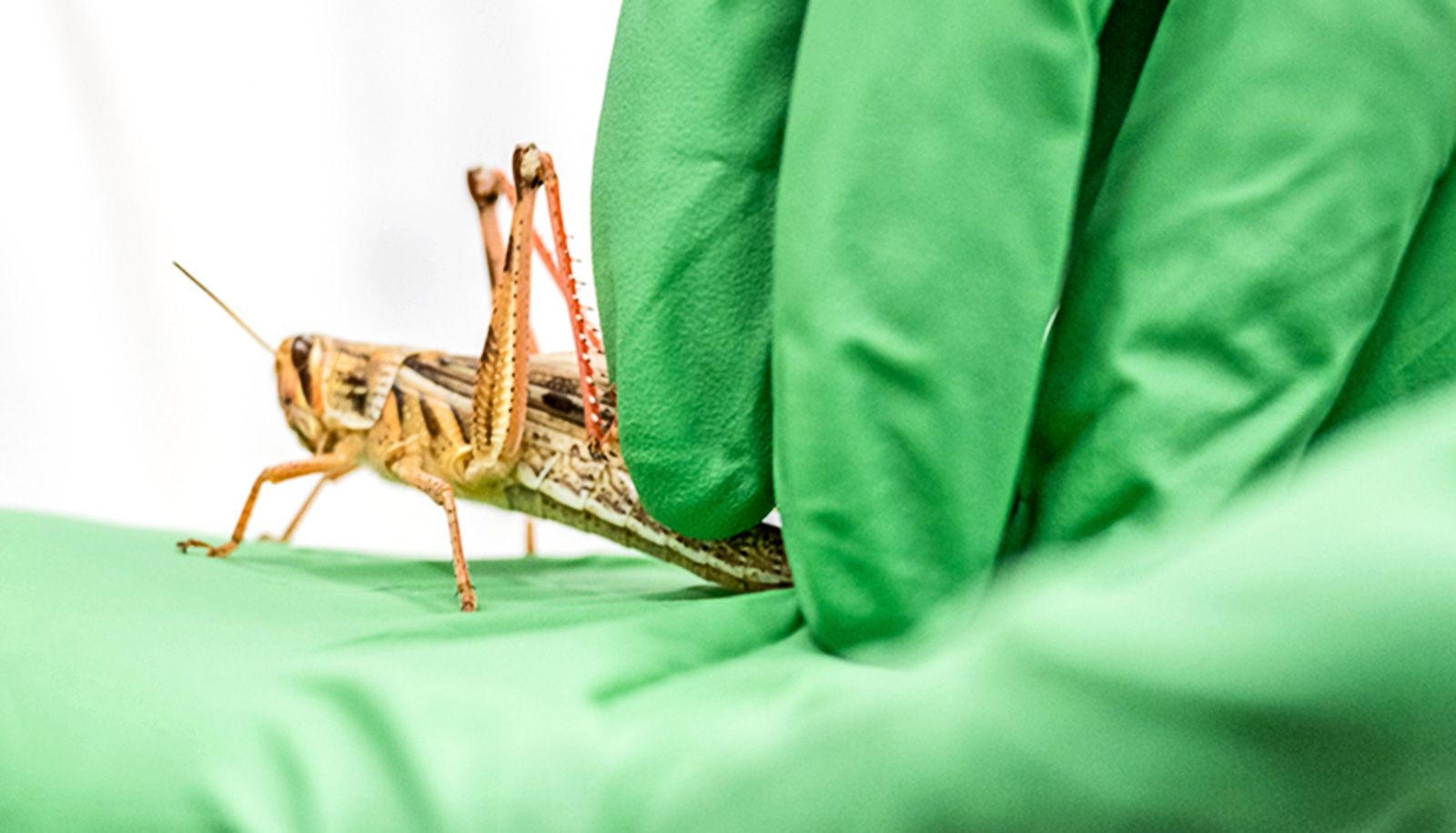 With their antennae and neural circuitry, locusts can differentiate myriad odors, including those released by cancer cells. Researchers are tapping into the insects’ brains to take advantage of that for early detection. (Credit: Derrick L. Turner)

Researchers have shown that locusts can not only “smell” the difference between cancer cells and healthy cells, but they can also distinguish between different cancer cell lines.

However, patients need not worry about locusts swarming their doctors’ offices. Rather, the researchers say this work could provide the basis for devices that use insect sensory neurons to enable the early detection of cancer using only a patient’s breath.

“NOSES ARE STILL STATE OF THE ART. THERE’S REALLY NOTHING LIKE THEM WHEN IT COMES TO GAS SENSING.”

Although such devices aren’t on the immediate horizon, they’re not as far-fetched as they might sound, says the authors of the new research on the website BioRxiv. (BioRxiv, pronounced “bio archive,” is a pre-print server that hosts research articles before they’ve been peer reviewed.)

Part of that is because people have grown accustomed to technology that augments or outperforms our natural senses. For example, telescopes and microscopes reveal otherwise invisible worlds. The success of engineered devices can make it easy to overlook the performance of our natural tools, especially the sense organ right in front of our eyes.

“Noses are still state of the art,” says Debajit Saha, an assistant professor of biomedical engineering at Michigan State University. “There’s really nothing like them when it comes to gas sensing.”

That’s why we trust dogs and their super-sniffers to detect telltale smells of drugs, explosives and, more recently, health conditions including low blood sugar and even COVID-19.

Scientists are working on technology that can mimic the sense of smell, but nothing they’ve engineered can yet compete with the speed, sensitivity and specificity of old-fashioned biological olfaction.

“People have been working on ‘electronic noses’ for more than 15 years, but they’re still not close to achieving what biology can do seamlessly,” says Saha, who also works in the Institute of Quantitative Health Science and Engineering, or IQ.

“THIS IS A NEW FRONTIER THAT’S ALMOST UNEXPLORED.”

This lack of gas-sensing devices creates an opportunity when it comes to early detection of diseases, especially those like cancer, for which early intervention can save lives. When cancer is caught in its first stage, patients have an 80% to 90% chance of survival. But if it’s not caught until stage 4, those numbers plummet to 10% to 20%.

Cancer cells work differently than healthy cells, and they create different chemical compounds as they work and grow. If these chemicals make it to a patient’s lungs or airways, the compounds could be detected in exhaled breath.

“Theoretically, you could breathe through a device, and it would be able to detect and differentiate multiple cancer types and even which stage the disease is in. However, such a device isn’t yet close to being used in a clinical setting,” Saha says.

So Saha and his team are developing a new approach. Instead of trying to engineer something that works like biology, they thought: Why not start with the solutions biology has already built after eons of evolution, and engineer from there? The team is essentially “hacking” the insect brain to use it for disease diagnosis, Saha says.

“This is a new frontier that’s almost unexplored,” he says.

Saha and his team chose to work with locusts as their biological component for a few reasons. Locusts have served the scientific community as model organisms, like fruit flies, for decades. Researchers have built up a meaningful understanding of their olfactory sensors and corresponding neural circuits. And, compared with fruit flies, locusts are larger and more rugged.

“…WHEN THE BUGS COULD DISTINGUISH THREE DIFFERENT CANCERS FROM EACH OTHER, THAT WAS AMAZING.”

This combination of features allows the researchers to relatively easily attach electrodes to locust brains. The scientists then recorded the insects’ responses to gas samples produced by healthy cells and cancer cells, and then used those signals to create chemical profiles of the different cells.

This isn’t the first time Saha’s team has worked on something like this. In 2020, while at Washington University in St. Louis, he led research that detected explosives with locusts, work that factored into recruiting Saha, says Christopher Contag, the director of IQ.

“I told him, ‘When you come here, we’ll detect cancer. I’m sure your locusts can do it,’” says Contag, a professor in the biomedical engineering department and in the microbiology and molecular genetics department at Michigan State.

One of Contag’s research focuses had been understanding why cells from mouth cancers had distinct appearances under his team’s microscopes and optical tools. His lab found different metabolites in different cell lines, helping account for the optical differences. It turned out that some of those metabolites were volatile, meaning they could become airborne and sniffed out.

“The cells looked very different metabolically, and they looked different optically,” Contag says. “We thought it made a lot of sense to look at them from a volatiles perspective.”

“We expected that the cancer cells would appear different than the normal cells,” Contag says. “But when the bugs could distinguish three different cancers from each other, that was amazing.”

Although the team’s results focused on cancers of the mouth, the researchers believe their system would work with any cancer that introduces volatile metabolites into breath, which is likely most cancer types. The team is starting a collaboration with Steven Chang, director of the Henry Ford Head and Neck Cancer program, to test its detection system with human breath.

The researchers are also interested in bringing the chemical sensing power of honeybees into the fold. The research team already has promising results using honeybee brains to detect volatile lung cancer biomarkers.

Again, people need not worry about seeing swarms of insects in their physicians’ offices. The researchers’ goal is to develop a closed and portable sensor without an insect, just the biological components needed to sense and analyze volatile compounds—possibly before other, more invasive techniques can reveal the disease.

“Early detection is so important, and we should use every possible tool to get there, whether it’s engineered or provided to us by millions of years of natural selection,” Contag says. “If we’re successful, cancer will be a treatable disease.”