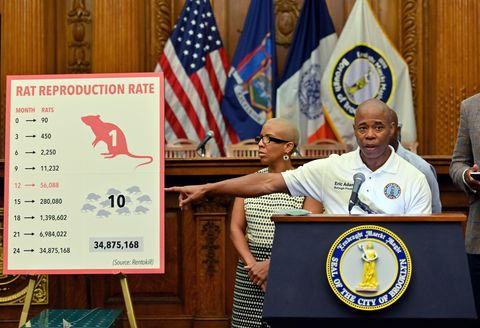 How to Get Rid of Rats | Rats in NYC

Wherever and whenever there has been a city, there have been rats. Lots and lots of rats.

From the rat traps of ancient Egypt to the headaches they give modern New Yorkers, rats have been bothersome rodents from the beginning. But a new study from Fordham University, Columbia University, and Arrow Exterminators Inc. looks at a novel way the rodents could be repelled or baited: with pheromones found in the scents of other rats.

Older estimates suggest that rats cost the world around $300 billion a year, for causes as varied as fines and business closures, disease, fires, and breaking down vehicles. In 2018, per the New York Times, a total of 17,353 rats were reported in New York City. This year, those sightings have skyrocketed 38 percent. The rats are ruthless.

Of course, rats are widely used in scientific labs across the world. But there are key, under-studied differences between lab rats and urban rats (Rattus norvegicus), the new study argues. There are a number of reasons for this discrepancy, including that people don’t want scientists studying the rats on their property while they have to live there. Generally, they just want the rats gone.

So to study urban rats, researchers trapped and implanted microchips in them at a waste recycling center in Brooklyn. They used radio-frequency identification sensors to make sure their rats weren’t lost in the shuffle of the dense urban area.

These sensors became beacons for the rats. Scientists would put them in a variety of locations, taking into account the rat’s perspective. Some sensors were in sheltered, safe areas that rats were familiar with, while other sensors were placed in riskier environments—places where the rats might become prey to one animal or another.

All sensors were sprayed with male and female pheromones, which scientists regularly reapplied. Rats have a far stronger sense of smell than humans. Beyond the normal array of smells available to the human nostril, a rat can detect chemicals indicating a change in atmosphere or emotion.

The rats had different reactions to each set of pheromones. Rats were determined to stake out each male scent at least once, risk be damned. But once was all they needed. Female scents, however, did not make the rats as risk-averse, but they were far more popular. Rats made 5.02 visits a day to the female scents compared to 0.2 visits a day to the male odors.

With that understanding, the authors hope they can develop either deterrents to keep the rats away or incentives, like getting them to eat bait or immuno-contraceptives.

“Context is everything,” the team says in a press statement. “If we can pinpoint the scents and contexts that are most useful, then we increase our chances of creating novel control tools, but further research is needed under a broad range of conditions.”

If it were easy to drive out rats, somebody would have already done so in the thousands of years of civilization. But at this point, anything is worth a try.

Source: How to Get Rid of Rats | Rats in NYC