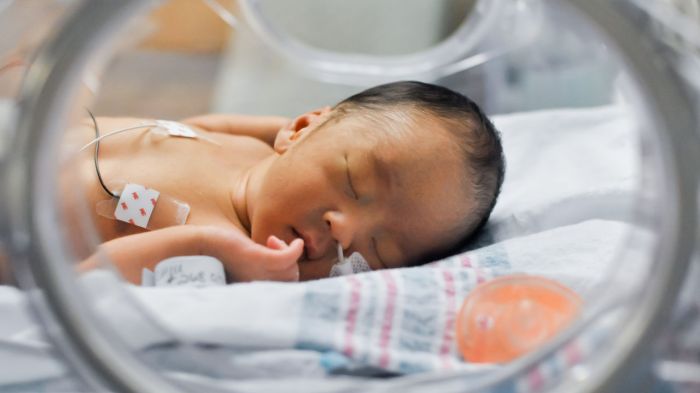 When most of us think of aromatherapy, we tend to imagine MLMs, essential oil fanatics, or Gwyneth Paltrow recommending flavored oxygen. What we don’t think of: newborn babies, (unless it’s possibly using them as perfect, yummy-smelling aromatherapy, because nothing smells better than baby head). But according to the Chicago Tribune, NICU babies at the Rush University Medical Center have been using a form of aromatherapy to bond with their parents. Because science.

Every day, parents with NICU babies are given a six-inch cloth heart to wear against their skin. The handmade heart picks up their scent and is placed by the baby’s head, which soothes and comforts them even when their parents are gone. This is because, according to Rush NICU nurse Amy Levin, scent is one of the first senses newborn babies develop.

In fact, according to Stanford Children’s Hospital, the brain’s olfactory center “forms very early in fetal development” —first trimester early — so even very, very, young preemies come equipped with the ability to benefit from exposure to their parents’ scent.” Studies have shown newborns can recognize their mother’s natural scent from breathing and swallowing her amniotic fluid, which absorbs odorants from the maternal diet, in utero, Levin told the Tribune.

It gets even more better and more science-y too.

Apparently, the sense of smell is also strongly linked to memory. According to Psychology Today, this is because of the way that the brain’s put together. When you smell something, it’s “first processed through the olfactory bulb, which runs along the bottom of the brain.” This organ has direct connections to the amygdala and the hippocampus, two areas that “are strongly implicated in emotion and memory.” That’s why the smell of Grandma’s cookies are more evocative than anything at remembering childhood Christmases, or the scent of gasoline at making you think of Grandad and his garage.

This same science works to comfort newborns separated from their mothers during an often-traumatic hospital stay that can be full of painful medical procedures.

About 90-95% of the 43 babies in Rush’s NICU have these scent cloths, which are eventually put into baby books or even stay in use when parents go back to work. The hearts are made and donated by nursing students, a local quilting group, and the mother of a Rush doctor.

These hearts are especially important to parents that, for reasons of work or distance, can’t visit the NICU as often as they’d like. Brooke and Andy Crutchfield, for example, live 60 miles from the hospital, and can only see their babies four times a week during snatches on weeknights. Brooke tells the Chicago Tribune that, “We leave, but they still have our scent … So it’s like they’re always kind of with us.”

But the cloths are also used in reverse. After some time with the baby, the cloth is sent home with the parents. One study from 2013 confirms that the smell of newborns “on clothing worn by infants” lit up reward centers in the brains of new mothers. In fact, The Cut says, “Brain scans of the participants showed that ‘body odors from 2 day-old newborns elicit activation in reward-related cerebral areas in women,’ the study authors wrote.” Their brains reacted as if the scent were “a delicious treat or even a drug.”
“We interpreted our results as (an) indication that body odors play an important role in the forming of a bond between mothers and newborns,” said study co-author Johannes Frasnelli, a professor in the department of anatomy at the University of Québec in Trois-Rivières, to the Chicago Tribune. “In addition to this, we know that odors … can evoke very vivid and present memories.”

But this sense of smell actually goes both ways. In a study by Trevor Case of Macquarie University in Australia, detailed in LiveScience, moms actually prefer the smell of their own baby’s poop. They consistently ranked it as “less revolting” than other babies’, even when the diapers were purposely mislabeled. Several babycenter threads, including this one from 2009 and this one from 2015 are actually simply titled “I Love the Smell of My Baby’s Poop.”

Gawker concludes, in an article titled, “Does Your Baby’s Poop Smell Better Than Other Baby’s Poop?” that “the most likely causes of the phenomenon would seem to be positive psychological associations with your child and/ or habituation, which cause you to develop more a tolerance for their particular brand of poop. There may also be biological factors, such as similarity of gut flora between you and your child.”

So baby while baby aromatherapy seems to go in both directions and work in different ways, it’s really helped the Crutchfields. They say their babies have seemed less fussy since the scent cloths were introduced, and that they feel more involved in their care. We know it’s often common procedure to put a lovey or even a stuffie in a newborn’s isolette. Hopefully this pilot program will help doctors — and parents — understand the important role that scent could play in that situation. Both for the baby’s comfort, and for theirs.