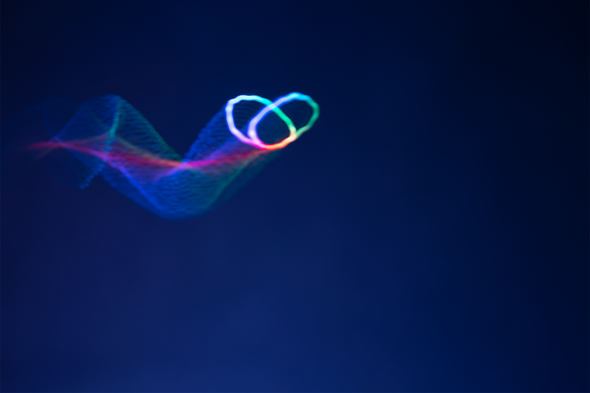 To move visual technology into the future, sometimes it helps to make a little noise. Researchers have harnessed acoustic waves to produce levitating three-dimensional images, create a sensation of touch and even supply a soundtrack.

Since the 1940s, scientists have toyed with the concept of acoustic levitation, the use of soundwave vibrations to trap tiny objects in midair. The technology has gained greater capabilities in the past decade, allowing acoustic systems to push and pull small particles around like sonic tractor beams. Some researchers believe this improvement could lead to applications such as mixing or sorting grains of powder, performing small chemical reactions in isolation, contributing to novel 3-D printing methods—or creating displays that would be visible from any angle.

This type of display is called volumetric: Unlike holographic technology, it can create an image without requiring a screen, and it can be viewed from all sides. Picture it like the message R2-D2 carries from Princess Leia in a very famous film. “I like the Star Wars thing,” says study co-author Ryuji Hirayama, a research fellow at the University of Sussex in England. Hirayama and his colleagues produced their own floating images with a system they call a multimodal acoustic trap display (MATD). It looks like a 10-centimeter box with open sides and a top and bottom that consist of arrays of tiny speakers (512 in all). These speakers emit patterns of sound waves in the ultrasonic range—too high for the human ear to pick up—which sets up vibrations in the air that manipulate a plastic sphere slightly smaller than a sesame seed.

As the bead flies around in programmed patterns, the researchers project changing colors onto it. “We illuminate that levitated particle using RGB LEDs—red, green, blue—so we can control the color of the scattering light,” Hirayama says. Thanks to its high speed—the particle can zip vertically at almost nine meters per second and horizontally at nearly four—the glowing dot fools the human eye into perceiving a continuous image. This phenomenon is known as persistence of vision. The same principle enables a visual trick often seen on the Fourth of July, when the glowing head of a sparkler appears to trace golden outlines as one moves it through the night air. The new volumetric-display technique was reported in Nature on Wednesday.

Other researchers have also worked on visual displays that use acoustic levitation: One Japanese team used a large number of minuscule particles as a sort of shimmering projection screen. And in a paper published this past August in Applied Physics Letters, researchers described a system similar to the University of Sussex project. Yet according to a co-author of the August study—Asier Marzo, a researcher at the Public University of Navarre in Spain—the new system from the University of Sussex is more advanced than any previous attempts. “Their results are much better than ours,” Marzo says. “In the paper that we published three months ago, our particle was going at not even one meter per second. And in the new paper that this group has released from Sussex, I think they can reach up to nine meters per second. And that’s why I think the results are amazing.”

In addition to visuals, the system can also produce audible noise to give the display a soundtrack. And the ultrasound speakers can also concentrate vibrations in one spot so that a finger might feel a sensation pushing back—a little like the object depicted by the floating image is really there. “We created a 3-D display that we can see and we can touch,” Hirayama says. “In this paper, we combine these three modalities: we are using ultrasound, but we can create visual, tactile and audio content at the same time.” This three-pronged approach could, for example, show a blinking and blaring alarm that one might reset with the touch of a finger.

And an alarm clock is hardly the only potential application. “Display without a screen is remarkably versatile and useful,” says Daniel Smalley, an associate professor of electrical and computer engineering at Brigham Young University, who reviewed the Sussex paper for Nature but was not involved in the research. “It means that everybody in the room can see the image—any perspective, location—and that’s extremely helpful.” As a communications system, such a display might one day allow users to chat with a 3-D projection of a person who can turn his or her head to follow as they move around a room. Hirayama also suggests the technology could be used to visualize data in midair. For example, Smalley points out, a 3-D view of the satellites surrounding Earth would provide a more intuitive idea of how space junk is distributed and how astronauts might avoid it.

Although a variety of techniques have been used to produce volumetric displays, Smalley thinks acoustic levitation shows promise. “This particular display is interesting because it’s much closer to commercialization than other types of free-space volumetric displays,” he says. “They use off-the-shelf components, and they’ve demonstrated that it’s not too inertial. My impression was that the strategy was going to be too inertial to work at persistence-of-vision rates—and they’ve proved, with this paper, that’s not the case.”

The display will require a lot more work before you can install it in your living room, however. “So far, this has been done in the research laboratory,” Marzo points out. “And I think we need to push it a little bit harder. We need to do more analysis, more simulations, to see if it would make sense to create a real display that people would have at home.” The current system can only show simple graphics, such as a smiley face or figure eight, in real time (although it can produce the more detailed image of a spinning globe when filmed with a camera that has a slow shutter speed). To demonstrate more detailed visuals—such as a graph or a 3-D visualization of the satellites around Earth—it would need to whip the bead around the display at a significantly higher speed. “You may ask why getting the particle faster is good for the display,” Marzo says. “That’s because the speed of the particle determines how large and how complex the graphics that you can display are.”

Still, Smalley is optimistic about the potential for this type of technology. If the system had only one speaker-covered surface instead of two, he suggests, it could generate images that are bigger than the device itself. “You can’t make a TV image that’s bigger than the TV—even a projector has to have a projection screen that’s bigger than the image itself,” he says. But with a volumetric display, a small, portable device might produce a much larger picture. “You can imagine, in the future, having volumetric displays in watches, for example, that create large images that just project out of your watch.” Or perhaps out of your Star Wars droid.