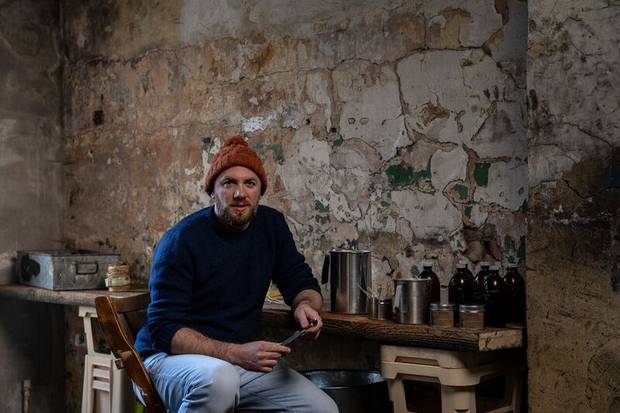 Out of all the senses, smell is one that can conjure a memory, a snapshot in time, so to capture such a fragrance would be precious to many.

Inspired by the smells of Ireland’s landscapes – and other coastlines all over the world – this artisan entrepreneur built his business that would facilitate the gifting of these scents.

From writing short stories exploring the link between smells and memories as an eight-year-old boy, Michael Morris now he creates his own unusual scents for his Belfast-based firm, The Bearded Candle Makers.

“I’ve always had this weird obsession with smells that help you to revive memories. Getting into the perfume industry was the original intention but I just fell in love with candles; and with that came great scope for making smells,” he told Independent.ie.

Michael took the plunge to leave his full-time job in retail five years ago and spent a year studying wax and oils in “a wee shed” at the back of his Mam’s house.

Financed by a small amount of savings and a few odd jobs, he moved back home to focus on getting the firm up off the ground.

“I came out of Queens university with a computer science degree but I was always into the outdoors, and this allowed me to combine both passions into one,” he said.

“I always wanted to work for myself too, I come from a family of self employed people. I wanted to do something different – and I didn’t want to be bored.”

With Black Friday just around the corner, independent retailers are calling on consumers to shop local rather than bulk buying with larger retailers.

Having started out selling his products at Belfast’s well-known St Georges Market, this is a plea that Micheal joins, as he urges buyers to recognise the toil behind truly homemade pieces.

He uses soy wax that is supplied from sustainable family run Kosher certified farms that have with sustainable agriculture at their core.

“From inception to postage, I create every candle by hand, building a special scented memory into each one. Whether it’s a real turf fire [a favourite for gifts to Australia], or midnight mass or the smell of Achill island,” he said.

“The industry is already saturated with smells such as lavender, very generic Irish candles. When I brought my creations to the markets, the response was amazing.”

The Bearded Candlemakers products are now available in a number of Irish stockists, the most successful in terms of sales being the Irish Design Shop in Dublin.

With his mum and a temporary employee still selling stock at St Georges, Michael has just opened a brand new premises in Belfast and is hoping to invest into increasing staff numbers and production capacity to meet retailer demands, mainly from the US.

Michael hosts a number of candle making workshops in Belfast that he maintains is great advertisement as it spreads the word about the authenticity of his products.

He has teamed up with Bushmills Irish Whiskey to host a hands-on evening at Drury Buildings in Dublin on November 27 and 28.

The event is free to attend but places are limited to 50 per night. To register for a place visit blackbushstories.com before Friday November 23.