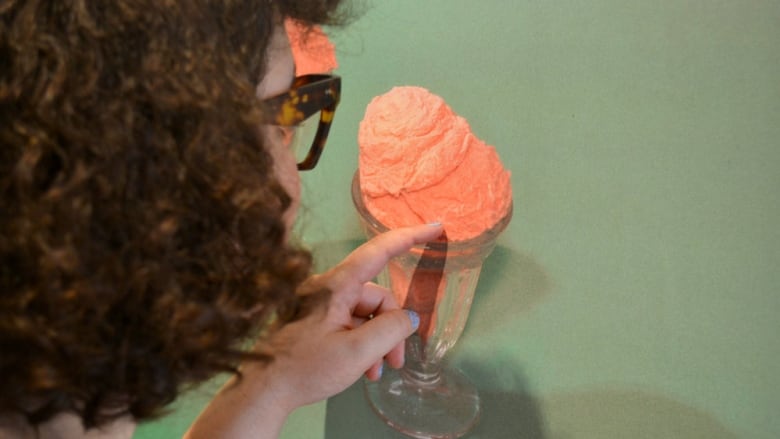 Just hearing a description of Halifax-based artist Emily Lawrence‘s series “Scratch & Sniff Menu” is enough to provoke intense feelings of nostalgia. After all, what could be a more powerful flashback to childhood than a giant scratch-and-sniff photo of a birthday cake?

But despite the immediate appeal of bright colours and retro vibes, these photographs are far from childish or simple. That’s because the foods that Lawrence photographs and their accompanying scents are based on interviews she conducted with Alzheimer’s patients about their food memories, and the sensory and olfactory components are there to enhance memory retrieval.

“Scratch & Sniff Menu,” originally shown earlier this fall at the Craig Gallery in Dartmouth Nova Scotia, depicts a variety of foods: cookies, cake, bread, mashed potatoes, ice cream and pie. Scents have a direct link to the amygdala and hippocampus — parts of the brain which relate to associative learning and memory — and a memory linked to a scent is easier to recall for someone with Alzheimer’s, which impairs short and long-term memory. 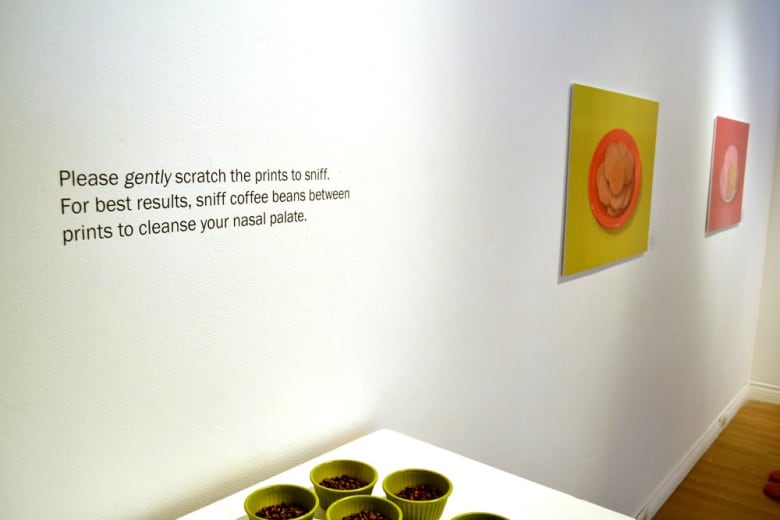 Food has been a recurring element in many of the artist’s projects. In “Mouthfeel,” corn, canned beans, spaghetti, nuts, juice boxes, evaporated milk and hot dogs are juxtaposed in a candy-coloured, highly sexualized video. At the site-specific event “Missing Sock Hop,” guests were given thrills chewing gum, whose packaging matches the aesthetics of many of Lawrence’s artworks. And her exhibition “Hodgepodge” mixes oversized sculptures of ice cream scoops and slices of pie with q-tips and dripping, hairy noses. For the exhibition “For Ruth,” Lawrence explored the links between food, scent and memory in a more personal way.

“So much of my relationship to food I can trace back to my grandmother, and she passed away from Alzheimer’s three years ago,” she says. “Most of my association with her was through food, through the recipes that my dad still makes that were her recipes, and even just the smell of scones on Sunday morning is my strongest association with her.”

Lawrence photographed her grandmother’s favourite foods as recalled by her father, a chef and baker. The project allowed her to study and mimic the saturated colours and the excessive, artificial style of 1950s and 60s cookbooks. At the same time, she researched scratch-and-sniff printing methods with the aim of expanding her project to include other people’s food memories. 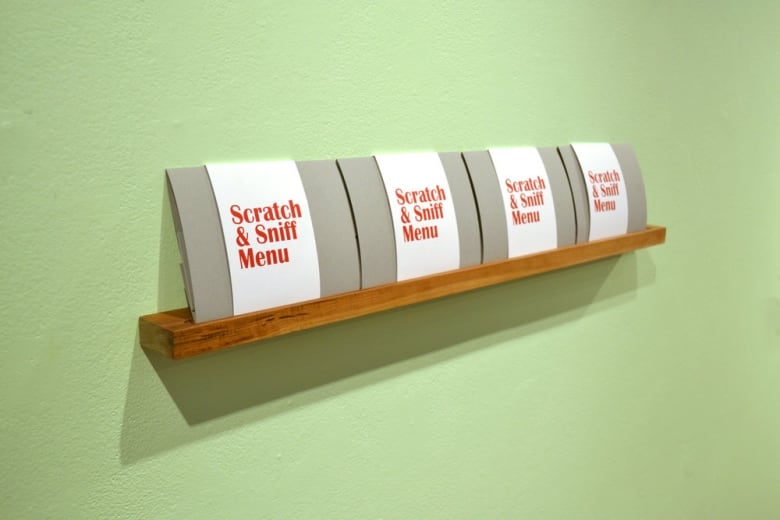 “I find smell and Alzheimer’s really interesting,” she says. “Losing your sense of smell is one of the first indicators of dementia — but at the same time, smell is a strong way to have someone recall their memories, especially for someone with dementia, and especially long-term memories.”

Lawrence connected with The Berkeley, a local retirement residence, and interviewed people with Alzheimer’s and dementia. “I sat for an entire day, interviewing people one-on-one. We had cookies and tea, and I brought a collection of cookbooks I had from the 1950s and 1960s, which I brought because I thought they would be a helpful way to access recipes and memories from their youth. They were all such foodies and bragged so much about their mothers’ cooking. It was so sweet.”

To ensure the photos were accurate as possible, she would figure out the approximate year or decade that the interview subjects would have eaten a particular food and then look at that period’s print advertisements and the popular recipes of the time.

Once she had gathered people’s food memories and chosen the items to photograph, she worked with a printer who sent her scented oil samples and mixed her selections into a varnish coating, which became the scratch-and-sniff layer. 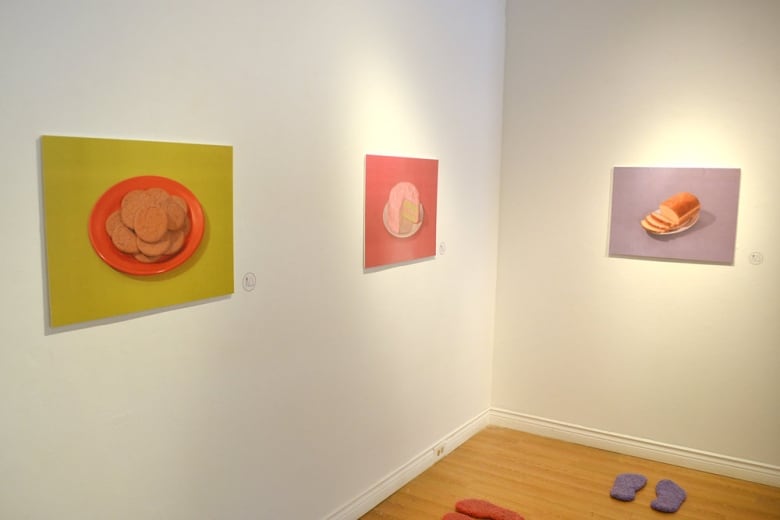 Lawrence plans to continue exploring food in her art, which has been an enduring interest since childhood. Watching her dad prepare baked goods as a child, she “was mesmerized by all of the processes and textures of baking.” She explains: “I really think about those memories as my earliest sculptural memories, and I’m fascinated by the forms and shapes that food can make.”

At the exhibition, gallery visitors couldn’t help but share their favourite food memories with Lawrence. She is aware that smells can trigger negative memories too: “I have this perfume I wore when I was 12, and every time I go into Shoppers Drug Mart and smell it, I suddenly feel so anxious and self-conscious.”

Unlike her art, it doesn’t smell like birthday cake.

Artworks from “Scratch & Sniff Menu” and “For Ruth” will be on display at the MacPhee Centre for Creative Learning in Dartmouth, NS, November 13th to December 14th.