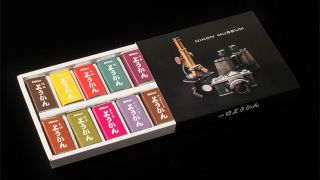 New cameras are all well and good, but Nikon has bucked the trend by launching a new range of confectionary at its Nikon Museum in Japan.

The manufacturer has just announced the Nikon Z fc, an exceptionally covetable retro camera, and it is already such a hot product that the company can’t meet the overwhelming demand. So at least you can fill your empty hands with a box of deliciously sticky confectionary in the form of ‘Nikon Bite Yōkan New 10 Pieces’!

If you’re wondering what yōkan is, it’s a form of wagashi – a Japanese sweet that’s made of anko (red bean) paste, agar and sugar molded into a rectangular shape. Originally a Chinese recipe, it has become a traditional Japanese sweet.

According to Digital Camera Watch, the Nikon yōkan is derived from a product that Nikon had previously sold exclusively to its employees since 1973 in the staff shop within the office. Since opening the Nikon Museum in October 2015, over 10,000 boxes of the confectionary have been sold to the general public.

“This product adds five new flavors of chocolate, blueberry, chili, matcha, and brown sugar to the five flavors of Ogura, salt, Honneri, Yuzu, and sesame that were included in the conventional ‘Nikon Bite Yōkan’,” says the official description on the Nikon Museum website.

The ornate packaging features photographs of iconic Nikon products, including the Nikon F (one of the best film cameras), Joico microscope and Novar 7×50 binoculars.