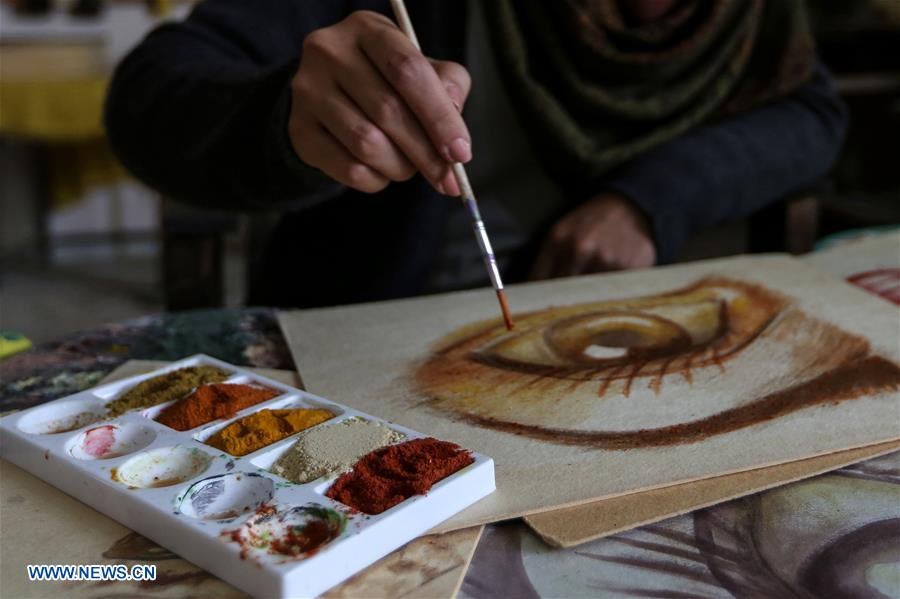 Palestinian artist Walaa Abu al-Eish uses cooking spices to create an alternative painting in the southern Gaza Strip city of Rafah, on Dec. 9, 2018. A Palestinian woman from the Gaza Strip nontraditionally uses fruit and spices as tools for paintings in a sophisticated and interesting way. The experience of artist Walaa Abu al-Eish, 24, is unprecedented, especially as she developed her skills through online research after graduating from the Faculty of Fine Arts of a local university in Gaza. (Xinhua/Stringer)

GAZA, Dec. 15 (Xinhua) — A Palestinian woman from the Gaza Strip nontraditionally uses fruit and spices as tools for paintings in a sophisticated and interesting way.

The experience of artist Walaa Abu al-Eish, 24, is unprecedented, especially as she developed her skills through online research after graduating from the Faculty of Fine Arts of a local university in Gaza.

Al-Eish, who lives with her parents and nine brothers in the southern Gaza Strip town of Rafah, told Xinhua she showed drawing talent when she was young and has been working hard on developing her painting skills.

“I learned a lot and made many paintings with oil, water and charcoal colors and I used all the drawing and art tools,” she said.

“It happened to me by chance when I could not remove a spot of pomegranate juice from my shirt, so I extracted the color from a pomegranate fruit and painted with it. It turned out to be beautiful,” she explained.

She later searched on the internet for videos of drawing using natural materials and fruits, before finding spices that served her well in coloring her paintings.

She added that the smell of spices attracted her as they gave the paintings a distinctive touch of art. “Smell lasts even after a long period of time,” she said.

Using spices such as cumin, cinnamon and pomegranate, she replaces the high-priced materials with cheaper ones.

“I used spices to replace normal colors because they cost a lot of money. The Israeli blockade blocks the entry of many things and drawing tools are rare,” she complained.

Al-Eish noted that each type of tools and colors is different from another in the way of use, adding that spices need special drawing paper to absorb the colors so they will remain longer.

“After many attempts, I managed to draw on the biscuit paper, which gave a natural touch to the painting, and over time the painting retained the smell of spices, which distinguished the painting from the others,” she said.

She drew prominent Palestinian figures and paintings bearing messages about the Palestinian cause and national and social concerns.

She has won first place in a local exhibition on the Palestinian Earth Day, a renowned national Palestinian occasion.

She also participated in a number of local exhibitions related to national events such as the Palestinian Nakba, or catastrophe, and the Israeli blockade which has been imposed on the Gaza Strip since mid-2007.

Along with painting, al-Eish recently started carpentry and woodworks, which were among the most important subjects during her college studies.

“This has also attracted me to make paintings in a different way,” she said.

She started to produce simple woodworks at her family’s home. She is marketing her pieces through social networking sites, which later enabled her to work as a carpenter trainer in a local institution.

Al-Eish took advantage of her tools she has at the institution’s workshop to develop her talent by producing paintings that combine wood and embroidery.

Despite her success, her professional road is not garnished with roses, as the society views her work as male only.

“My success made those who criticized me be impressed by my work,” she said, adding that she is happy to be a working woman who earns an income in light of the low unemployment rate in the impoverished Gaza Strip.

According to the Palestinian Central Bureau of Statistics, 61 percent of young graduates in the Gaza Strip suffer from unemployment.

“I hope I will start my own store where I can sell my artworks,” she added.

Flavour art on canvas | The experiments