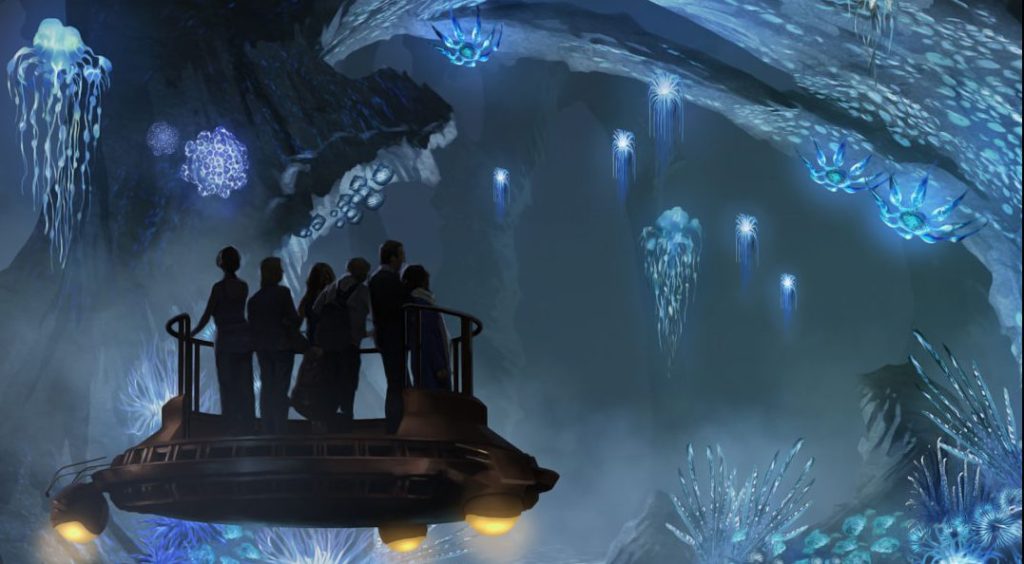 Located on the second level of the Westfield Century City mall in Los Angeles, the venue reprises its intergalactic zoo tour as part of its lineup of original free-roaming VR adventures for visitors 10 and over. Titles also include the cinematic “Lavan’s Magic Projector: The Lost Pearl” and the oceanic “TheBlu: Deep Rescue,” but the experience begins before guests suit up, six at a time, for an immersive full-sensory plunge into VR storytelling.

It begins the moment they walk through the door.

“We worked really hard to not be a VR arcade,” said Bruce Vaughn, CEO of Dreamscape Immersive and formerly the chief creative executive at Walt Disney Imagineering. “I’m obsessed with people stepping into stories and I do not think the experience is only when you’re in the virtual world. It’s the whole thing.”

Dreamscape Immersive is elegant with lots of wood and warm lighting.

After checking in, guests wait for their experience to begin from a lobby area filled with displays and photographs that trigger the imagination and create anticipation for the adventures still to come.

Those adventures transcend time and space.

In “The Lost Pearl,” visitors step into a movie and become adventure stars in search of the missing pearl. Torches light the way through perilous passageways that give way to a hair-raising railcar ride and harrowing rescue all before the end credits roll.

Visitors can expect to see their names scroll across the screen.

“Being able to deliver on that personalization at the end where you see your name is a great advantage of this medium,” Vaughn said.

“Deep Rescue” is a Dreamscape co-production with WeVR, the award-winning immersive content studio behind “TheBlu” at the Natural History Museum of Los Angeles County in 2017. It was inspired by a humpback whale encounter that WeBR CEO Neville Spiteri had while swimming in the Caribbean.

“It was a powerful moment,” he said, adding that virtual reality can give people a similar experience.

Visitors play the hero in “Deep Rescue” when their deep-sea dive among exotic schools of fish, hammerhead sharks and seals is interrupted by an urgent call. They must untangle ropes around a blue whale calf and unite it with its mother, Silvia.

As they accompany the whales (some as long as 80 feet long) to the surface on underwater scooters, divers enjoy whale-tail flips, bubbly underpasses or overpasses and a moment to look in the eye of Silvia before she continues on her journey with the rest of the pod.

“What’s really magical about this medium is you can really feel like you’re there and connect with things in the real world,” Spiteri said. “What better dream than to allow people to swim with blue whales, the largest creatures on the planet.”

Dreamscape Interactive plunges visitors in a 360-degree virtual world filled with real-time sensations, including touch, smells and breezes as well as rumbling vibrations.

Each experience also has a soundtrack.

Next year Dreamscape Immersive adds another experience to its slate of titles, bringing the number of total offerings here to four, although it has room for five. Several other experiences, a mixture of originals and franchise titles, are currently in production with additional stories in the “Lavan’s Magic Projector” and “TheBlue” to come.

“A big piece of what Dreamscape is is the creation of the content,” Vaughn said. “We won’t just let it be a flat experience.”

The new location is part of a rapid expansion effort by the company, which plans to roll out stand-alone and in-theater venues (in partnership with AMC Theatre) outside of California.

Source: Swim with whales at a mall as Dreamscape Immersive opens its first VR storefront

I find that music makes people just sit and listen, firstly. Then, they seem to interpret their own emotions with the music and it makes them ponder their own life a lot. And then they start to question: Am I happy in my work? Am I happy in my relationships? What am I striving for?