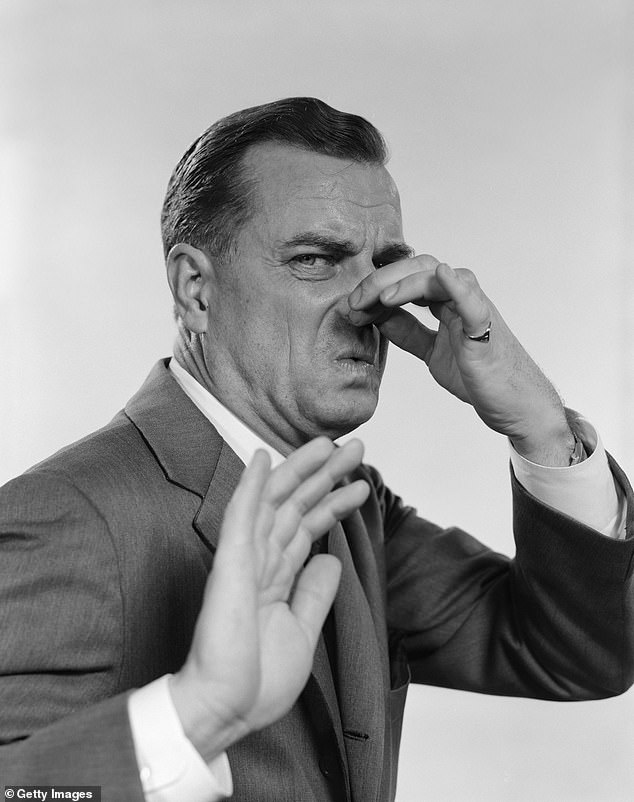 Have you ever borrowed a T-shirt from a friend or a family member, sniffed it, and instantly recognised their unique ‘smell’?

Yet, if someone alerts you to your personal scent, you struggle to sense anything but the pong of your surroundings.

While we might become immune to our own natural smells, we pick up far more information about other people and our environment than we are aware of.

One US study even discovered that blindfolded students could find their way down a windy path by using their scent alone as a guide.

While we might become immune to our own natural smells, we pick up far more information about other people and our environment than we are aware of. Some scientists claim natural body odurs may even lure or deter would-be romantic partners

We all unknowingly produce an invisible cloud of smells that is picked up by others and, some scientists claim, may even lure potential romantic suitors.

On the other hand, some of us release an unpleasant odour that acts as a deterrent to would-be partners.

So, what does your smell say about you?

Some scientists have proposed that the powerful influence of smell could be due to chemicals called pheromones.

These are chemical signals which many mammals and insects produce and which can, unconsciously, affect behaviour. They are detected by an organ in the animals’ nose known as the vomeronasal organ.

In the animal kingdom, these signals are used for many reasons, including sexual attraction.

For example, the female silkworm moth produces a particularly powerful pheromone that, floating on the breeze, can attract males from miles around.

Male mice release pheromones in their urine that speed up the rate at which young female mice reach puberty, accelerating reproduction. 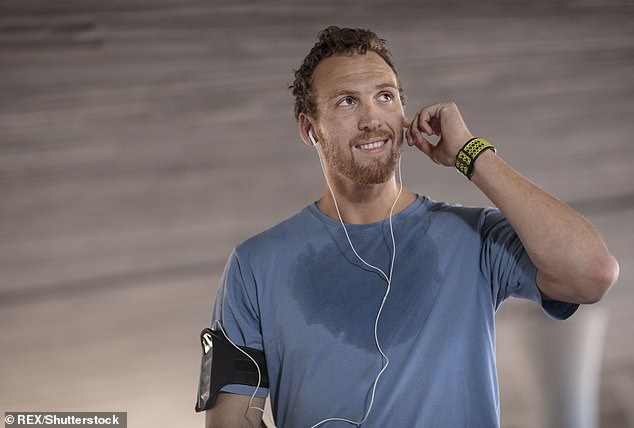 The ‘Smelly T-Shirt Study’ by Claus Wedekind provided more evidence of the profound influence of human smell. Male students were asked to wear plain cotton T-shirts for 48 hours and female students judged the intensity and ‘sexiness’ of the smell (stock image)

So if these potent odours are working wonders for the sex lives of animals and insects, surely they are doing the same for us humans?

Not necessarily. First of all, the vomeronasal organ functions differently in humans and it may not detect pheromones.

And if we can’t detect them, what would be the point in producing them? Despite decades of searching, a human pheromone that stirs our libido has yet to be identified.

But there is some tantalising evidence that the aromas we produce do alter our behaviour, aside from making us avoid those who emit unpleasant gases.

A now-famous American study, conducted in the 1970s, looked at young female students living in a shared dormitory and found that, over time, all their periods appeared to synchronise.

The researcher at Wellesley College in Massachusetts proposed that pheromones produced by some women were picked up by others, changing their menstrual cycle.

As it happened, numerous attempts to repeat the findings failed, and it now seems likely they were due to chance.

He enrolled 44 male and 49 female students and asked the men to wear plain cotton T-shirts for two days and nights. Washing was banned, as was anything that might mask their natural smell. So no curries, booze or aftershave.

After 48 hours, the men put their smelly T-shirts into cardboard boxes with holes in them. The lucky female students sniffed the boxes and scored the intensity, pleasantness and ‘sexiness’ of the smell.

Dr Wedekind had also taken blood samples from all the students to measure genetic differences between volunteers.

He was testing the claim that one of the things we look for in a mate is someone very different to us, genetically, to reduce the chance of inbreeding and boost our ability to fight off infections.

I recently tried the same experiment for a TV programme on sexual attraction. As an added twist, we included a T-shirt worn by a gorilla from a nearby zoo.

Our results confirmed those from the original experiment, and though the gorilla’s T-shirt had a few female admirers, on the whole volunteers were not keen.

As for the dubious ‘pheromone sprays’ sold online that claim to make you sexually irresistible – don’t waste your money.

Most claim to contain something called androstanol, a steroidal pheromone with a musk-like odour, which has gained a reputation as a powerful aphrodisiac.

Androstanol has been shown to be a major turn-on – if you are a pig. The few studies done on humans suggest it doesn’t really do much for us.

Bacteria can keep that whiff at bay

Just as human aromas can turn us on, they can put us off people too.

Most of us use scents to mask the odours coming from our armpits, but for some unfortunate people, no amount of regular washing and deodorants can dilute their rank smell.

That, says Belgian microbiologist Dr Christopher Callewaert – also known as ‘Dr Armpit’ – is because they harbour a lot of a particularly odorous bacteria called corynebacterium. 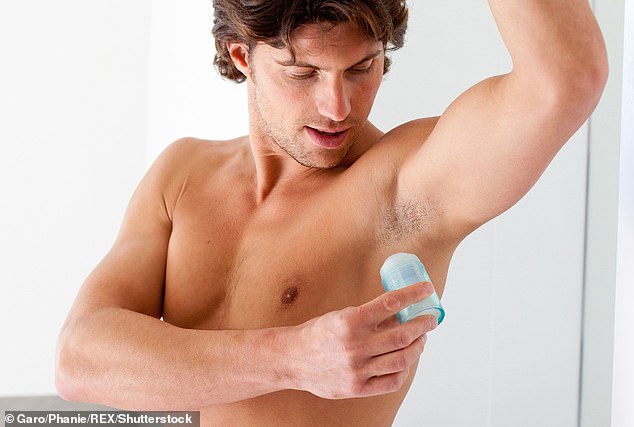 While most people use scents to mask the odours coming from our armpits, for some no amount of washing or deodorant can dilute their smell. Microbiologist Dr Christopher Callewaert says it’s because they an odorous bacteria called corynebacterium (stock image)

He says: ‘Some people with bad body odour are too psychologically distressed to talk to strangers, or even to leave the house.’

A few years ago, he carried out the world’s first armpit transplant, which was not quite as dramatic as it sounds.

After several applications, the stinky armpits seemed to improve.

Using other people’s sweat as a form of deodorant has its obvious downsides, so Dr Callewaert has now produced what he calls a ‘probiotic deodorant’.

This is a spray containing a relatively high concentration of a harmless strain of bacteria, staphylococci, which have been linked to the production of much pleasanter smells.

The idea is that the staphylococci from the spray will displace the bacteria in the armpits that are causing the pong.

Trials show the spray doesn’t work for everyone, but most volunteers were delighted with the results.

Now Dr Callewaert plans to produce a version to compete in the multi-billion-pound deodorant market.

In the meantime his advice to those plagued by BO is to wear cotton clothes and avoid over-using anti-perspirants, as these can encourage the growth of odorous strains of bacteria.