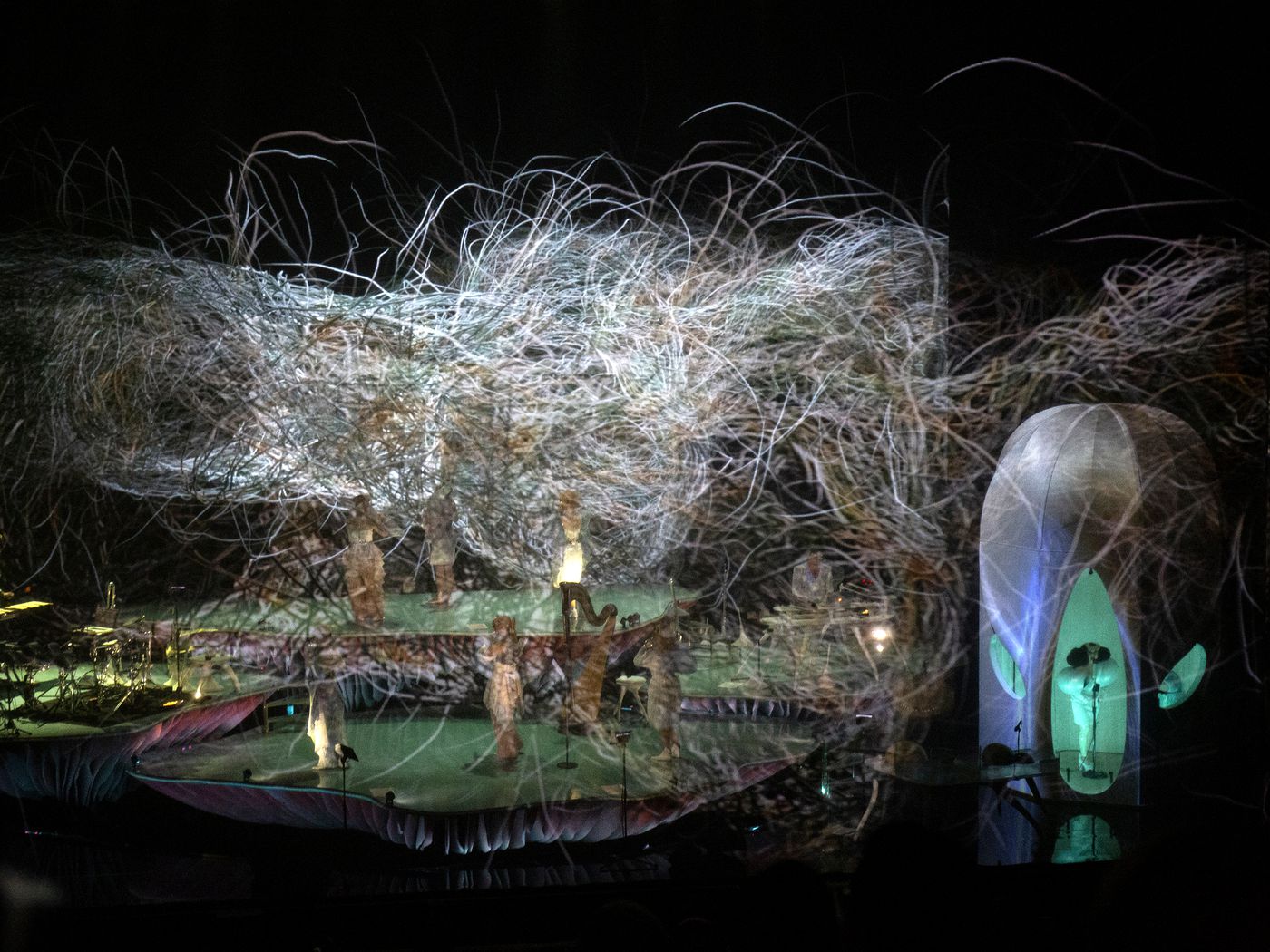 Björk is known for her elaborate performances. For her latest, Cornucopia, she collaborated with the engineering firm Arup on a custom reverberation chamber.

On a bluff on the eastern coast of Iceland, there’s a concrete dome cluster that looks like gray mushrooms sprouting from the earth. It’s a sound sculpture named Tvísöngur, after a traditional Icelandic style of singing. Step inside and sing or whistle or make some sort of noise, and the sculpture comes alive with full, rich resonance. The sounds morph into a different tones and textures as you move throughout the chambers.

For her latest performance, Cornucopia, Björk collaborated with the engineering firm Arup to design her very own reverberation chamber, a space that she could use like a musical instrument to manipulate how her voice sounds.

Björk’s performances today are highly produced experiences, and Cornucopia—a residency at the Shed, a new venue in Hudson Yards, that concludes June 1—is her most daring yet. Along with a roster of collaborators, she created custom costumes, visual projections, choreography, set pieces, and more. She describes it as a concert “where the acoustic and digital will shake hands.” This is where the reverberation chamber comes in. It enables Björk to bring the aural quality of a small-room performance to a sold-out concert hall.

“She wanted to hearken back to when she would discover spaces on her own, like walking into a room within a church or a house or a library and feel the resonance of that room and explore it with her voice,” says Shane Myrbeck, an acoustic designer at Arup who worked closely with Björk on the chamber.

“She always describes the different voices she uses with amplification—the pop by voice that she sings into a microphone with—and then the other more personal, intimate voice that she uses an acoustic space. She wanted to take that voice and transport it to a live stage experience.”

Some spaces naturally resonate and the acoustics depend on their dimensions and the materials they’re made of. Think of what it sounds like singing in a tiled bathroom or the echo in a long hallway. Björk used words like “sanctuary” and “chapel” to describe the type of setting she wanted to replicate, and that she wanted a long, lush reverberation.

“She described it as kind of full and shimmery and all these different aspects that are tied to the materiality of concrete,” Myrbeck says.

Arup tried to find real-world spaces that might give Björk’s voice the resonance she wanted. They ended up at the Sound Column, an installation at the Palace of Fine Arts. Then, they used a computer model to map how sound waves reflect and mix together in the space, and tried to replicate the same acoustic properties in a smaller structure that could be transported while touring and quickly repaired if needed. At one point, Björk toyed with the idea of wearing the chamber, like a dress. After considering a number of options, a 16-foot-wide, 10-foot-wide octagonal dome made from plaster-coated wood turned out to be the winning combination.

The walls of the resonance chamber are very close, and it’s tall like a column. The structure is composed of ribs, as in a Gothic cathedral’s vault. Sound waves reflect off the walls very quickly and depending on where Björk stands—along the sides or in the center—the waves will achieve a different mix. And while the space was designed to mimic un-amplified resonance, there’s still a microphone inside.

“She can be very interactive with the acoustics of the space,” Myrbeck says. 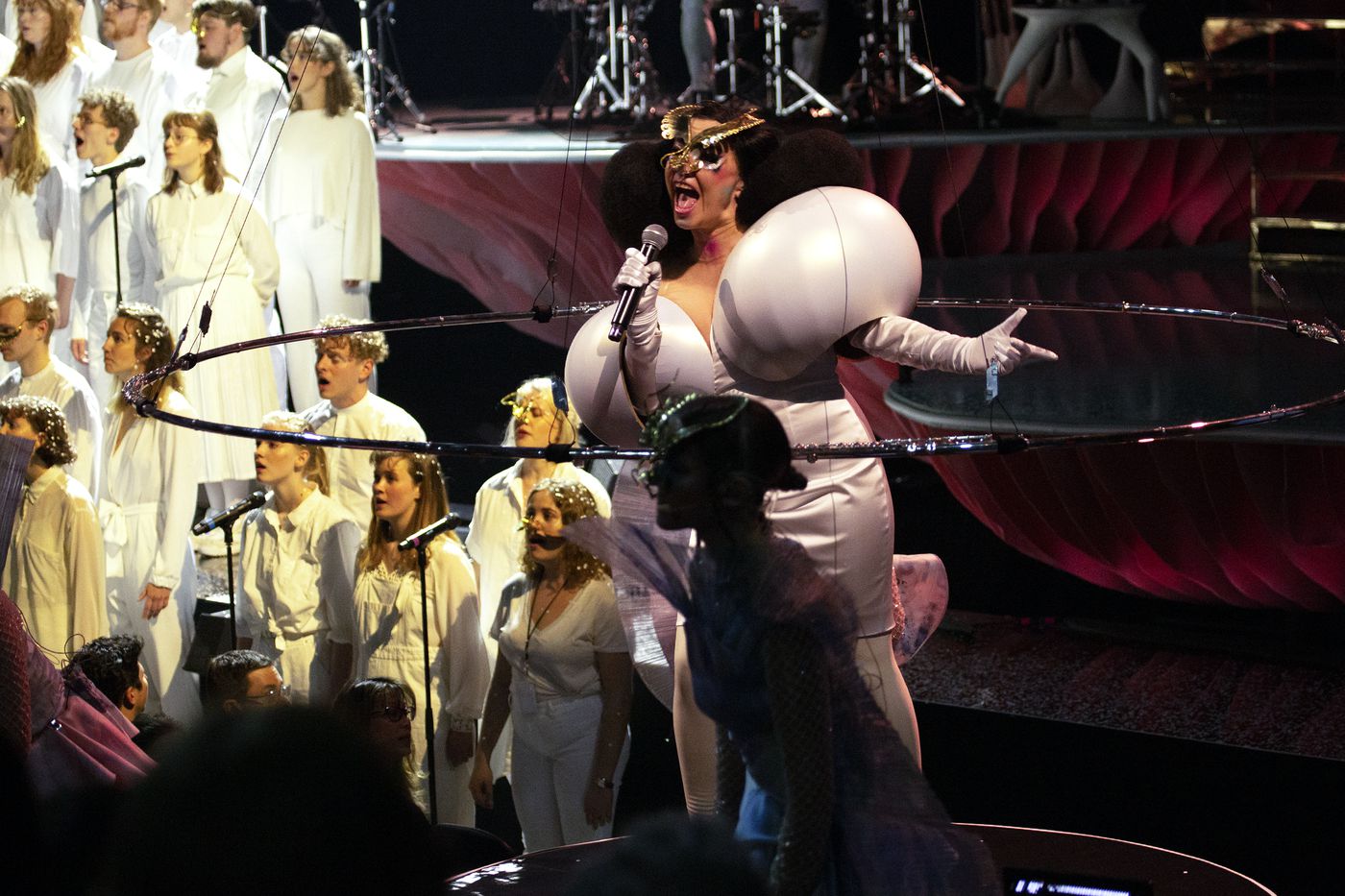 Björk performed Cornucopia at the Shed, a new performance space in Hudson Yards, from May 6 to June 1, 2019.
Santiago Felipe. Courtesy of Bjork and Arup.

Through most of history, architecture, composition, and musical instruments have evolved together. Simple, harmonious melodies with few notes work in a tall cathedral, where the sound lingers and mixes. A fast, intricate Mozart piano piece would quickly devolve into cacophony if performed in such a space. Wagner designed his own opera house to accommodate a larger orchestra than what was typically used at the time. The term “reverb chamber” actually goes back to old recording studios: Before digital processing could create reverb, producers would play a track in an empty concrete room and record the effect.

“Pieces of music are almost designed for the architecture in which they sit, so there is a symbiotic relationship between that which exists really until the middle of the 20th century,” says Raj Patel, Arup’s global leader of arts and culture. “Now, people are going back to site specific works again.”

Arup flipped the script on that relationship by designing a space for a performance, honoring history and while being rooted in experimentation. That perfectly sums up who Björk is as a performer.

“Björk finds herself simultaneously tied to this long and ancient history of singing, which is one of the oldest things you can think of, and then being a cutting-edge technologist at the same time,” says Myrbeck. “A really nice thing about this chamber [is that] we used a very technical process to design it, but the effect of it is to strip all that away and just have this pure acoustic experience.”