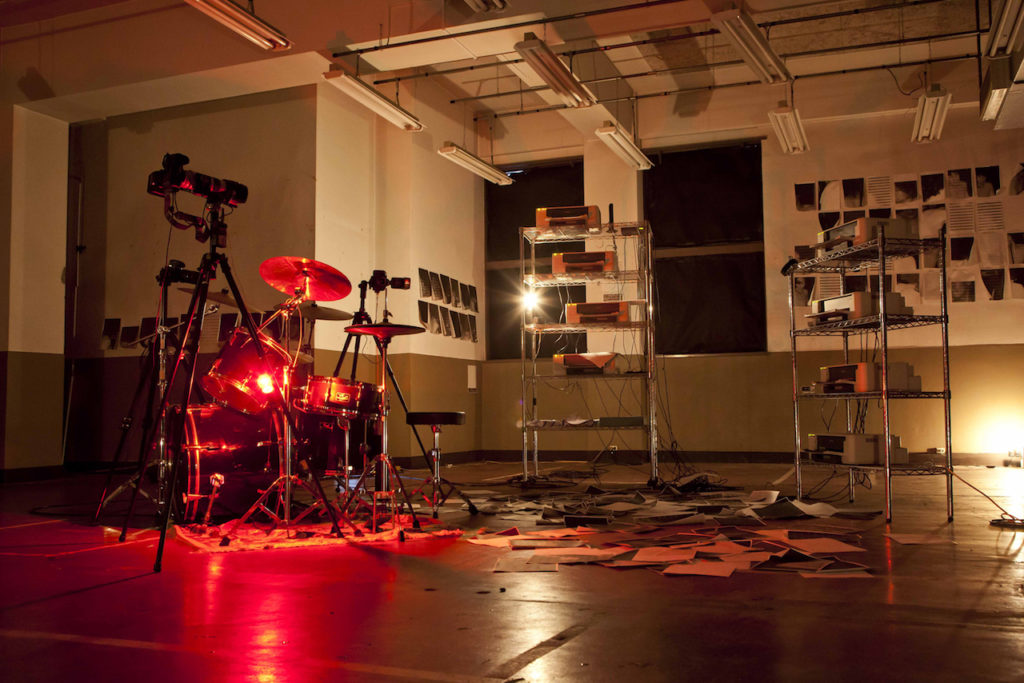 Yusuke Yamatani’s drum performance begins with a crescendo of cymbals. It is pitch black, but as the bass and snare drums kick in, intermittent strobe lights fill the gallery, activating sensors that set off three cameras positioned around his drum-kit. A nearby printer is hooked up to the equipment, and mass-produces 500-or-so images of Yamatani throughout his 15-minute performance. After the show, the photographer randomly gathers his new prints, binding them into books on the spot.

The idea developed from Yamantani’s desire to “embody the mechanisms of seeing and being seen,” and to question the discrepancy between the image that flashes before his audience’s eyes, and that which the camera captures. According to Yamatani, one audience member commented that “it was as if the photos were being printed directly on the retina”. The resulting images vary from close-ups of Yamatani’s face – some capturing the twinkle of joy and adrenaline, often present in the eyes of a performer, while others are more distorted and awkward – to tightly cropped, abstract shapes created by his body parts.

As the bass and snare drums kick in, intermittent strobe lights fill the gallery, activating sensors that set off three cameras positioned around Yamatani’s drum-kit

The performance is titled Doors. The inspiration for it began with the rock band, The Doors, whose name originated from Aldous Huxley’s essay The Doors of Perception. This was in turn inspired by a line from a poem by William Blake: “If the doors of perception were cleansed, everything would appear to man as it is, infinite.”

“I related to this line,” says Yamatani. “The foundation of my work, and what Jim Morrison and Aldous Huxley were trying to express, are similar. They tried to open the doors of perception through drugs and music, but I am taking a more primitive route, driving my body to its limit and trying to look into my subconscious.”

The photographer does not identify as a musician, however until he discovered photography at the age of 22, he was a drummer in a hard-core punk band. “I was getting bored of the structure of a band, ” says Yamatani. “I wanted to do something by myself. That lack of cooperativeness may have been the reason why photography suited me –  on the one hand, it is affectionate, but, on the other, it has a certain coldness.”

In 2010, several years after discovering photography, the Japanese met Shomei Tomatsu. The renowned post-war photographer offered guidance and introduced him to the monochrome work of practitioners such as Daido Moriyama and Takuma Nakahira, which would come to inspire Yamatani’s early work.

“By creating a situation where the audience also feels that they are being seen, they too can experience the reciprocity of the gaze”

Doors is Yamatani’s first performance piece, but the photographer has collaborated with audiences and employed more conceptual approaches to photography before. For Ground (2013-15) he photographed a segment of the dancefloor in several clubs around Tokyo, pasting the print over the same spot that he captured. After a night of partying, the prints were trampled, and stained with alcohol and cigarettes. “They were like garbage, but also emanated vitality like in the works of Jackson Pollock or Kazuo Shiraga,” says Yamatani. “The records of the night shared by these people were explicitly etched onto the print. I had a feeling of confirmation then that that was precisely what photography was.”

After presenting Doors for the first time in Kyoto last spring, and a successful Kickstarter campaign, Yamatani will be touring the performance around Europe, with gigs in London, Amsterdam and Poland already confirmed. Until this year, Yamatani would position his tripods to capture specific angles, but now, he has two cameras set up on a rotating pan head, to capture photographs of his audience as well. “By creating a situation where the audience also feels that they are being seen, they too can experience the reciprocity of the gaze,” Yamatani explains. “I want to incorporate a documentary aspect when touring the performance, and I am excited to see what will be captured in Europe.”