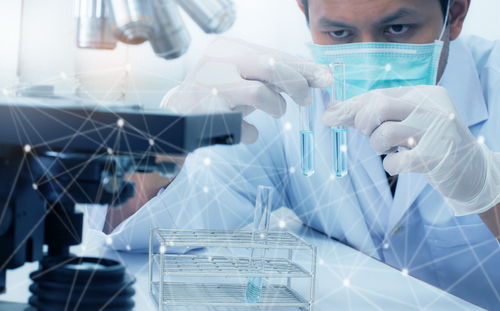 By msensory team08/08/2019No Comments
A highly sensitive “sniff-cam” is able to detect tiny levels of ethanol in the breath even without alcohol consumption, according to new research. The findings suggest potential applications in studies of Parkinson’s, diabetes, and cancer.

The study, “Ultrasensitive Sniff-Cam for Biofluorometric-Imaging of Breath Ethanol Caused by Metabolism of Intestinal Flora,” appeared in the journal Analytical Chemistry.

Certain diseases and metabolic conditions may generate specific scent molecules called volatile organic compounds (VOCs), but the change in their concentration is normally too small to be detected by human olfaction. Also, as VOCs are also contained in the breath and skin secretions of healthy people, and as their levels vary with factors including smoking, sex, and body mass, determining their correlation with disease states has been challenging.

The systems used to date to measure VOCs have been bulky and expensive, and require trained professionals to operate them. In turn, smaller and more cost-effective options have shown lack of selectivity.

More recent techniques have coupled biochemical analysis with imaging. These so-called bio-sniffers — fiber-optic biochemical gas sensors — have taken advantage of enzymes dependent on a cellular molecule called nicotinamide adenine dinucleotide (NAD) to achieve high selectivity. These approaches can effectively measure ethanol, a product of the microbiome — the community of bacteria, viruses, and fungi that live within our bodies — and be an indicator of glucose (sugar) levels.

A gas visualization system was then developed to measure ethanol release by the skin after alcohol consumption. However, its ability to detect ethanol levels was inferior to that of bio-sniffers.

Aiming to address this gap, a team of Japanese researchers built an optical system containing an ultraviolet ring light, a red-green-blue camera, two filters and a novel image-analysis method that tracks the fluorescence of a form of NAD (NADH).

In the new method, an enzyme mesh creates a reaction between ethanol and oxidized NAD (NAD+), producing fluorescence, which is then recorded with the camera.

The system was then tested in 10 healthy men (ages 24–28) who had not consumed alcohol, smoked, or taken a medication within 72 hours of the experiment.

The measurements, performed during a four-hour period of fasting, revealed that the sniff-cam was able to detect even minuscule amounts of ethanol in the breath. Of note, the average concentration of ethanol was similar to that reported in a prior study, conducted over a two-hour period during consumption of a sweet drink or meal. However, unlike the sniff-cam, this previous work used a non-portable system.

“Because of the versatility of this system, the sniff-cam created in this study is expected to allow a noninvasive and systematic study of the relationship among the spatiotemporal information on VOCs, diseases, and metabolism,” the scientists said.

They also noted that the new system may be smaller if adopting a more compact UV-LED and image sensor. “Therefore, the sniff-cam system may be used in smartphones in the future to allow people to simply monitor their own health status.”

Source: ‘Bio-Sniffer’ that Detects Ethanol in Breath Could Be Used in Parkinson’s