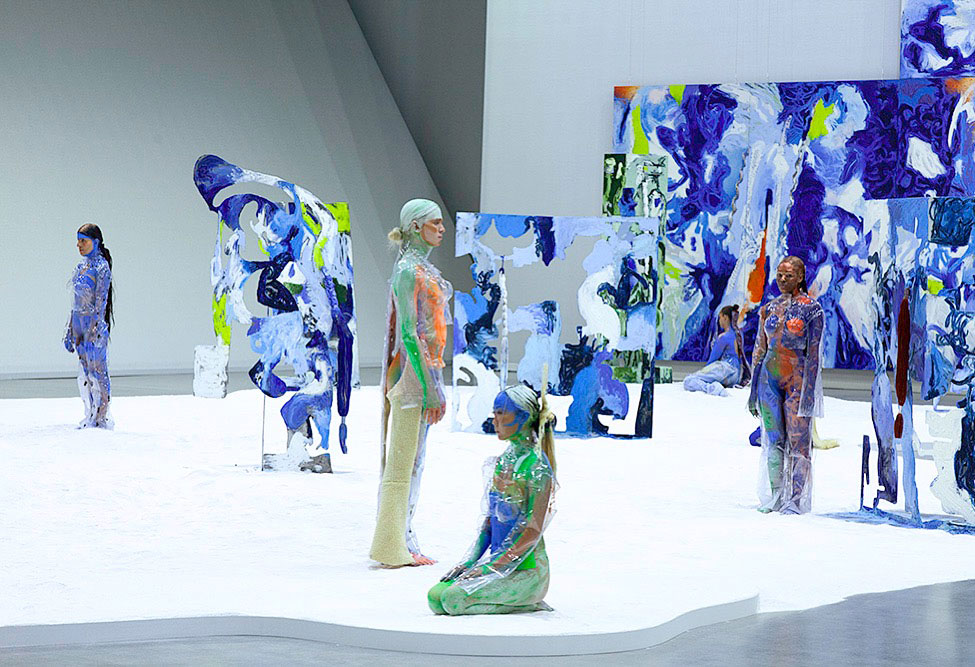 We’re in a moment of identifiers and categories being the compasses by which we navigate the world. We delineate personas based on aesthetics or superficiality. There are, however, people who are creating work in order to subvert these norms. Donna Huanca continues to break down barriers of conformity with her interdisciplinary work. The artist transcends genre and, instead, values mutability and interaction. Huanca celebrates her first major United States solo exhibition with “Obsidian Ladder” now at the Marciano Art Foundation. The site-specific work features the eponymously titled center piece: a massive painting in eight parts as well as sculptural work and a calendar of performances that will accompany the show. Running through November, choreographed performances and public programming talks will comprise a major part of “Obsidian Ladder.” Huanca also includes sound and scent to create an all sensory triggering experience. Cultured caught up with Huanca before the show to get a taste of what’s in store.

This show combines so many art forms and really seems to function at the intersection of identity and praxis. Was your approach different for this show than “Lengua Llorana”? How did the Marciano space lend itself to “Obsidian Ladder”?

Since my work is so heavily influenced by the self, the body, and the subconscious, the approach to each show lends itself to the ever-changing and fluid nature of these ideas. However, “Obsidian Ladder”specifically defies the space at Marciano which is the site of a former Masonic Temple. A longstanding symbol of male power and brotherhood is transformed to a realm of femme spirituality.

Is there generally an order you follow in creating the paintings, score, scents, and chores?

All elements in my work are created from and within one another and the process has always been a type of meditation itself. The idea of order isn’t necessarily the driving force of productivity, but more so a flow and intuition of the mind and body. 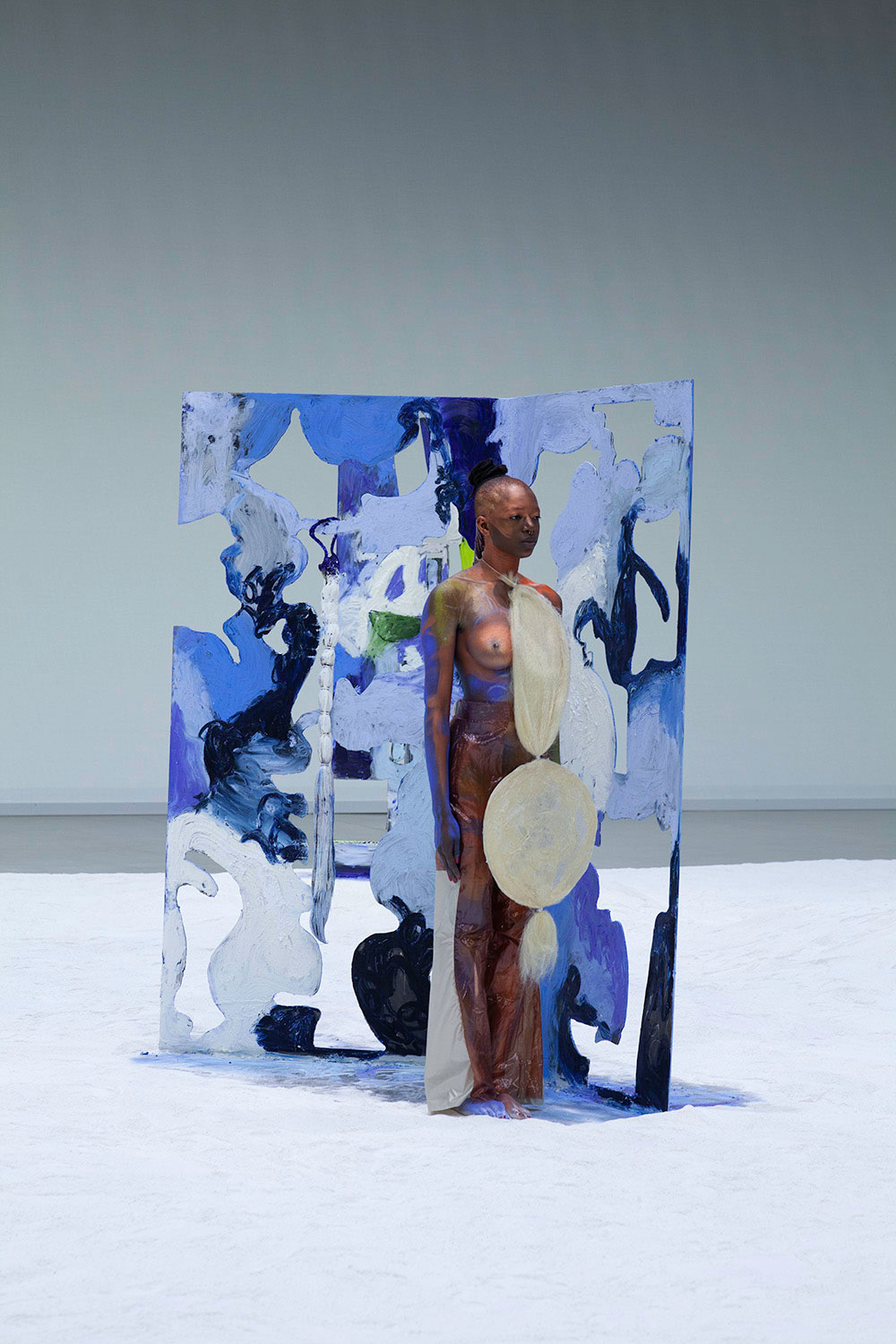 How did you cultivate the scents for the piece? Is there a different process depending on location, venue, etc?

The scent, particularly for “Obsidian Ladder,” I wanted to recall memories of a particular market in Mexico City and create an essence of body odor, bleach and burning feathers.

Phones have become such an invasive, but accepted tool while watching or interacting with a performance piece. How do you navigate that space as someone who prefers that no one is on their device?

By using sound, scent, body movement, painting and sculpture, my performance work provides as a very meditative experience for the viewer. As someone who has been practicing meditation for several years, it’s a necessary tool which heavily influences my work. However, at this point it’s almost second nature for someone to want to photograph such a multi-sensorial experience, but in actuality the phone acts as a disruptor to this experience, not just for yourself, but also for the collective audience. 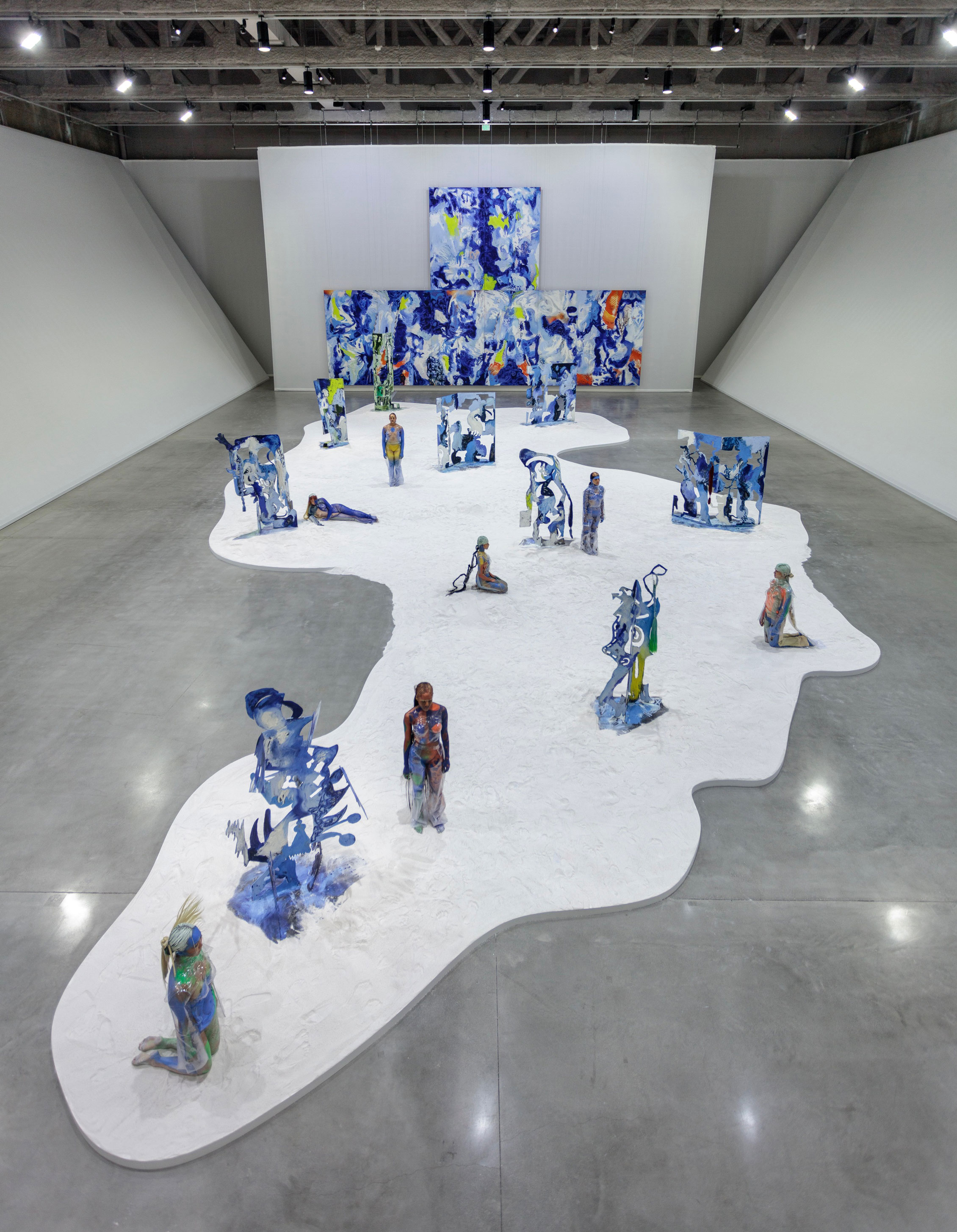 I remember the first time I read the Cyborg Manifesto and my understanding of feminist theory shifting entirely, particularly in regard to the combination of natural roots and live matter with the post-human and machine life. Can you speak to the ways in which you incorporate cyber-feminism into works that are so rooted in your Bolivian background?

My work exists as a politically charged testament regarding intersectional feminism, and the femme body, in relation to a rapidly changing modern society controlled by a patriarchal dialogue. As an artist, I have to ask myself, especially in terms of both the genetic or physical, conscious or subconscious existence of myself, how can I create a completely new realm of communication, with other beings or forces beyond our current comprehension.