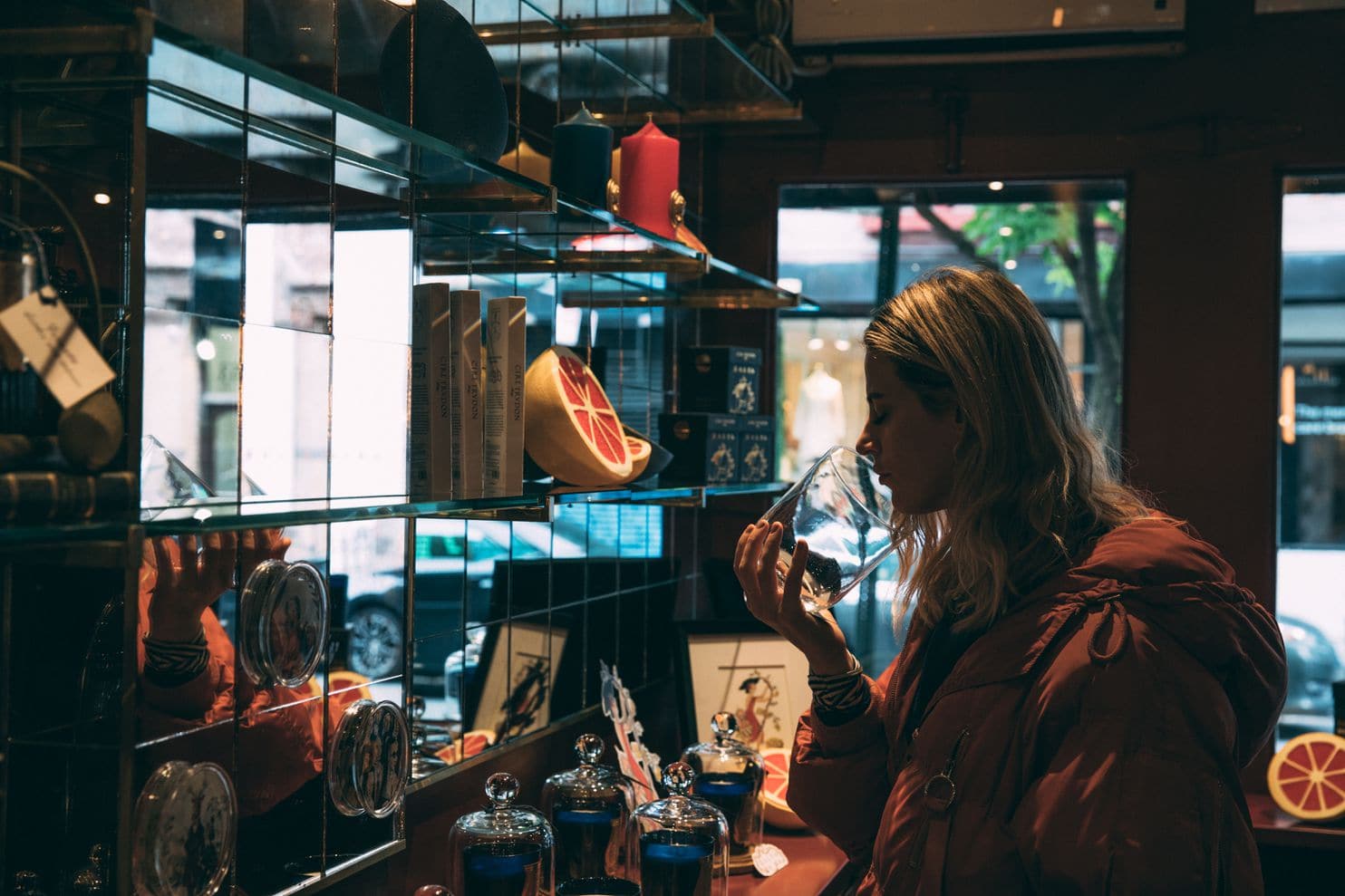 Does this train station smell like … grapefruit? How the air around us suddenly became so fragrant. | The Washington Post

By msensory team14/05/2019No Comments
Lindsey Adams, 32, smells candles at Cire Trudon in Manhattan during Sniffapalooza, a festival that takes the scent-obsessed through New York’s fragrance boutiques. (Celeste Sloman for The Washington Post)
By Lavanya Ramanathan

In 2007, when Spence Levy started selling air — air that smelled good, to be specific — it wasn’t exactly easy.

So Levy trekked along Miami’s famed Collins Avenue, visiting one sprawling white deco hotel after another, asking whether he could pump the scent of green tea, perhaps with a bit of lemongrass, or maybe bergamot or oud, into the lobbies for a week, no charge.

Miami is packed with these old buildings, and with pools and wet towels, and smokers, because it is libertine about lighting up, even in bars and on beaches. The air can be mildewy and it can be stale, and all of this wafts, along with the occasional whisper of hot trash, directly into the faces of tourists.

Levy and his cousin, who first came up with the idea, realized they could mask all of it, room by room — like Febreze for an entire city. A few hotels in tourist-trap South Beach had already begun to scent. Soon, Levy had convinced the rest.

These days you can step into the lobbies of the Delano, the 1 Hotel or the Shore Club, and you’ll find yourself practically swaddled in heavenly smells, many of them piped in through the ventilation system by Levy’s company, Air Esscentials.

But recently, Levy noticed that his clients no longer wanted merely to cover what was unpleasant. Tourists had been posting reviews about how good their hotels smelled, and now, hotels wanted to ensure that their scents were unique. They wanted to smell like “ocean driftwood,” or the tobacco of an unlit cigarette. “We ask what feelings or emotions they want to convey, the demographics they want to attract,” he says.

The business of making everything smell nice is booming, extending to casinos and theme parks and even residential buildings. Every SoulCycle smells like grapefruit; it is the SoulCycle smell, and if you like it, you can buy it in candle form. The Equinox hotel at New York’s dystopian city-within-a-city Hudson Yards hasn’t even opened, but it, too, has already lined up a signature candle to burn in its lobby: Cire Trudon’s Abd El Kader, which is advertised as smelling like mint and tea and tobacco and “the rashness of fights.” I recently smelled one of these $100 candles, and I can attest that I died and was revived in the same breath.

At home, we’re also swaddling ourselves in scent, not just candles but the room sprays, plug-ins, wax melts, “car diffusers,” and assorted fancy-smelling sundries we buy, to the tune of $4.2 billion in 2017, according to market-research firm Kline.

What’s behind our need to bathe in rarefied air? 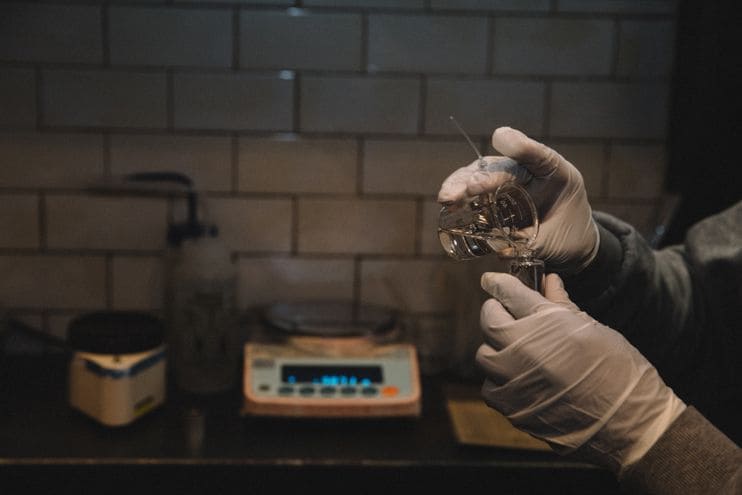 At Le Labo on Elizabeth Street in Manhattan, fragrances can be personalized. (Celeste Sloman for The Washington Post) 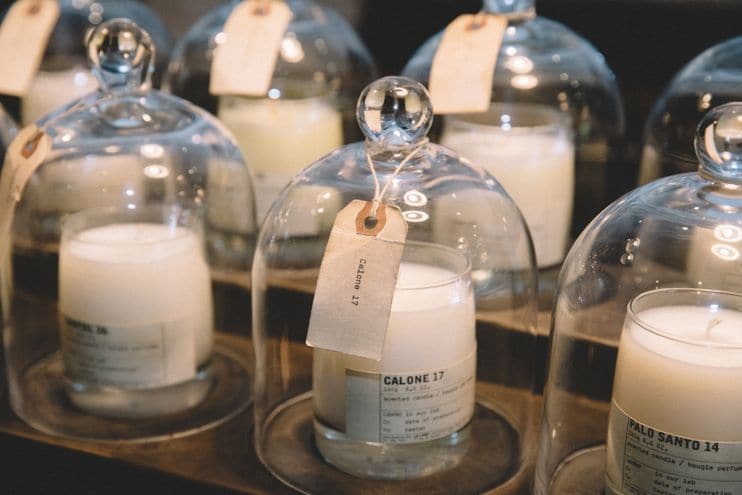 Candles at Le Labo, part of the home fragrance business estimated at $4.2 billion in 2017. (Celeste Sloman for The Washington Post)

So we turned tree resins and herbs into incenses and simple perfumes, until Jicky, the first perfume that included lab-created notes, arrived in Paris from Guerlain in the late 1800s. It smelled like lavender and lemon and also civet, a note derived from the anal glands of civet cats. (The fragrance world is full of strange “animalic” smells, like musks and ambergris, that seem to deepen scents, making them seem sexy.) Jicky was enough of a hit that it was joined (in 1921) by Chanel No. 5 and eventually a host of other perfumes that came to signal wealth, class and sophistication.

Our noses are like a 70-mile-an-hour highway to our emotions, says Pamela Dalton, an olfactory scientist at Philadelphia’s Monell Chemical Senses Center, a 50-year-old nonprofit institute. Our sense of smell connects to our limbic system, the same one responsible for arousal and other primal instincts.

There are those who claim to hate scent, or have “sensitive noses.” But that’s probably because particular smells trigger a stress response, “like being accosted with the sound of death metal,” she offers. Even still, “fragrance-free” products, like laundry detergents, are poor sellers. Most of us want to be scented to.

The question, then, is, “Why are we spending so much money on it?” Dalton asks with a laugh.

I ask David Moltz, the perfumer for the Brooklyn-based D.S. & Durga. He says that when he asked social media followers what candle they wanted him to make, their overwhelming response was “after rain.” He created two: Big Sur After Rain (described as “rainwater in eucalyptus groves off Highway 1”) and Concrete After Lightning (“electric crackle,” “sizzling asphalt steam”).

What his fans really were searching for, he believes, “was realness.” I tell him it sounds like they wanted the smells of things urban-dwellers had abandoned long ago. They wanted nature.

Moltz agrees, a hint of melancholy creeping into his voice. “The larger narrative of our civilization . . . in order to push things forward as a society, we do need technological advances. We need to be living in cities; it’s more efficient. But there’s a spiritual detriment to that.”

Perhaps we’ve surrounded ourselves in scent to fill the gap.

“Perfume,” he muses, “is fooling you into smelling stuff that is not there. It’s very much sleight of hand.”

In the home fragrance business, there’s no bigger obsession than the candle, and no bigger candle than Yankee.

Yankee Candle, those homely glass jars of crayon-colored wax, arrived in the late 1970s with a fairly basic array of fragrances: Bayberry, Pine, Cinnamon, French Vanilla and so on. What made them different from every candle that came before was that they were scent bombs, loaded with oils. They were exactly what people wanted: to be enveloped in good smells.

Today, Yankee Candle has hundreds of scents, many fairly straightforward (Pineapple Cilantro), others abstract almost to the point of comedy (how exactly does a Wedding Day smell, or Moonbeams on Pumpkins?). It also has hundreds of increasingly elaborate competitors, from electronic oil diffusers to scented matches.

But “scenting,” which brought this idea into public space, was popularized by Abercrombie & Fitch. Abercrombie had a house cologne, Fierce, said to have notes of “marine breeze” and sandalwood — but to anyone who was in a mall around 2002, when Fierce launched, it smells like teenage insolence. Fierce was pumped into every location (and reportedly spritzed onto every garment) as a policy, and spilled out into the corridors of malls as a marketing tactic.

It was like catnip to teenagers, surreptitiously keeping them shopping longer. And Fierce (along with the seminude photos and the music cranked to just shy of earsplitting) aggressively kept out everyone else, says Aradhna Krishna, a sensory marketing expert and professor at the University of Michigan’s business school.

A couple of years ago, after complaints from Yelpers, protests from environment-conscious teens and (perhaps unrelated) plummeting sales, Abercrombie announced that marine breeze would no longer flow from the HVACs. (“Does this mean I’ll no longer choke while walking by their store??” one woman tweeted upon hearing the news.)

You’d think the uproar would have been the death of scenting. But one of Fierce’s perfumers, Christophe Laudamiel, found a thriving future. These days he also scents, calling himself an “air sculptor” for hotel-casinos such as the Hard Rock, and shops such as Bliss and New Balance.

And Levy’s company offers better-smelling air to 6,000 places, including hospitals and urgent-care clinics, because, he says, smell calms people through an emergency.

When a new Florida rail system called Brightline also reached out for a signature scent for its stations to make its riders feel “energized” about riding, they settled on a base note of grapefruit. Just like SoulCycle.

One venue asked Levy for bacon — or rather, a close molecular approximation — that it could pump outside its doors to woo diners. Levy presented three possibilities: smoky, barbecue and sizzling. Sizzling bacon won out.

“People are bombarded so much with visuals,” Levy says. “Scent is the ninja of marketing. We found another way to make that imprint in the brain, to make people feel comfortable.” 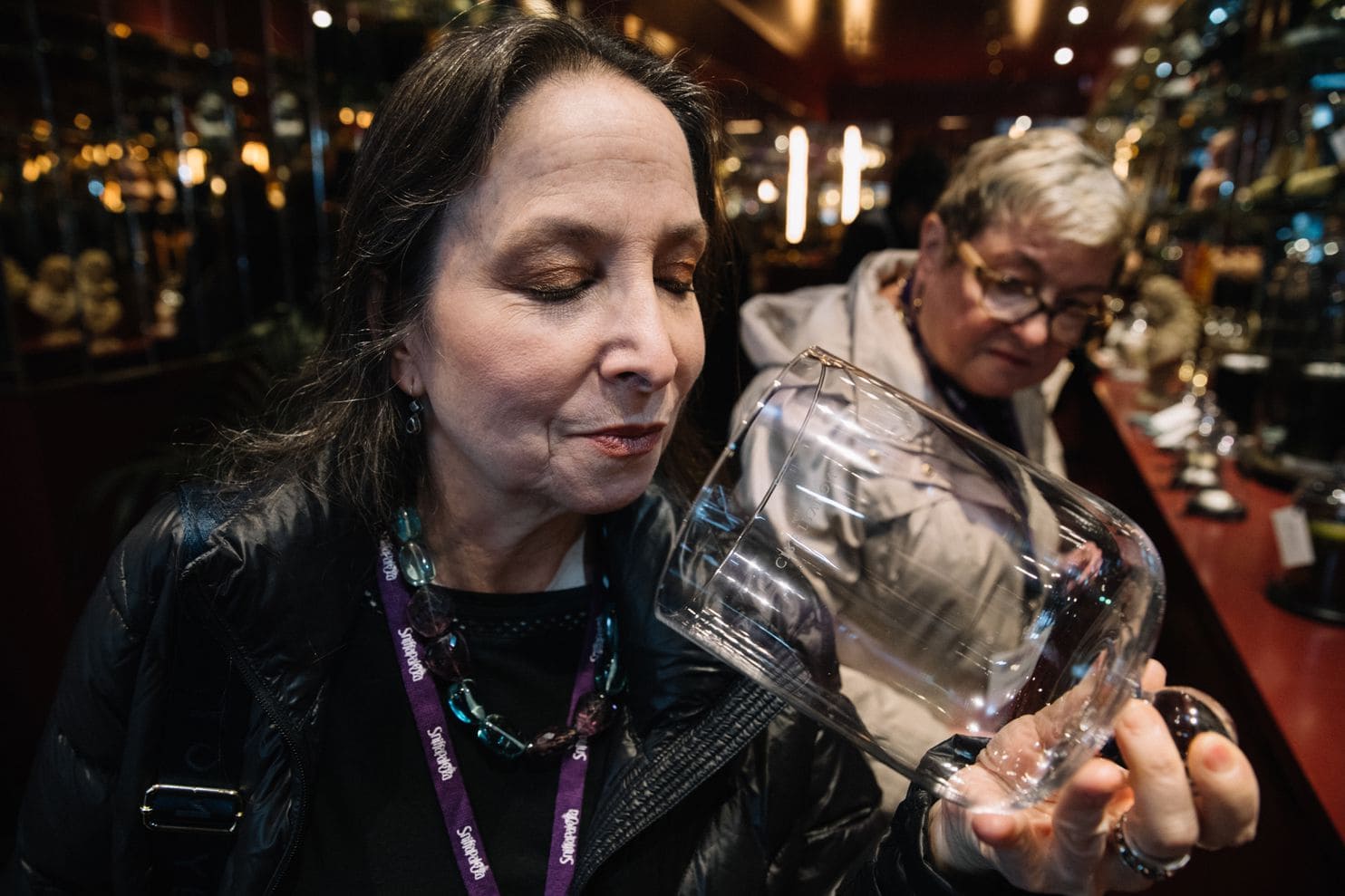 For Karen Dubin, founder of Sniffapalooza, a lifelong scent obsession started with her grandmother’s soap. (Celeste Sloman for The Washington Post)

Sniffapalooza was founded in 2002 by Karen Dubin, a copywriter and mother who had realized that there might be others out there like her, others who felt a pure, visceral joy whenever white flower or santal caught their noses. They are the sort of people who claim to know instinctively an oud (the rich, nutty scent of agarwood) from a vetiver (the green, woodsy note of marsh grass). Twice a year they make a pilgrimage from Connecticut, Texas, Maryland, France and elsewhere to tour New York’s best stores for sniffing.

Dubin, like almost everyone I meet at Sniffapalooza, remembers the first time a scent bored its way into her psyche. It was the smell of luxurious soap, ferried back from a European cruise by a grandmother, setting in motion a lifelong obsession with Carven’s Ma Griffe, Chanel No. 5, and her very first scent, acquired at age 6: Lanvin’s Arpege.

She has her own theory about why so many of us will unapologetically burrow our noses into the cold wax of an unlit candle, or linger in a sweetly scented hotel lobby.

The reason is longing.

Longing to be any place besides this godforsaken cubicle (try the temple-ish palo santo!), longing to be someone else, someone of means (bergamot, the bumpy orange of the Italian seaside, may do it for you).

“Fragrance,” Dubin says, “is and always has been the promise of a better life.”

To help us better understand this, Dubin takes to us to Editions de Parfums Frédéric Malle, on the Upper East Side. Bottles and candles are displayed like pieces of art, and modelesque gallerinas — er, perfumeinas? — flit about, curious about what you want out of scent, prodding you to figure out who you are. I have no idea, obviously.

A friendly young Frenchman wants to know if he might have a sniff of the perfumed strip I’m holding. It smells like lemons, I guess. But when he lifts it to his nose, he recoils like he has found himself in, well, unscented Miami.

As he leaves, he suggests I smell a candle called Cafe Society.

I lift the glass dome and inhale. It smells like day-old cigarette smoke and boyfriend cardigans, all of it distant and fuzzy, like a memory. I love it.

Source: Does this train station smell like … grapefruit? How the air around us suddenly became so fragrant. – The Washington Post