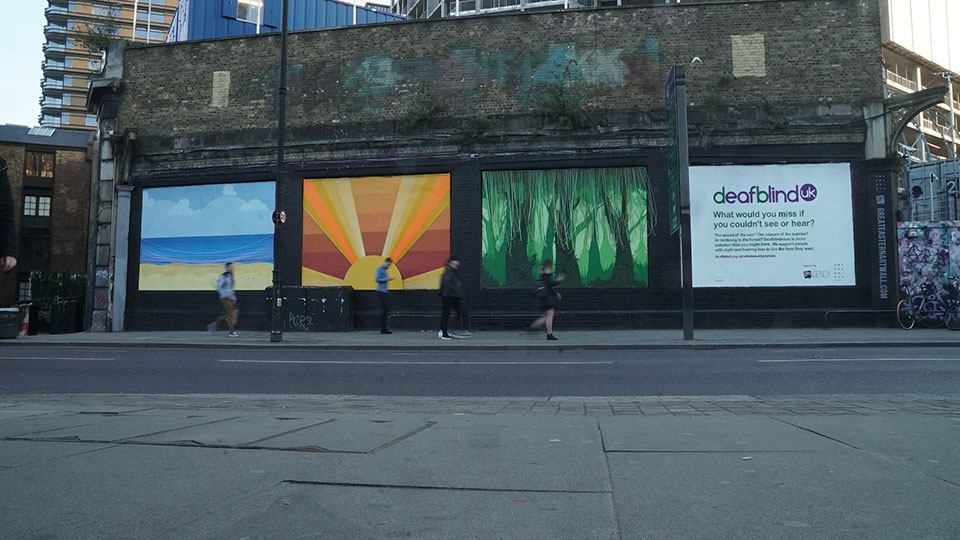 A multi-sensory mural in support of Deafblind UK has been unveiled on Great Eastern Street in Shoreditch, London.
The mural, which will remain until 7 June, is called What would you miss?It represents three scenes that people who are deafblind have said they miss the most: the sound of waves on a beach, the colours of a sunrise, and the sights and sounds of a woodland walk.

Each scene has been created using tactile materials, such as string, to ensure it is accessible to a deafblind audience.

CEO of Deafblind UK, Steve Conway, said: “This mural is rare in that those with sensory impairments can enjoy it as much as those with sight and hearing – something there is not enough of in today’s world. It also gives a powerful message to those who don’t know about or haven’t considered the effects of sight and hearing loss.”

The mural marks the start of Deafblind UK’s What would you miss?campaign, which encourages people to think about the implications of sight and hearing loss and how it would affect them.

The charity has worked with advertising agency Global Street Art, artist Perspicere and housing development project The Stage to develop the mural.

CEO and co-founder of Global Street Art, Lee Bofkin, said: “Working with Deafblind UK has been a brilliant experience for us and has really pushed our concept of what a mural is and who it is for. We’re really happy to have been able to include a much broader audience in who can appreciate this mural. We’re proud to support the great work Deafblind does.”

The best way to learn is live, in person, cooking, feeling, smelling and tasting, but TV is the second-best thing to that; it’s a halfway facsimile.