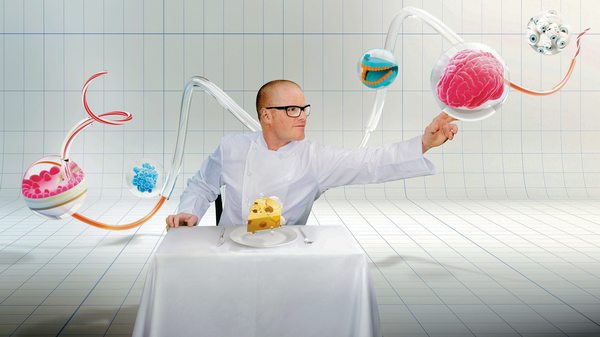 The exclusive meals prepared by Blumenthal in India featured some of the signature dishes from The Fat Duck menu.

The last time Heston Blumenthal was in India—six years ago—to shoot for a TV show, he was exploring red chillies at a spice market in Delhi. The man who put molecular gastronomy on the culinary map returned to the country last month—this time, to cook.

Blumenthal, often described as “mad scientist” for his experiments with liquid nitrogen in the kitchen, is not your ordinary chef. MasterChef Australia fans will remember him for some of the most bizarre dishes (remember the egg that was not an egg in season 8?), and for being the perfectionist that he is. A self-trained chef who has three Michelin stars for his restaurant The Fat Duck in the UK, Blumenthal was in India as part of the Masters of Marriott programme by Marriott International to curate meal experiences in Mumbai and Delhi.The two sold-out dinners featured some of his signature dishes, such as roasted scallops, macerated strawberries, cauliflower risotto and lamb scotch egg inspired by the Indian classic Nargisi kebab. Edited excerpts from an interview:

What are your thoughts on chefs in India and around the world going back to their roots to find inspiration for very modern dishes?

The problem with modern ideas in food is that most are unaware that creating a dish is a laborious process. Today, cooking, and even becoming a chef, has become the new rock ‘n’ roll. The impact of shows like MasterChef is that those who wish to become chefs want to get there fast. Not many will ask why it takes years to become a sushi chef. You really need the time and focus to build a connection with the ingredients or the concept. The risk is that modern cooking is confused with smoke and mirrors. You should be able to explain why you are using dry ice or liquid nitrogen. If you are using it to produce some smoke on the table, fine. But what value does it add to the dish? Cooking is a craft and there is no substitute for spending time on your craft.

You have pushed the boundaries of form and flavour with the dishes you have created. How do you conceptualize them?

My biggest focus over the past few years has been to personalize. I think it’s the most ambitious thing I have ever done because it is extremely challenging. For, my memories of food may not be the same as yours and it is a complicated process that has taken me four years to build.

How did you come up with the concept of multi-sensory cooking?

One of my earliest memories of food is of a meal we ate as a family in France. I was 16 and my father had taken us to a Michelin-starred restaurant in Provence. The memory is so vivid that I can still remember the balmy day, the sound of the meat being carved on the table, people clinking their glasses, and even the crunch of the staff’s feet on the gravel. It almost felt like I was in a multi-sensory rabbit hole. I believe food is all about playing with your emotions as it involves all the senses. And the future of food will be all about bringing emotions on the plate.

At a time when chefs and brands are trying to make food sustainable, how do you think luxury dining can do its bit?

I think it can contribute to the movement by making diners aware that they should value their food. You should not go to a luxury restaurant just because it’s on your bucket list. The other problem is that we eat too much. I am not saying we should starve ourselves. But if we can start anticipating and valuing a mouthful, be grateful about the food we eat, things can change. When it comes to organic farming or protecting the environment, unfortunately the whole concept has in a way given brands the opportunity to manipulate the system. And the real issue is that the general public does not realize they are being taken for a ride. We need more transparency in food.

Do you think social media has affected our dining choices?

Without a shadow of a doubt, it has. Social media has in a way made us fearful of people’s reactions. It has not only made us conscious of what we order at a restaurant, but also led to a fear of being judged for our choices. What is far more damaging is the internal stress that is caused due to this kind of behaviour.

Where do you think molecular gastronomy stands today?

I have no idea. What molecular gastronomy was is not what the world began to believe it to be. The term was coined when a Hungarian physicist wanted to have a congress involving chefs and scientists to bounce off ideas on the science of cooking. It required a scientific name and, hence, molecular gastronomy. But it got completely misunderstood. It’s important to understand that when we cook, physics and chemistry happen; when we eat, biology happens; as we grow up, history happens; and when we form groups, culture happens.

Music is a fantastic peacekeeper of the world, it is integral to harmony, and it is a required fundamental of human emotion.