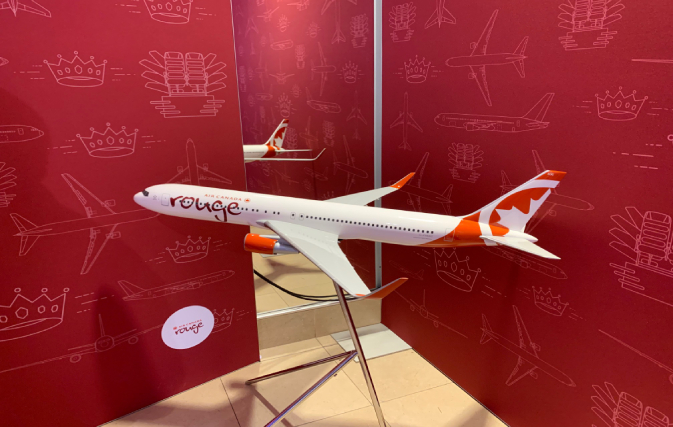 MONTREAL, May 24, 2019 /CNW Telbec/ – Air Canada Rouge will open an immersive and photo-ready pop-up on Friday, May 24 at the Toronto Eaton Centre to showcase its industry leading products through larger-than-life installations and multi-sensory rooms.

Visitors will be able to enjoy a range of experiences, including walking the ‘Rouge’ carpet in front of the cameras at their very own Hollywood movie premiere. They will also have a chance each day to win a pair of tickets to any one of the more than 70 destinations to which Air Canada Rouge flies around the world.

“The success of Air Canada Rouge over the past six years has been remarkable. We have continually enhanced our customer service since launching, including upgrades to our streaming in-flight entertainment system, installation of high-speed satellite internet, new onboard food options, including a partnership with Freshii, and an improved Premium Rouge cabin. To celebrate these achievements and our ongoing refinements we wanted through this pop-up to let people sample the fun customers on Air Canada Rouge experience during their holidays,” said Andrew Shibata, Managing Director of Brand at Air Canada.

From its first flight on Canada Day 2013, Air Canada Rouge has made the world easier to reach by opening some of the most desirable destinations to leisure travelers with non-stop flights from across Canada. It has grown to over 50 aircraft from four, flown over 30 million customers, and added over 40 new destinations to the Air Canada network, including routes not served by any other carriers. In addition, it offers customers industry leading amenities such as complimentary entertainment, participation in Air Canada’s loyalty program and, on transatlantic flights, complimentary checked baggage and meals. Most recently, Air Canada Rouge began offering new release movies on its streaming in-flight entertainment system, providing customers the latest Hollywood movies to add to the hundreds of hours of movies and TV programming already available, including HBO.

The Air Canada Rouge pop-up runs from Friday, May 24 to Sunday, June 2 at the Eaton Centre in Toronto.