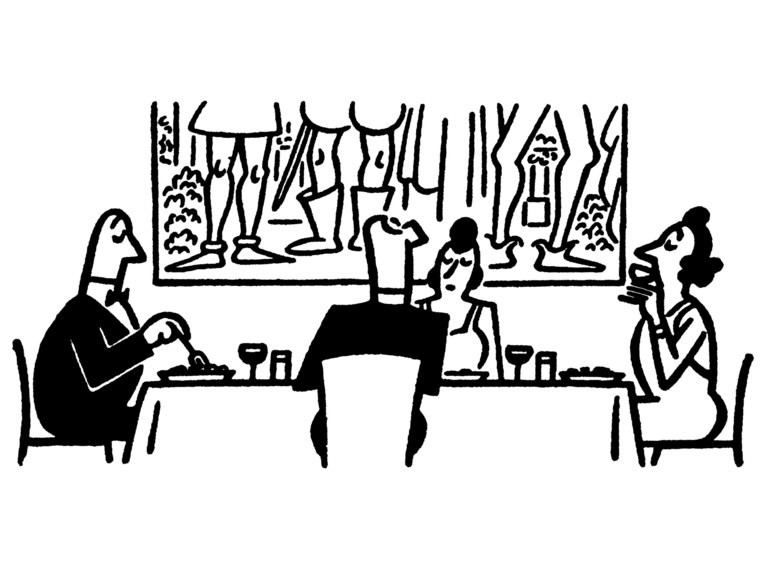 A Sensual Dinner for Renoir’s Nudes | The New Yorker

In 1944, the collector Robert Sterling Clark heard that the Art Institute of Chicago was looking to acquire “Seated Bather,” a late nude by Renoir. In a letter, Clark derided the picture as “a great big mushy gelatinous fat woman with a sad face strawberry tint, has no bones only fat.” Clark loved Renoir, but mostly his early paintings. As an heir to the Singer sewing-machine fortune, he was able to buy many of them. He eventually assembled one of the world’s greatest private collections, which later formed the core of the Clark Art Institute, in Williamstown, Massachusetts.

Last month, the institute’s curators travelled to the Explorers Club, in Manhattan, in order to give a sneak peek at some upcoming exhibitions to a few select “lovers of the Clark.” Among the offerings was the institute’s first-ever show of Renoir’s nudes, including the gelatinous one that had so offended the Clark’s founder.

After the presentation, the Clark lovers (mainly well-heeled donors) mingled on a terrace. At a podium, a man in black washed guests’ hands with rosewater in a basin filled with magnolia petals. “It’s a Biblical thing: you lay your hands on the flowers and then you pour over the water,” Olivier Meslay, the Clark’s director, said. “We’re trying to mix the idea of tradition and something more unexpected.”

The Explorers Club building was once the home of Clark’s brother Stephen (he founded the Baseball Hall of Fame), and the institute now maintains offices there. “Many of the pieces of stained glass”—the building has a hundred and fourteen leaded windows—“were sent over from Europe by Sterling Clark,” Michael Conforti, a former director of the institute, explained. “His brother probably didn’t know what they were!”

The exhibition is titled “Renoir: The Body, the Senses,” and Elena Siyanko, the Clark’s director of advancement initiatives, explained the genesis of the dinner portion of the evening. “I met this parfumier, Julian Bedel, who concocted the scents for this evening,” she said. “And with him, scent is all kind of about sex. So I thought, Let’s do a sensorial supper. It’s, like, full skin, sex.” Bedel, a shorn Patagonian, created a rose-heavy scent for the room, using only plants that Renoir painted. “It’s a depiction of how that landscape would smell,” he said.

A woman drifted through the crowd wearing a diadem of green hellebores on her head. She was Emma McCormick-Goodhart, an Anglo-American artist, who had, with Siyanko, arranged the party. “In scheming the dinner, I tried to conceptually inhabit the nude from without, across media—to treat vegetal and floral flesh as nudes, to extend the notion of what constitutes a nude at all,” she said.

In the dinner room, tables were paved with a layer of figs, moss, mushrooms, ranunculi, and onions, the work of the florist Bella Meyer, a granddaughter of Marc Chagall. “The plants offer themselves completely,” Meyer said. (Real mushrooms had apparently offered themselves to her to wear as earrings that evening.)

Amid the moss were plates of spring vegetables and ramps picked upstate by the chef Danny Newburg. “You have to forage on the table if you want to be fed,” Meslay said. For dessert, there was an abstract “edible portrait,” made up of mango, lychee, coconut, and raspberry macarons, set into a chocolate frame. An architect and pastry chef named Savinien Caracostea had based the dish on a short story by Edgar Allan Poe in which a young woman sits as a painter’s model for such a long time that she eventually withers and perishes. He called it “a nonlinear dessert experience.” The Clark lovers were given palette knives, and they devoured it with gusto.

Source: A Sensual Dinner for Renoir’s Nudes | The New Yorker