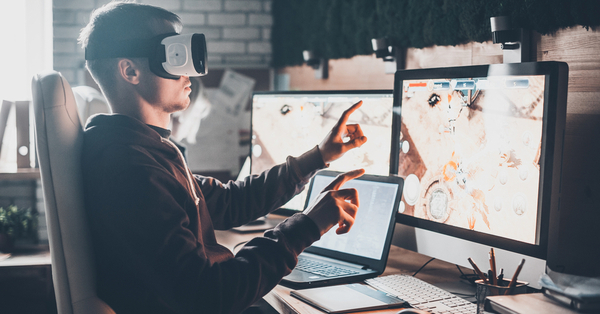 Virtual reality (VR) is poised to revolutionize the future of work – but is Gen Z equipped for VR skills? We discuss:

A recent Capgemini study that surveyed executives from more than 700 companies states that 53% of businesses predict that VR will become a mainstream technology in the next three years. If it does, it will require that the workforce develop a specific set of skills that lay the foundation of working with virtual reality.

With Generation Z entering the workforce in droves, we delve into how it can prepare for the future of work marked by the collaboration of storytelling with immersive technologies such as virtual reality, in conversation with Megan Elliott, Director of Johnny Carson Center for Emerging Media Arts at the University of Nebraska – Lincoln.

What Does the Future of Work for Gen Z Look Like?

Gen Z covers individuals of a broad age group, from 7 years to 22 years of age. So, the future of work for this generation is unpredictable and fast-evolving, making rapid upskilling vital. Elliott believes in preparing Gen Z for the future of work right from their college days.

Elliott tells us in an exclusive, “Our Bachelor of Fine Arts in Emerging Media Arts allows students to choose two of eight emphases from among Experience Design, Immersive+Interactive Media, Cinematic Arts, Story, Sensory Media, Virtual Production, Sonic Arts, and Data+Art. We are equipping our students with the skills they need to thrive in the 21st century,” Elliott comments.

And several trends suggest that these skills are shifting towards visual storytelling and immersive experiences:

To stay ahead of this evolution curve, students, educators, and corporate trainers must make VR part of their competency suite. This will help upcoming generations meet the needs of the future of work, ready to fill some of the skill gaps that have emerged in recent times.

To face the future of work with confidence, Gen Zers need a unique combination of hard and soft skills. “I always say we are looking for the ‘magicians, pirates, and the wizards.’ We’re looking for the students who just like to create – telling stories, making movies, building apps, creating video games, building robots, making music, whatever their passions are,” says Elliott. Let’s look at these skills and traits in closer detail.

VR professionals will work in a highly dynamic space, with new technologies entering the market every day, and expectations/opportunities changing accordingly.

For instance, Elliot tells us that the Carson Center is “recruiting students with radical imaginations who want to invent the future – not just in entertainment, but in architecture, precision agriculture, wearable technology, and more. We’ll prepare them to do so with the skills to harness disruptive forces like AI and data streaming.”

This will help to pick up new skills rapidly, without aiming for absolute perfection in VR projects. Employees who can fail fast and fail often are also less likely to become complacent with a specific VR or storytelling platform.

2. The ability to collaborate and lead a team (soft skill)

As VR technology matures, projects will become more collaborative, requiring involvement from multiple stakeholders. One can imagine the creation of collaborative platforms for VR, where highly specialized Gen Z employees come together to create the final VR product. To succeed in this future of work, Gen Zers need the ability to collaborate seamlessly.

Leadership will also be an essential skill, as the most innovative/disruptive professionals find themselves at the helm of game-changing VR projects. “We are looking for smart, creative leaders – the innovators and entrepreneurs of our world,” Elliott adds.

Imagination is the cornerstone of crafting immersive experiences, and this applies to VR as well. But being able to imagine an engaging environment isn’t enough – it should carry adequate fidelity to replicate the real world. To achieve this, and succeed in the future of work, Gen Z needs powerful observation skills, the ability to find patterns, storytelling skills, and an interest in linking the physical world to digital artifacts. Courses such as those offered by the Carson Center help in the development of such skills.

This is a basic hard skill that Gen Zers will require in the future. Just like math lays the foundation of STEM, 3D simulation will be a critical building block for VR projects.

Several tools out there can help young professionals and students get started with building 3D modeling skills immediately. For example, Second Life is a gamified virtual world where users can try their hand at basic 3D modeling. For more advanced learners and corporate trainers, Unity is a smarter choice, as it comes complete with resources and support services.

As VR technology evolves, it will become more user-friendly, delivering superior experiences to the audience. This means that VR will require compatibility with smartphones.

That’s why Gen Zers need advanced mobile-native development skills that can align the high-bandwidth, high-quality content of VR with a standard smartphone specification. Hardware skills will also prove valuable to the future of work, as Gen Zers who can optimize hardware form factors and battery life will be in high demand.

UX/UI designers have never been in more demand than right now. According to the Onward Search Digital, Creative and Marketing Professionals Salary Guide, UX design was 2019’s second-most searched for skill. And this trend is likely to continue as VR becomes central to the future of work. Gen Zers should be able to imagine a user’s journey for a compelling narrative around interactions, identify user problems to be addressed via design, and write code that can turn design concepts into reality.

“Our graduates will be fluent in story, design, entrepreneurship, and code – core creative capabilities that give students ownership over their futures and allow them to thrive in a fast-changing, diverse, global environment,” comments Elliott.

VR Will Be at the Heart of Tomorrow’s Workplace – Are Employers Ready?

As VR technology becomes more sophisticated and accessible, processes like training, collaboration, equipment maintenance, and marketing will be heavily impacted. For example, VR is already widely used for soft skills training in areas like manufacturing and hospitality.

It’s vital to start equipping the Gen Z for this new future of work from an early stage. The University of Nebraska has made significant strides in this direction. “The Johnny Carson Center for Emerging Media Arts recently became the first in the Big Ten to collaborate with Educause and HP in researching the possibilities of XR [extended reality] in higher education,” Elliott tells us.

With 2020 right around the corner, employers must revisit their skill requirements with an eye on a VR-led future. The six skills listed above will be critical for the future workforce, shaping Gen Zers’ performance trajectory as well as the company’s growth path.