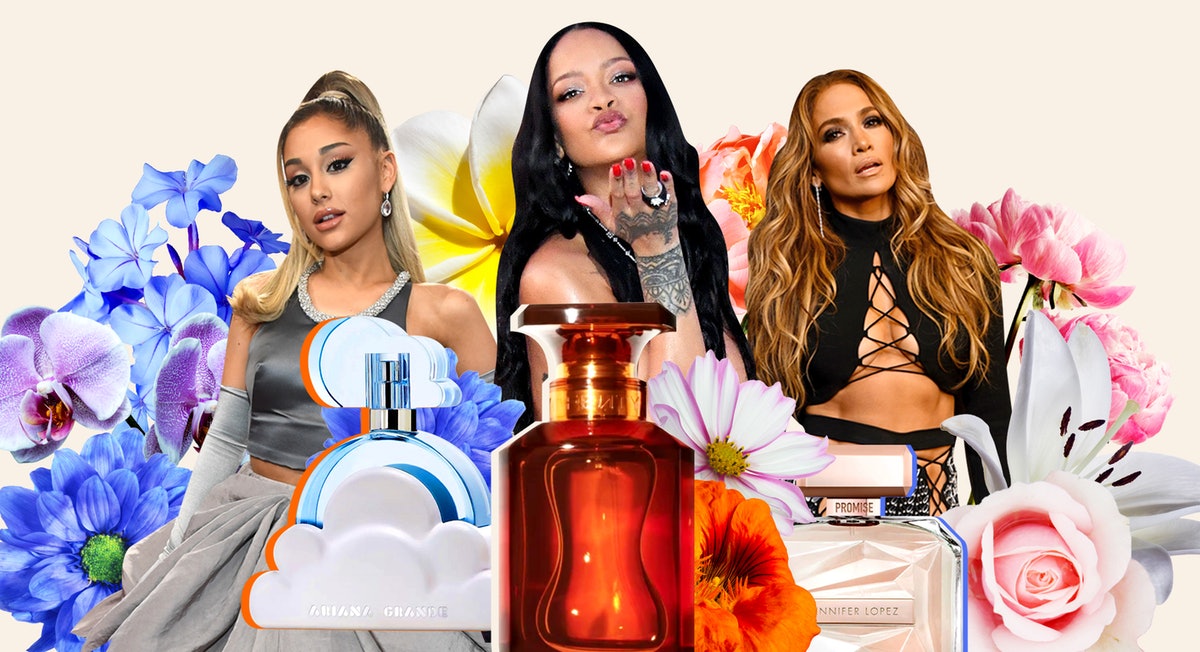 Why Are We So Obsessed With Celebrity Scents? | Bustle

“And so you want me to tell you what a woman is supposed to smell like? However the fuck they wanna feel.”

Shared across social (along with an IGTV mashup of a bevy of celebs commenting on how damn good Rihanna smells), the classic-yet-irreverent ad positioned Fenty Eau De Parfum as something of an essence of Riri: A single spray and you, too, could stop giving a fuck — while still looking impossibly sexy, of course.

Celebrity perfumes are one of pop culture’s more fascinating contradictions. For most, selecting a signature scent is a very individualized endeavor, and one that becomes even more personal once that scent becomes synonymous with day-to-day style and experience. Our olfactory centers are the most closely tied to memory, with odors taking a direct route to the limbic system, including the amygdala and the hippocampus, the regions related to emotion and memory. In short, what we smell becomes very closely linked our perception of ourselves and the world around us — both past and present.

So why would you choose to smell like someone else?

The answer, at first spritz, is a simple as idolization; a want of even just a mist of what makes a particular celebrity so special. (The same can, of course, be said of designer perfumes.) The first celebrity scent came courtesy of the indominable Sophia Loren in 1981. Sophia was launched by Coty, with accompanying ads promising magnificence and constant reinvention. Next came Cher’s Uninhibited — launched in 1987 with Parfums Stern, developed by nose Francis Bocris, and featuring top notes of bergamot and orange — followed by the first celebrity fragrance series, that courtesy of Elizabeth Taylor. The actor’s Passion, White Diamonds, Black Pearls saturated the early ’90s with super-sweet scents and high-drama commercials (if you need a dose of camp, watch one and call us in the morning).

Since then, the 21st century has been marked by an onslaught of celeb fragrances, the trend beginning in earnest with Glow by Jennifer Lopez. Also the work of Coty, Glow’s 2002 release spurred a new era for the industry, and 18 separate scents for J. Lo alone. At this point, many an iconic woman (plus Justin Bieber) has been transformed into something of a genie in a bottle, (Christina Aguilera has 11 scents, since you asked), each icon’s essence contained in perfumes designed to embody that thing that makes them so singularly special. Think Heat by Beyoncé, Curious by Britney Spears, Lovely by Sarah Jessica Parker, Wonderstruck by Taylor Swift, Cloud by Ariana Grande, Fame by Lady Gaga… the list goes on and on.

And with the recent revival of ’90s and Y2K-minded notes, celebrity perfumes are coming back in a big way.

“With the advent of social media, celebrities are speaking directly to their consumers; they’re developing and selling their fragrances while simultaneously talking to their fan base — they’re able to reach them in a different way,” says Givaudan perfumer Nicole Mancini, the nose behind Kim Kardashian West’s line of KKW fragrances. “We are seeing them dive into the process, taking ownership, and being part of the whole creation from start-to-finish.”

It’s that personalization that makes the celeb-driven scent so appealing. While a designer fragrance may evoke the sensibilities of that brand, there’s just something about a recognizable human face that infuses perfume with enough personality to capture the collective. This is likely why designers employ celebrities as ambassadors to their perfumes, even if the scent isn’t actually based on that celebrity’s scent sensibilities. Would YSL Beauty’s Black Opium, for example, be as appealing sans Zoë Kravitz’s pixie and sultry smokey eye, or her assertion that the scent is sensual, in turn? Conversely, are you more likely to reach for Estée Lauder’s Modern Muse Le Rouge, for which Kendall Jenner was the original face, or a perfume crafted by Jenner herself?

“When talking about working with celebrities vs. a designer perfumer, there’s often an intimacy in working directly with the creator versus a larger designer house,” explains Mancini, who worked with Jenner to develop a collection three Kendall Jenner by KKW fragrances. “There are several celebrity brands that have now adopted a direct-to-consumer model, forgoing licensing and taking complete creative ownership. I frequently get to work directly with the celebrity client, quickly recognize their tastes, and identify their likes and dislikes.”

For Jenner, those “likes” are all down to nature, resulting in a trio of scents (Olive, Amber, and Roan) inspired by the outdoors and horseback riding. As with Rihanna’s Fenty, the bottles and hues are pleasingly pared-down compared to the more opulent offerings of the early-to-mid-aughts, communicating a certain sense of insouciance that many are after — cool, and memorably scented, all without trying too hard. Also similar was the campaign, comprised of Instagram shares that found Jenner and KKW posing with alongside black Friesian horses, their own mane styled to match. Jenner was also sure to share some BTS of the shoot along with her initial announcement, lending the entire ad an air of authenticity.

“I think part of what makes these scents relevant is that they’re approaching it in a way that’s true to their taste and representative of themselves — they have a unique point of view and that’s why people want to follow them,” says Mancini. “Of course they want their fragrances to be successful, but they also want to have something that’s authentic to who they are. Plus, they know what works for them and their audience.”

The visibility (and accessibility) that comes with social defines the new guard of celebrity fragrances — rather than fantasy-inducing and faraway, these perfumes are tangible, affordable infusions of It-girl, bottled for your use. Fenty isn’t inspired by Rihanna’s fame, it’s a pitched product of her personality. Kendall Jenner by KKW isn’t an ode to wealth or success, instead encompassing the model’s passions beyond the world of wealth. It’s more about who they are, and less about what they do.

But, though the present-tense of celebrity fragrance may skew more chic and genuine than past iterations, the general takeaway remains true: If you’re going to smell like someone else, it might as well be someone who has something that you want.

Source: Why Are We So Obsessed With Celebrity Scents?