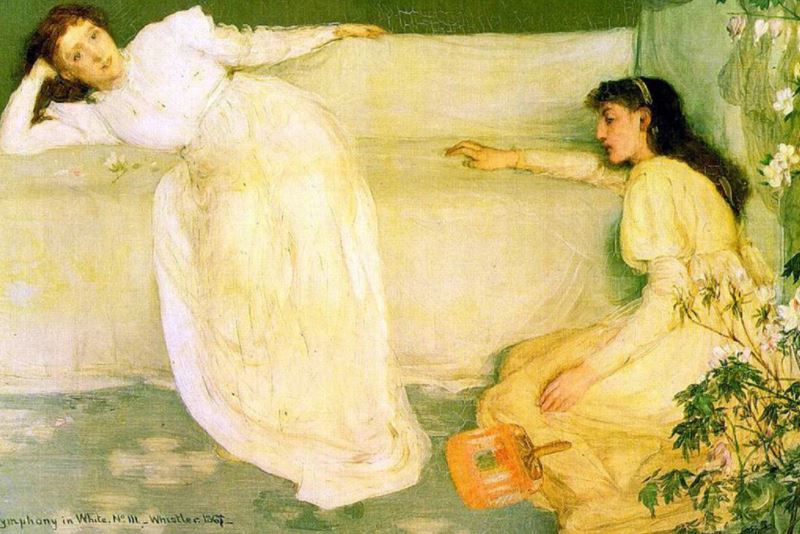 There’s only one way to begin a piece on paintings inspired by music – with a famous line by the Victorian aesthete, Walter Pater. In an essay of 1873, Pater wrote: “All art constantly aspires towards the condition of music.”

It’s an idea that took on added significance with the development of abstract painting, particularly the work of Wassily Kandinsky (1866-1944), a trained musician who experienced the condition called synaesthesia (literally “joined perception”), which allowed him to see colours when listening to music. For some reason the Russians were especially prone to synaesthesia – composers, Rimsky-Korsakov and Scriabin had the same tendencies.

For the titles of his paintings Kandinsky often used musical terminology. In 1909 he created an experimental theatre piece called The Yellow Sound, although it would not be performed until 1972. He also enjoyed a long, lively correspondence with the composer, Arnold Schoenberg, who aspired to be a painter.

Once again, I’m biting off a forbiddingly unchewable topic. To make matters easier I’m not going to speak about music inspired by paintings, although that might be a subject for another day. Neither am I going to discuss artists’ set designs for operas. Finally, I’m not including portraits of composers and musicians, or pictures of people listening to music. By limiting the discussion to painting, I’m taking out contemporary video works by artists such as Anri Sala, Pipilotti Rist or Angelica Mesiti.

This eliminates a few million options but there are plenty more. Plato argued that music was the most perfect of the arts because it seemed to have the power of cutting through the senses and reaching the inmost soul. This idea found support at the dawn of the Romantic era from thinkers such as Goethe, Schopenhauer, and E.T.A. Hoffmann, who championed “absolute music”, which spoke directly to the emotions and the spirit, as opposed to “program music”, which drew upon stories and images.

It wasn’t a simple dichotomy because Beethoven, the supreme hero of the Romantics, had always worked from stories, even if he rarely revealed his sources. The composer was hugely surprised to read a review of his Fifth Symphony in 1810, in which Hoffmann claimed him as an apostle of the Absolute.

“Beethoven’s music moves the lever controlling horror, fear, dread, pain,” Hoffmann wrote, “and awakens the infinite longing that is the essence of Romanticism.” This was news to Beethoven, but it made a nice change from critics complaining he was trying too hard to be original.

Ironically, his next symphony, the Pastoral, would have five movements, each given a programmatic title, beginning with: “Awakening of cheerful feelings on arrival in the countryside.”

There was no “absolute” painting for Romantic artists such as Delacroix or Turner, who saw themselves as visual storytellers. When Turner veered close to abstraction in his late works of the 1840s, it was thought he had fallen into decline and madness. The critic, William Hazlitt, had already complained, as early as 1816, that Turner’s works were “pictures of nothing, and very like”.

Turner had a keen appreciation of music but as far as I know, did not paint anything based on an identifiable musical composition. There are, however, parallels with Beethoven in the way he felt compelled to push his chosen medium towards the absolute in opposition to the conventions of the time.

Lacking the visual language of abstraction, 19th century artists expressed their love of music in programmatic terms – in atmospheric landscapes and seascapes, images of people listening to concerts, or portraits of musicians.

One musical enthusiast was Henri Fantin-Latour, known today for his flower paintings. A fan of Robert Schumann, and a dedicated Wagnerian, Fantin-Latour produced fantasies based on the music he loved. His Rhine maidens, after Wagner’s opera, Das Rheingold, float through water and light in a way that could not have been reproduced on the Paris stage. For Fantin-Latour these musically inspired works were far more important than the flower studies that paid his bills.

His Rhine maidens, after Wagner’s opera, float through water and light in a way that could not have been reproduced on the Paris stage.

Fantin-Latour’s musical paintings draw him into the territory inhabited by the Symbolists, who reacted against the sensory fixations of the Impressionists with a demand for an art of ideas. The problem was that figuration was Fantin-Latour’s only vehicle for conveying musical ideas. Some might say the same applies to Wagner, whose music was saturated with “literary” associations.

The most extreme example of a symbolist response to a piece of music is The Beethoven Frieze by Gustav Klimt, made for the Vienna Secession exhibition of 1902 that showcased Max Klinger’s statue of the revered composer.

Klimt’s response to Beethoven’s Ninth Symphony is frankly bizarre: floating genii, suffering humanity, snake-haired gorgons, a knight in shining armour, embracing lovers, and a giant gorilla intended to represent the mythical monster, Typhoeus, but irresistibly reminiscent of King Kong. The connections with Beethoven are not exactly obvious, but as an imaginative artistic response to a stirring piece of music, it’s unbeatable.

The connections with Beethoven are not exactly obvious, but as an imaginative response to a stirring piece of music, it’s unbeatable.

James Abbott McNeill Whistler had taken a more subdued approach with his wistful, moody Nocturnes of the 1870s. The artist orginally called these dimly lit views of the Thames “moonlights” but adopted the suggestion of a friend who was reminded of Chopin’s Nocturnes. As the most prominent representative of the Aesthetic movement, Whistler was already in the habit of giving his paintings musical titles. Three of his best-known portraits, featuring languid young women in flowing white dresses, are called Symphony in White (1862-67).

One finds a transition point between programmatic and absolute responses to music in Luigi Russolo’s Futurist painting, La Musica (a pianist playing for his audience) (1911-12). A shadowy pianist with more arms than a Hindu deity, is unleashing a long, curving serpent of sound that touches the red, yellow and green faces of listeners, arranged in concentric rows.

Russolo, who would become known for his performances of Futurist music, and a 1913 manifesto, The Art of Noise, has one foot in the past, one in the future. The pianist is solid enough, but the faces are masks and the music itself an abstract design.

By now Kandinsky had opened the door to so-called pure abstraction. Georges Braque went half-way there in two Cubist paintings: Hommage à Bach (1911-12) and Aria de Bach (1913). Braque was an accomplished violinist who loved music no less than painting, and Bach was his idol. He saw the angles and planes of the Cubist canvas as a good match for the geometric rigor of the composer of The Art of Fugue and The Well-Tempered Clavier.

Another artist-musician was Paul Klee (1879-1940), who had played violin in the Berne Municipal Orchestra. Music was never far from Klee’s thoughts and paintings. One of his more obvious forays is In the Style of Bach (1919), in which each motif on the canvas is treated as a musical notation, and the overall picture as a kind of score.

It could be argued that the logical nature of Bach’s music is reflected in the cerebral methods of Braque and Klee, but with the Surrealists, logic went out the window. Dorothea Tanning’s Eine Kleine Nachtmusik (1943) shows two girls standing at the top of a staircase in what looks like a dilapidated hotel. A massive sunflower lies on the landing in front of them. It’s anybody’s guess what this has to do with Mozart’s famously cheerful serenade, although “night music” suggests a vision from the painter’s dreams.

During the 20th century artists became increasingly enamoured with jazz, leading to works such as Arthur Dove’s 1927 variations on Gershwin’s jazz-influenced Rhapsody in Blue; Mondrian’s Broadway Boogie-Woogie (1943); and the dancing, rhythmic canvases of the Abstract Expressionists. Willem De Kooning claimed that he “bent” the paint in the same way Miles Davis bent the notes in a piece of music.

As abstract art became the acceptable face of the avant-garde in the 1960s paintings were frequently described in musical terms, yet the distaste for “program” music felt by so many composers was echoed by artists’ rejection of figuration. What seemed almost inconceivable to Beethoven or Turner had come to pass. The Absolute was the new orthodoxy, with any hint of narrative or recognisable imagery viewed as a throwback to the past. The destiny of both music and art was abstract – or so it was believed.

This changed when modernist art ground to a halt in the late 1970s and composers grew bored with the aridity of atonal music. Imagery, narrative, rhythm and melody came flooding back. In reality these things had never gone away, they had simply slipped out of the limelight. The ties between art and music remained as strong as ever, with just as many composers inspired by paintings, and painters with a passion for music.

That relationship continues in abstract works such as Messiaen (2013) by Australian artist Aida Tomescu. We’re invited to find intimations of Messiaen’s music in the vigorous swirls of paint and the fidgety notations scraped out with the end of a brush. Tomescu doesn’t nominate a specific composition, but I’d be willing to bet it was the Quartet for the End of Time (1941). Would I be thinking of this had the painting been left untitled? No, but it’s wondrous how a single name or word can set off an entire chain of connections, like a string of fireworks. It testifies to the ideas that lie latent in the meeting of a painting and a piece of music, waiting only for the viewer to provide the spark.

Source: What’s King Kong got to do with Beethoven’s Ninth Symphony?