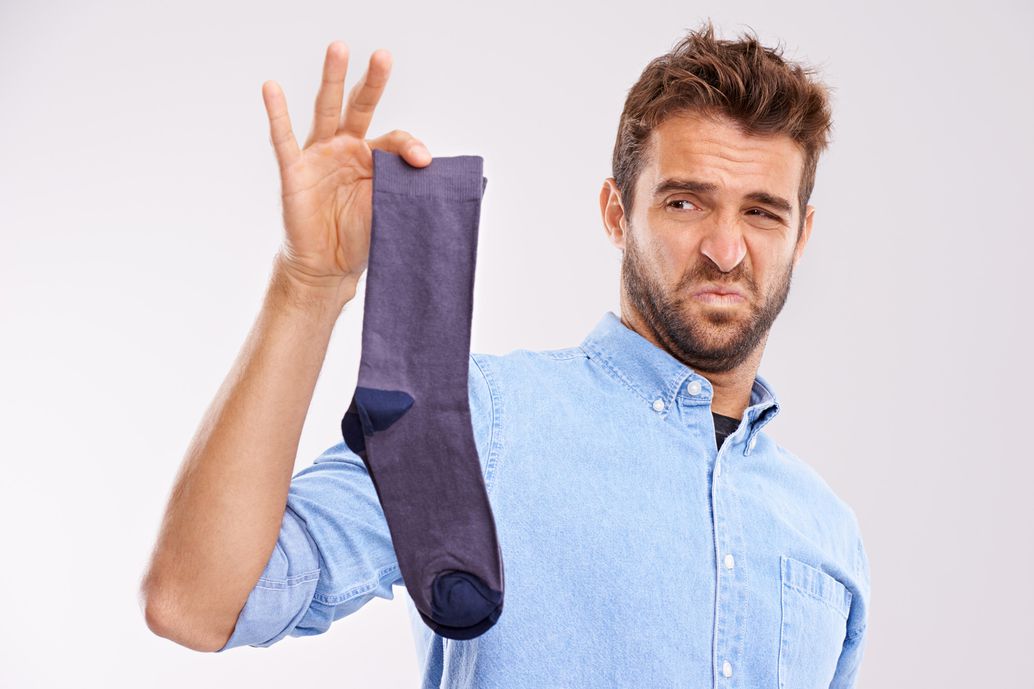 Your dog’s favorite spot on the couch reeks. Your kitchen smells like eau de old cooking oil. And your favorite sneakers generate their own stench near the front door.

Thanks to natural processes that push stinky molecules into the air and up your nose, nasty odors can strike at any time. But what really makes things smell, anyway? The answer is more complicated than you might think—but the solution is surprisingly simple.

The science of smelling something “gross “

Is a smell a perception or a thing? The science behind bad odors presents a chicken-or-egg dilemma from the outset thanks to the complex dance between potentially bad smells, also known as malodors, your nose, and your brain. As it turns out, says Steve Horenziak, Principal Scientist for Febreze and an air care formulator who has spent years studying the chemistry of malodor, stinky smells are a matter of chemistry, evolution, and perception.

At its core, what you smell is neither good nor bad. It’s just information. “We have evolved to smell things because that information is useful to us,” Horenziak says. Organisms like flowers that must attract pollinators to reproduce evolved to put attractive chemical messages—interpreted as scent—into the air. And the insects and birds that rely on them for food evolved to pick up on those scents. Humans aren’t exempt, either, says Horenziak: “Over time, we’ve determined that smells constitute useful information.”

On a physical level, an odor starts with a gaseous molecule that can be carried by air. As soon as the molecule is breathed in, a complex perceptual process begins. Inside your nose, the molecules are absorbed through the mucous membrane that lines your nasal cavities. The membrane contains a layer of fluid and millions of olfactory receptors, special neurons with hair-like cilia that respond to the molecules and send information about them to our brain.

How your nose knows

It’s not enough to smell something; your brain then has to process it and help you distinguish between, say, burnt toast and fresh-baked cookies. To do so, your gray matter relies on the power of association. “Your sense of smell is connected to the part of the brain that has emotional memory,” explains Febreze Scientific Communications Director and self-proclaimed “queen of stink” Mary Johnson.

Some smells are universally reviled because they have to do with survival—think about your nose’s natural revulsion when it inhales the stench of garbage or rotten food, which could put your health in danger. However, says Horenziak, “You’re not really born liking or disliking any odor, with some exceptions, like those associated with waste and decay – which are nearly universally disliked smells.” One person’s beloved smell can provoke disgust in someone else, and vice-versa, based largely on habituation and cultural norms. For example, the odor of a strong-smelling food could remind one sniffer of family and home—and repulse another who has never encountered it.

Most odors are actually combinations of odors, and elements that smell good in one scent can be perceived as a revolting malodor in the right context. For example, isovaleric acid—a compound reminiscent of stinky feet or barf—can make you feel queasy if you are looking at something visually unpalatable. But if its scent wafts into your nostrils as a server grates fresh Parmesan cheese over an appetizing plate of pasta at an Italian restaurant, you may react quite differently. (Or not: In one 2016 study, French scientists used fMRI scans to visualize cheese-haters’ reactions to images of strong-smelling cheese; the group was able to trigger disgust reactions and activity in brain regions associated with aversion.)

Though dose does matter in some cases (like the onslaught of stench from a gym bag in which your sweaty clothes have taken an hours-long bacteria bath), humans have evolved to sense very tiny amounts of odor molecules. “Some molecules are really, really potent,” says Horenziak, including those that contain sulfur, the element that gives rotten eggs their funk.

The negative impacts of bad odors

Bad odors don’t just make life a little less pleasant: It can trigger everything from headache to nausea. In recent research published in the journal Atmosphere, Horenziak and other scientists found indoor malodor can go beyond annoyance and impact people in psychological, physical, social, and even economic contexts.

“If your home has an unpleasant odor, it could be worth less, which causes you economic harm,” says Johnson. “People may be less likely to socialize with you. You could feel a loss of control. Many odors are not just a nuisance.”

A donut-shaped molecule in Febreze that’s derived from starch traps odor molecules in its center.

How to stop the stink

The science of stink is complex—but Horenziak and his colleagues at P&G have spent years developing a solution. Febreze contains cyclodextrin, a donut-shaped molecule derived from starch and found in things like summer sweet corn and potatoes, that traps odor molecules in its center, locking them away for good. The odor-trapping action is enhanced by duo PSB, a corkscrew-shaped molecule that locks stink in its spiral shape, and sodium citrate, an odor neutralizer that balances odors’ pH. Febreze’s water-based formula also features a completely natural propellant, which uses nitrogen—a natural part of the air we breathe–instead of common VOC propellants like butane and propane.

Some versions of Febreze also contain perfumes that are carefully balanced by P&G’s expert perfumers to leave behind the pleasant scent of anything from bamboo to lavender. And for those who want to just experience the sweet smell of no smell at all, there’s Febreze FABRIC Free, which is free of fragrance.

“A lot of science goes into this seemingly effortless way to help manage odors in your home,” says Johnson. “We’re very, very passionate about what we do.”

Next time malodor strikes, thank your nose and brain for working together to gross you out. Then strike back—and go about your funk-free business.