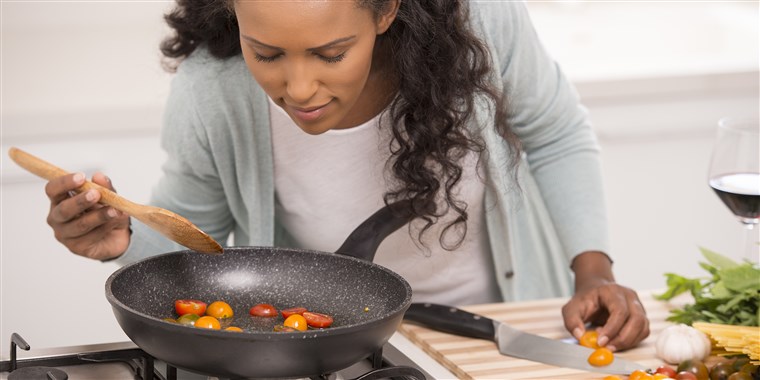 My partner-in-quarantine and I were preparing a Bolognese sauce. He put the aromatics in the pan to sauté — but they weren’t aromatic. I stuck my face way too close to the sputtering garlic and onion pieces and detected … nothing. It was the strangest thing: I knew, from memory, how it was supposed to smell, but I couldn’t get my nose to grasp it.

We made the rest of the sauce, adding beef, butter, tomatoes and so on. Still, nothing.

“Let’s add fish sauce!” I suggested, like I always do. (Fish sauce makes everything better.) I opened the bottle, gave it a whiff — like, a proper, full-extent-of-my-lungs inhale, and … zilch.

Desperate for some kind of sensation, I shoveled a spoonful of the sauce into my mouth. I could feel its hot temperature, chunky texture and overall saltiness but, according to my taste buds, it could have been oatmeal.

I texted my family group chat to report this innocuous-yet-disorienting symptom (my mom, dad and brother are all doctors) and my dad, who specializes in infectious disease, sent back a New York Times article reporting that British ear, nose and throat doctors were asking adults who are experiencing a loss of smell (anosmia) and an accompanying loss of taste (dysgeusia) to self-isolate for seven days.

According to this report, 30% of positive cases of COVID-19 in South Korea, where testing is widespread, showed this symptom; and in Germany, nearly 70% of its confirmed cases experience it.

Dr. James C. Denneny III, CEO of the American Academy of Otolaryngology, head and neck surgery (AAO-HNS), told me over email that anosmia is caused by the viral illness damaging the receptor fibers of the olfactory nerve responsible for smell and influencing taste.

But because I’m not exhibiting severe symptoms (just a low-grade fever and some achiness), I’m not going to get tested. I’m just going to operate under the assumption I have it, quarantining in my apartment for the near future. I feel very lucky because, compared to the lethalness of the virus, my symptoms are very mild. Given that people are dying and losing their jobs because of this pandemic, I know that my inability to discern wine from vinegar isn’t a huge deal.

COVID-19-related ansomnia is, for the most part, believed to be temporary.

“Current reports have indicated as few as three to five days, up to several weeks after recovery for those patients who do get recovery of their smell,” said Denneny. But, he added, “There are those who do not recover and are left with a permanent alteration of smell and possibly taste.”

(For my own sanity, I’m just going to pretend he didn’t say that last bit.)

Though my symptoms are far from debilitating, it does feel particularly ruthless — when I’m already deprived of in-person interaction and the outdoors in general — to also lose the thing that was bringing me the most joy: tasting food.

Aside from writing about food for a living (I’m a food writer and editor), I enjoy cooking on a daily basis. Like so many people around the world right now stocking up on non-perishables, learning to bake bread or taking virtual cooking lessons, I turn to food for refuge. I can still cook, yes, but the joy of breathing in the fumes, tasting and altering it as I go, and then finally sitting down to savor it, is gone. I try to close my eyes and imagine how it tastes, which helps a little, but ultimately, I could just as well be eating cardboard.

My friend Justin lost his senses of smell and taste last Thursday. “I was drinking coffee, maybe my third cup, and it stopped tasting like anything,” he told me. “Then I started to feel a bit achy, like I had a head cold.”

Another friend of mine, Rachel, had a similar experience on Thursday — but she was eating noodles when she realized it. “It’s weird because there’s no congestion trigger to make you understand why,” she said. “I was eating peanut butter noodles and realized I could be eating spaghetti Bolognese and wouldn’t notice the difference. You can differentiate between cold and hot and consistency but nothing else.”

They both agreed that it completely took the enjoyment out of eating and drinking, which was also what was bringing them the most joy during isolation.

“It transitioned from eating to satisfy my cravings to eating to fulfill my hunger,” Rachel told me. “It didn’t matter what I ate anymore.”

Thankfully, Justin and Rachel have both started to regain their senses of smell and taste as of Wednesday. Justin ate an orange and excitedly texted me to report he could taste it. Rachel took a bite of the cereal and bananas she’d been eating for the past week and could finally discern flavors.

It’s been about five days for me, so I’m hoping it returns soon. In the meantime, though, I’ve been trying to excite my taste buds back into function with by adding spice to everything: soup with all the chile oil, ginger tea with plenty of hot honey and pasta with a heavy sprinkle of crushed red pepper. It’s comforting to know I can still feel the heat.

I’m also placing a lot more value in texture, adding an excessive amount of peanuts to my morning oatmeal, just so I can know I’m not eating some bland, homogenous mixture.

As far as medical advice, Denneny said, “People who have altered smell are at particular risk for not being able to recognize the odor of smoke from fire, gas leaks, toxic chemicals, spoiled food and other unsanitary conditions.

“If there is any question as to whether the food is spoiled, the individual with the altered smell and taste should ask a family member or friend for help.”

So, all I can do right now is be patient and hope what I’m eating isn’t spoiled (my partner-in-quarantine also can’t smell or taste so he’s no help there). But I’ll continue daydreaming about the first meal I’ll have when (not if!) I can taste again: that Bolognese we were cooking — we stashed it in the freezer.

Source: What it’s like to lose your senses of smell and taste