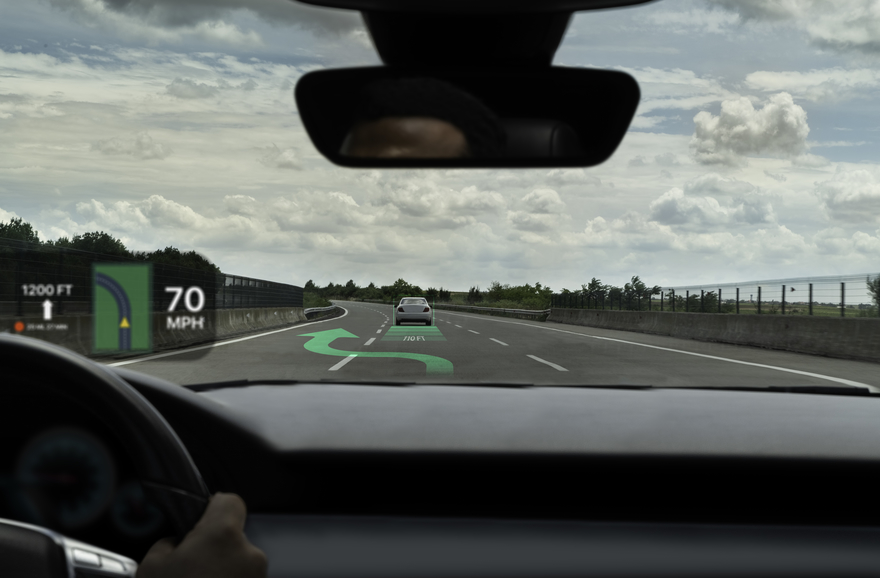 By msensory team18/12/2020No Comments
Augmented reality heads-up displays in vehicles can improve situational awareness by locating in a driver’s line of vision graphics that interact with and augment objects in the real world.(sefa ozel/iStock/Getty Images Plus)
ShareFacebookTwitterLinkedInEmailPrint

When you hear the term “augmented reality” or AR, what comes to mind? Nope, we’re not talking about the alternate universe we’re all living in due to the COVID-19 pandemic. While you might not refer to it as “augmented reality,” if you use social media or virtually “tried on” an article of clothing before purchasing it online, then you likely have a good grasp of the concept.

So what is augmented reality?

Augmented reality is the practice by which technology is used to overlay images, text or sounds onto the physical world around us. In social media applications, you might be poised to take a selfie and choose to enhance an image of yourself by applying a virtual flower crown or puppy dog ears and a snout. While on a walk outside, you might have taken a photo of the beautiful fall colors, and before posting it to your feed or story, you added sound effects, icons or graphics, and a comment or two for emphasis. These are basic examples of augmented reality at play.

The anticipation of Apple Glass

Perhaps one of the most anticipated AR product debuts is Apple Glass, the technology company’s wearable, AR-enabled eyeglasses with a projected retail price starting at $499. The release date is anyone’s guess, but some believe an announcement could take place in March 2021. The glasses are thought to take AR to the next level by bringing the functionality of our iPhones to the lenses, similar to how iPhones interact with and incorporating AR in a multitude of everyday activities and interactions with the world around us.

A touch of history

AR was first introduced by Associate Professor of Electrical Engineering at Harvard University, Ivan Sutherland, and Bob Sproull, one of his students, in 1968. The duo invented the Sword of Damocles, regarded as the “first virtual reality and augmented reality head-mounted display system.”

Today, there is a vast number of useful and entertaining applications for augmented reality across numerous areas and industries.

Consumer Products: Picking out eyeglasses online sounds risky, right? Augmented reality can reduce or eliminate the guesswork by superimposing eyeglass styles on the face of a potential customer. In essence, consumers can try before they buy, and brands (from clothing to furniture and beyond) can potentially increase their revenue and gain loyal customers through the use of AR. QR codes are another common application for augmented reality. A QR code on a product or display in a store can provide customers with additional information about the item or service. At a restaurant, we’re increasingly familiar with QR codes on laminated placards that direct us to menus on our smartphones, thus reducing paper waste, printing costs, and the spread of germs.

Cultural Institutions & Tourism: Speaking of QR codes, museums and historic sites employ these machine-readable barcodes to provide additional information to guests that wish to go beyond what a small placard might have the space to convey. Augmented reality can superimpose factually recreated images or scenes over historical sites to show guests what they might have looked like “back in the day.”

Entertainment: While AR in video games hasn’t been around as long as virtual reality in this space, it has made its mark. In 2000, AR Quake introduced the first augmented reality game, and in 2016, Niantic and Nintendo released Pokémon Go, the “hugely popular location-based AR game that put AR on the mainstream map.” In 2012, a hologram of the late Tupac Shakur performed with Snoop Dogg and Dr. Dre at a Coachella Festival performance through the science of AR and holography.

Healthcare: Students and practitioners can learn complex techniques and procedures through the use of AR technology, which might allow them to visualize the intricacies of organs and systems or the steps in surgery.

Manufacturing: AR in manufacturing settings can provide employees with crucial information they need to do their jobs, such as overlaying temperature, statistics and safety information over a product, equipment or machinery.

Military: Heads-up or head-up display (HUD) in fighter jets and other aircraft superimpose vital information directly in front of a pilot’s field of vision, thereby eliminating the need to look down at dials and instruments. This information can include the altitude, direction and speed of the plane, as well as targets.[1]

Real Estate: With augmented reality, you can tour a commercial building or residence from the comfort of your couch. AR also allows buyers to change finishes and furniture to aid in their decision-making process.[2]

Space Exploration: In 1998, NASA employed AR to aid in navigation in its X-38 spacecraft.[3] Today, scientists are developing virtual and augmented reality applications that can assist with mission planning and operations, as well as data visualization.[4]

Source: What is Augmented Reality?