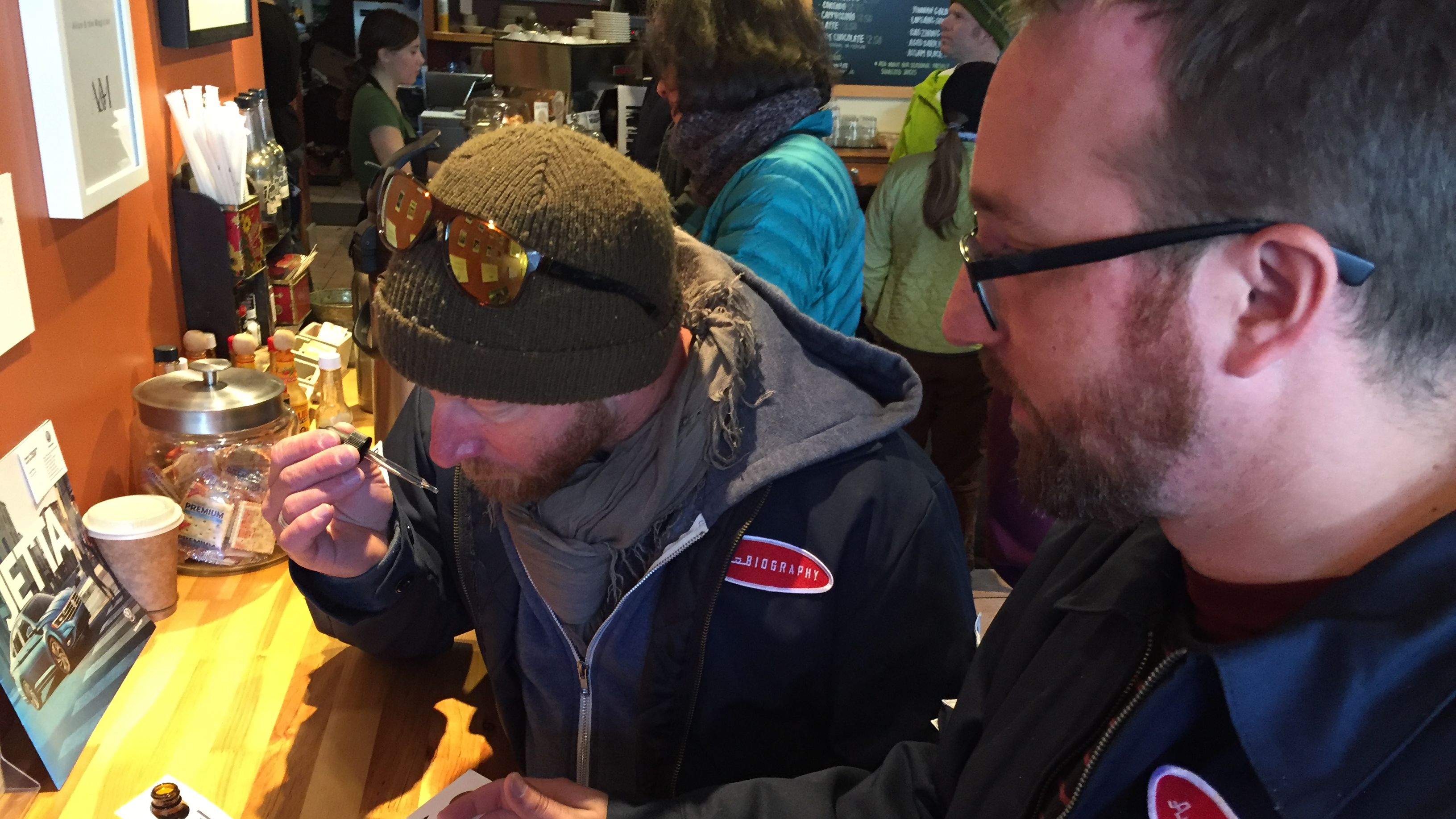 What do the arts smell like? Burlington company Alice & the Magician adds scents to events | Burlington Free Press

The founders of the Burlington flavor-and-fragrance company Alice & the Magician faced a creative quandary: They needed to make a car smell like a teenager’s car. For art.

To many, creating that scent for a performance-art piece called “AutoBiography” would be a frightening prospect. A teenager’s car? That sounds like an unholy mélange of stale food and sweaty socks.

To Aaron and Samuel Wisniewski, it sounded like a fun challenge.

The brothers who created Alice & the Magician imagined a car emanating old pizza, weed, beer and cheap perfume. The quandary was how to turn those potentially pungent smells into something that added to but didn’t overpower the audio and visual aspects of the piece.

“It’s going to be subtle,” Aaron Wisniewski said last week, a few days before the car-centric “AutoBiography” art event took place Sunday at the Marketplace Parking Garage. “If they notice it too much, I’m not doing my job. It’s not a Yankee Candle shop.”

In keeping with the art approach, Alice & the Magician needed to make its contribution more suggestive than literal. Rather than infuse pepperoni and mozzarella to evoke pizza, the Wisniewskis searched for scents bearing tones of toasted crust, dairy and meat.

“Everyone has a different scent experience,” Aaron Wisniewski said, “but there’s always that little bit of fantasy in there, too.”

Alice & the Magician explores the science of scent

Scent as an art form is a relatively new concept that is delved into on websites such as scentart.net.. Smithsonian magazine wrote in 2013 about what it called the “first major museum show to focus on smell” opening at the Museum of Art and Design in New York City.

Smithsonian also wrote in 2016 about Norwegian “scent artist” Sissel Tolaas. In May of this year, Tolaas told Financial Times that one of the artistic qualities of smells is that they bring people down to earth.

“We live so much of our lives through our devices,” she told Financial Times. “But smells can’t be experienced on screen. They put you right back into the body.”

Alice & the Magician came to be known in Burlington a few years ago as a “cocktail apothecary,” as its website notes. The company creates fragrances for cocktails “to give your drink depth & complexity,” according to the website.

Aaron Wisniewski said Alice & the Magician also does “scent branding” for companies looking for signature scents to fortify their brand. That scent can be bottled and sold, worked into posters or wafted subtly through buildings frequented by customers.

“The flavor-and-fragrance industry is a fascinating industry,” Wisniewski said, “because it’s always behind the scenes.”

He pointed to a study in the 1950s, when shoppers were hesitant to buy bread in supermarkets rather than bakeries. Supermarkets began pumping the smell of bread baking into their stores, Wisniewski said, increasing sales 40 percent practically overnight. More than the other four senses, the sense of smell sends signals “right to that reptilian, ancient part of your brain that links memory and emotion,” according to Wisniewski.

“If it’s done right, it can be really powerful,” he said. “That is why I’m so fascinated with creating scents for the arts, especially in an interactive theater event.” 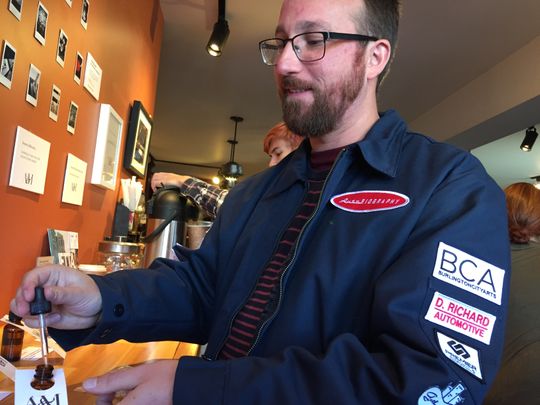 Buy PhotoSamuel Wisniewski, co-founder of Alice & the Magician, displays scent samples from the company at the Lucky Next Door cafe during the “AutoBiography” event in Burlington on Sunday, Nov. 4, 2018. (Photo: BRENT HALLENBECK/FREE PRESS)

Alice & the Magician provided “scent landscaping” for the local group Neat, with a Twist, which brought a show titled “Coming Home” to ArtsRiot on Oct. 27. The performances featured songs by folk- and pop-music legends such as James Taylor, Simon & Garfunkel, Carole King, John Denver and Joni Mitchell.

Aaron Wisniewski said he asked the creative team of Neat, with a Twist one key question: “What’s your emotional message?” They tapped into the “Coming Home” theme with what he called a “lumberjack-formal” approach displaying a classy, woody warmth, like a cabin with a fireplace in the woods on a chilly fall day.

“I wanted to create a sense of instant nostalgia,” he said. Before the crowds began assembling, Alice & the Magician used a cold-air diffusion system to fill the performance space with notes of mahogany, cedar and pine to add what Wisniewski called a “complementary, supporting piece” to the stage show.

“It’s this subtle background that can affect your mood and experience,” said his brother, Samuel Wisniewski. 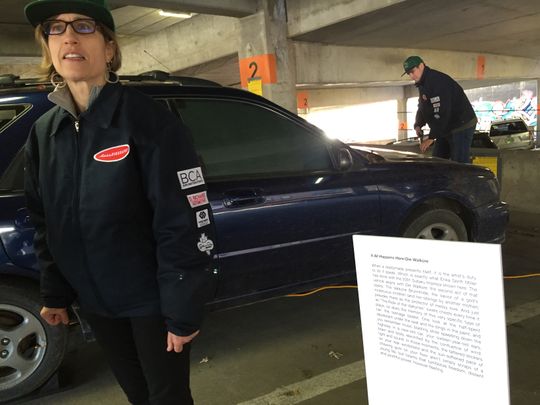 A little over a week later, Alice & the Magician scents could be smelled inside a downtown parking garage, where Vermont artist Erika Senft Miller created “AutoBiography: A Car Opera in Five Acts.” Miller applied elements of Richard Wagner’s “The Ring Cycle” to a performance-art piece exploring people’s relationships with cars.

“AutoBiography” unfolded on each of the five levels of the Marketplace Parking Garage, following a chronological progression including that teenager’s Subaru Impreza that vibrated with the sounds of loud techno music.

A Dodge Stratus filled with mirrors and disembodied vocal instructions from a GPS program conveyed, the program notes suggested, “continuance on a path that feels automatic rather than intentional.” That sense of drifting through life was augmented with what Alice & the Magician described as “flat notes of old coffee, sour milk… and cleaning solution.”

Miller, who devised “AutoBiography,” knew the sense of smell could create some of the piece’s most-evocative moments. She grew up in Bavaria, where she said the Catholic Church knew all about the power of scent with its incense-filled churches.

“The olfactory sense is the one that’s immediately connected to our emotional system,” Miller said, and because it bypasses cognition we can’t “edit it” as we can things we see and hear. Smells, she said, are also often harder to describe than other senses, making understanding of them more elusive.

“We can digitize everything,” Miller said, “but we can’t digitalize scent.”

Alice & the Magician tries to recreate scents without merely mimicking them. The faint smell of stale beer was the scent that came through most clearly in the Subaru, while the coffee jumped out at first sniff in the Dodge before the cleaning solution made its presence known.

One scene at “AutoBiography” showed a car accident where Alice & the Magician aimed for “prominent expressions of burnt tire, hot pavement, metal and adrenaline,” but between the strong visual images and the fact that parking garages already smell of rubber and asphalt, those added scents were harder to discern.

Aaron Wisniewski said one-plus-one doesn’t always equal two in scent landscaping. He said he and his brother will “throw a bunch of stuff at the wall” to see what sticks.

“You just keep messing around in the mad-scientist’s laboratory,” he said. “There’s a lot of art in the creation, and there’ s a lot of science in the art.”

Source: What do the arts smell like? Burlington company Alice & the Magician adds scents to events