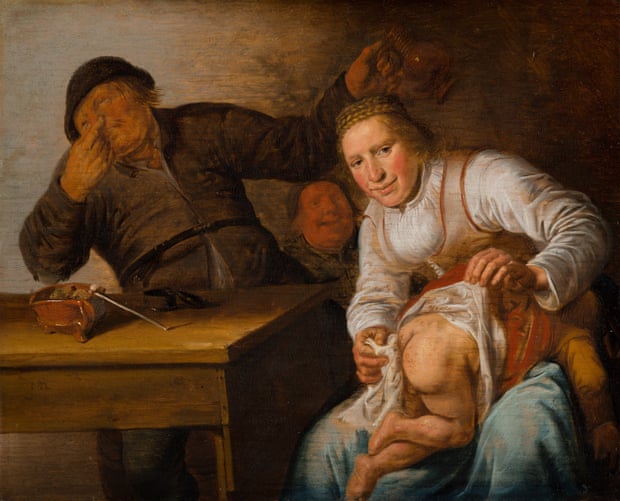 Fetid canals, flowers and fresh linen… ahead of its forthcoming new show about smell in golden age art, The Hague’s Mauritshuis has created a virtual tour with a scent box. Our critic inhales…

Art is for the eyes, but what about the nose? Can it rouse our olfactory senses? I smell the musty fug of a secondhand bookshop when I look at the paintings of Anselm Kiefer. A friend with more pronounced synaesthesia gets the scent of stewed apples in front of a Manet. A fellow critic swore he detected the tang of urine drifting off one of Tracey Emin’s appliqued blankets, but the piece was all about bedwetting so perhaps the suggestion was already there. Still there are ways in which art may appeal to the nose.

But they are neither simple nor obvious, as a highly unusual new show at the Mauritshuis in The Hague makes clear. Odour is intangible; scent is invisible. Just painting an object with a familiar smell doesn’t necessarily evoke it. Nobody claims to be seduced by the fragrance of a lily so much as the way it is painted, say, by Georgia O’Keeffe. Nobody holds their nose before the glittering fish in Velázquez’s Christ in the House of Mary and Martha. And I’ve yet to meet anyone who claims to be able to smell even one of the immense range of cheeses in a Dutch still life.

Dutch art of the 17th century, so devoted to making the world visible in every degree, from polished tile to costly tulip, often concerns itself with smell and taste as well as sight. The Low Countries apparently loved allegories of the five senses. Rembrandt painted an old woman trying to revive an unconscious man with smelling salts. David Teniers showed a man with a pot of dianthus and a woman nose-deep in one of its flowers. Rubens and Brueghel the Elder painted a sense of smell together: a colossal arbour of flowers in which Venus, accompanied by a bloodhound, inhales a posy.

In the foreground, two guinea pigs chew on vanilla pods, and there is a vicious-looking civet standing in for pungent odours. Although this is nothing compared with Jan Miense Molenaer’s coarse allegory of smell in the Mauritshuis. A mother wipes a baby’s smutched bottom – bared towards us – while the father reels back in disgust. Given all his smoking paraphernalia, however, the adult clearly gives out his own odours.

Fleeting: Scents in Colour is just waiting in the wings, all set to open the moment lockdown ends. It will shortly be available as a virtual tour with a four-scent fragrance box. It doesn’t just descant on the theme, although there is plenty of historical narrative about plagues, sewage, spices, tobacco and perfume in the Dutch golden age. It actually attempts to recreate the smells invoked by golden age art.

Thus the visitor standing before Abraham Mignon’s cornucopia of fruit and flowers – juicy plums, heavy-headed roses, an overripe melon – will be able to apply her foot to a pedal, releasing a lush, organic scent into the air. And paintings of the famous cloth-bleaching fields outside Haarlem will be accompanied by the sour scent of lactic acid tinged with grass.

Anyone will be able to purchase the scent kit, from which I now know the drowsy nutmeg-orange-clove smell of pomanders in Dutch portraits, and the pepper and cinnamon of Willem van Mieris’s A Grocer’s Shop. But far more interesting, and less predictable, is the fetid odour of Dutch canals.

I had never imagined such rankness when looking at cargoes unloaded from barges in scenes of old Amsterdam. But the cognitive dissonance is even greater when you consider the waters glimpsed through open doorways in pristine Dutch interiors. Even the canals of Delft, in the art of Vermeer and De Hooch, must have smelled.

Our olfactory memory is so strong that the scent of lime tea, for Proust’s narrator, summons his childhood just as surely as the madeleine. Indeed, smell is the sense most associated with recall (both are processed by the brain’s limbic system). Modern artists have made something of this. Marcel Duchamp dispensed the smell of fresh coffee – universal wake-up – at the 1938 International surrealism exhibition. In 1970 Ed Ruscha lined the walls of the US pavilion at Venice with chocolate, in all its overpowering sweetness.

But is Dutch art actually able to evoke smell? The medics in several 17th-century anatomy lessons hold up nosegays and incense sticks, against the stench of human innards. Ripe cheese oozes; a dog defecates; there is no end to the fragrant bouquets. An imaginative leap is nonetheless required. But what is so particular to this golden age art is its constant allusion to the physical substance and experience of our world.

Which is why the Mauritshuis endeavour is so significant. In recreating the scents of 17th-century canals, for instance, with all their animal and vegetable effluvium, the museum takes the paintings closer to the reality of what they depict. And thus to some deep questions about Dutch art: why did people (in greater numbers than ever before) want to buy scenes of dead fish, manure-strewn meadows and stinking canals? Who commissioned pictures of topers in smoke-filled inns? Why did artists paint decaying shellfish?

A painting of women folding sheets by Pieter de Hooch may not seem altogether altered now that we can smell the exact fragrance of the fresh linen. But it helps us to get closer to those rooms, and those women’s lives at that time. What the Mauritshuis achieves with its specially manufactured scents is not just the olfactory equivalent of a soundtrack to the paintings, but a kind of doorway in itself to the pungent realities of the past.

… as you join us today from Canada, we have a small favour to ask. Through these turbulent and challenging times, millions rely on the Guardian for independent journalism that stands for truth and integrity. Readers chose to support us financially more than 1.5 million times in 2020, joining existing supporters in 180 countries.

For 2021, we commit to another year of high-impact reporting that can counter misinformation and offer an authoritative, trustworthy source of news for everyone. With no shareholders or billionaire owner, we set our own agenda and provide truth-seeking journalism that’s free from commercial and political influence. When it’s never mattered more, we can investigate and challenge without fear or favour.

Unlike many others, we have maintained our choice: to keep Guardian journalism open for all readers, regardless of where they live or what they can afford to pay. We do this because we believe in information equality, where everyone deserves to read accurate news and thoughtful analysis. Greater numbers of people are staying well-informed on world events, and being inspired to take meaningful action.

In the last year alone, we offered readers a comprehensive, international perspective on critical events – from the Black Lives Matter protests, to the US presidential election, Brexit, and the ongoing pandemic. We enhanced our reputation for urgent, powerful reporting on the climate emergency, and made the decision to reject advertising from fossil fuel companies, divest from the oil and gas industries, and set a course to achieve net zero emissions by 2030.

Source: Watch and sniff: how to smell a Dutch still life… | Art | The Guardian