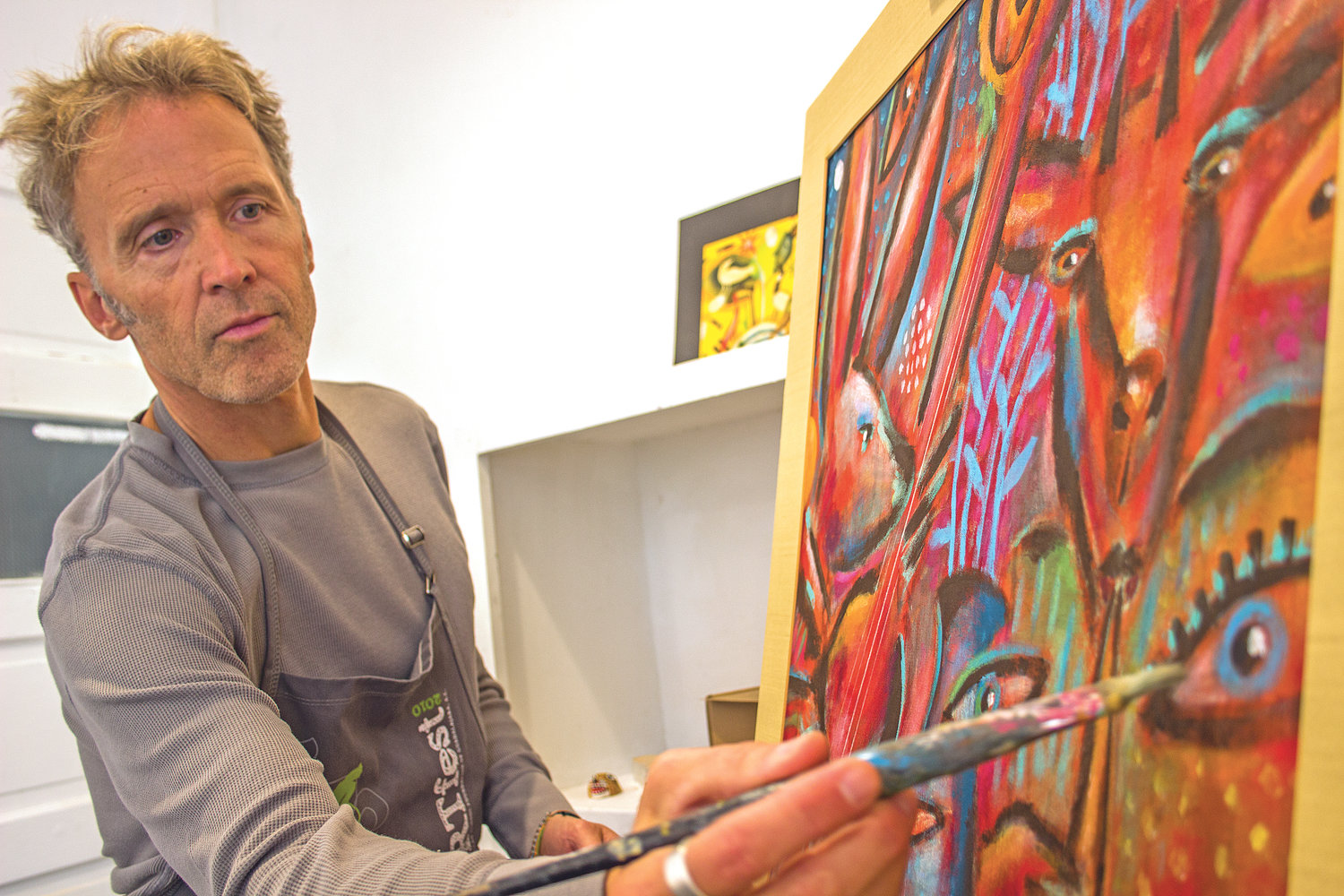 ‘Wake up and smell the tacos’ | Port Townsend Leader

By msensory team25/09/2019No Comments
John Hillmer draws his inspiration from jazz and all things Mexico, where he resides part-time each year.
LEADER PHOTO BY CHRIS MCDANIEL
Posted Wednesday, September 25, 2019 3:02 am
BLUES TACO

When it comes to tacos, the fillings can be anything edible. Painter John Hillmer approaches his art the same way.

“My own art is such a blend, and that is exactly what tacos are,” Hillmer said. “Obviously it is a Mexican reference, which is a country I really admire and love. It is insane, too, and wonderful. Tacos are sort of that amazing mix. And, you can put anything in a taco.”

Hillmer, 58, splits his time between Bend, Oregon and Mexico, spending most of his time near an expat community south of the border, he said.

“Certainly what is cool about Mexico is they name their streets after artists and poets. You don’t find that in the United States. You go down there and I think it is a more open society to art in general and a lot of people are producing it and creating it.”

Hillmer, a Centrum artist in residence, is the star of the “Blues Taco” exhibit this weekend at Fort Worden. On display are paintings and prints playfully exploring Hillmer’s love of music and the ubiquitous Mexican street taco, as well as art, spirit and travel, Hillmer said.

“There will definitely be some Coronas, and probably some wine. There will be both sides of the border. I will have a mix of new paintings. These are works in progress. Then I will have prints. It will be a big mix of stuff.”

The theme of music runs deeply through Hillmer’s work which has accompanied many jazz and blues artists in Port Townsend and beyond.

“I lived in Seattle and that was really the start of my adoration for jazz music and blues music,” Hillmer said. “I worked for Earshot Jazz, a nonprofit in Seattle, for about four years and I started doing all this. I was using music as metaphor and doing all their design work and then editing a lot of their stuff. I really became hooked.”

“John Hillmer’s work brings the vibrant colors of Mexico into play as his characters dance onto his canvas,” said Mary Hilts, Centrum program manager. “His storytelling is deep, images of the pain and sorrow of world events inform his work, terrorizing elements are depicted as metaphor, ballistic missiles are disguised as fish falling from the sky.”

Hillmer’s symbolism softens the blow of reality as it drills into the consciousness of common humanity, down into the soul, Hilts said.

“His work plays with the balance between joy and sorrow, reality and the subconscious — always inviting the viewer to be light and playful all the while keeping our eye on the ball.”

Hillmer said Blues Taco is something of a metaphor to reconnect, to break down and to reach out over borders, not to build walls. And since there are a number of roosters in the show, it’s also something of a wake up call, he said.

“Wake up and smell the tacos.”

The roosters are part of Hillmer’s love of birds in general, which are prominent in his artwork.

“Birds are the barometer of a healthy environment and a lot of birds in my stuff do speak to that,” he said. “Birds are spirit.”

At first glance, much of Hillmer’s work could be compared to that of “Saludos Amigos,” a 1942 Disney film that integrated live action cinematography with animation. That film was inspired by a trip to Latin America, much as Hillmer’s has been inspired by his time in Mexico.

“I went to a little town and sort of fell in love with Mexico and knew I had to keep going back,” he said. “For the last 20 years I have done that. I lived in Guadalajara for a while and taught at the American school there. I got a master’s degree in international education and worked with kids there. It was great, probably my best job ever.”

Now, Hillmer resides in a small town a short drive from San Miguel.

“That is gringo central. I think there are a lot of people from Port Townsend who snowbird there. It is lovely. But, I also wanted to get away.”

Another prominent feature in Hillmer’s work is disembodied eyes.

“I did a whole series called ‘Ojos del Jazz’ (Eyes of jazz),” he said. “I continue that. I just love it. It could either be a reference to looking and seeing souls or the eye of the beholder. You get to decide what that means.”

Among his many sources of inspiration, the works of Picasso stand out, Hillmer said.

“Picasso said be fearless and jump in there, so that’s what I do. Then, when I get into it, almost always I am listening to music. Then something usually happens.”

Source: ‘Wake up and smell the tacos’ | Port Townsend Leader