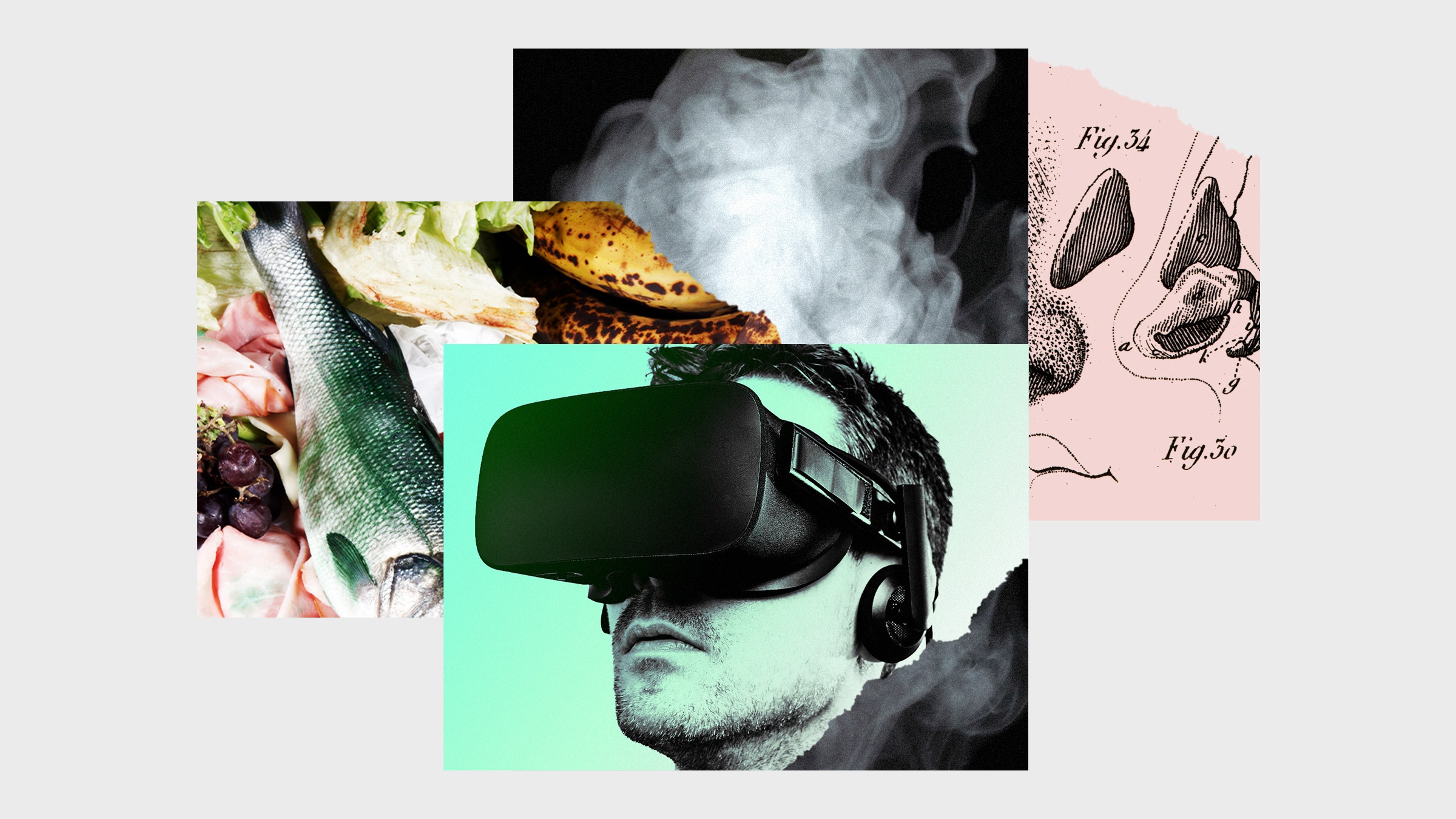 Scent is the realest sense. For virtual reality to feel truly immersive, it needs to start stinking it up.

VR STILL STINKS, and its stench has many notes. It reeks of rich white guys, who wildly overfund and consistently overhype the always-on-the-verge-of-a-breakthrough technology. It has a festering funk of entrenched privilege, despite its purveyors’ claims that it fosters empathy and inclusion. It’s too expensive and only getting more so. Meta’s and the crypto community’s forays into VR stand to make it more putrid. It also, some complain, smells underbaked: In VR, nobody has legs. But perhaps more than anything, the metaverse stinks because it doesn’t smell like anything.

Smell is VR’s blind spot. Most VR technologists don’t even notice the lack of smells or worry about its consequences, despite the fact that convincing smell technology is becoming available.

Smell is arguably our realest sense—the sense that most grounds us in reality. If virtual reality wants to deliver on its potential, it needs to wake up and smell its nauseating scentlessness.

BEFORE YOU TURN your nose up at Smell-O-Vision 2.0, get a whiff of what whiffing can do for you.

Smell helps us detect incoming threats. We won’t eat food that smells spoiled, and we move away from a hint of smoke or gas. We are evolutionarily programmed to respond to smells swiftly, and make lasting judgments about them. Threat-detection in smell also reminds us that we’re vulnerable, and blurs the lines between our bodies and the environment. These factors all deepen immersion—one of virtual reality’s chief aims.

Smell also raises the emotional stakes and situates an experience inside our personal histories. For sight, sound, taste, and touch, a stimulus travels from the sensory organ to the brain’s more evolutionarily recent thalamus, which handles complex processing skills. Smell is different: It’s all old brain. Smells bypass the thalamus, traveling straight from the nose to the olfactory bulbs located behind the spot where eyeglasses rest on your face. This tongue-like protrusion of nerves both processes smells in the brain and is closely entangled with older brain regions, specifically the amygdala, which handles emotions, and the hippocampus, which deals with memory. When an important memory forms, you usually feel emotions. If you’re also smelling something, memory, emotion, and smell will fuse. Hence why smells conjure memories with such startling vividness: the bright, acrid hit of chlorine undercut with stale sweat that situates you unmistakably back in your high school swim team’s locker room; the downy mix of rosewater, burnt toast, and cigarettes that evokes your grandma’s love.

Nonthreatening smells also guide us in surprising ways. Smell helps you choose a mate whose immune system would combine robustly with yours for strong offspring. (It plays a real if lesser-understood role in non-heterosexual mating too.) You can sense other people’s emotions—fear, happiness, disgust—via bodily smell alone. Parents can identify their newborns by smell, even after acquaintances brief as ten minutes. Smell is intimacy made sensate. Its knowledge precedes words. Smelling makes people uncomfortable because it mashes all the limbic buttons and leaves us bereft of language. Unlike vision, which surveys and controls a scene from an emotional distance, smells act on us instantly and make us relinquish our agency. All this can deepen immersion.

Most importantly, smell matters because all our senses concatenate and build on each other. Smell is a “support” sense: not always noticeable, but often operating powerfully under the radar, and easily activating strong emotions, judgments, and memories without conscious thought.

In contrast, the loss of smell, anosmia, is almost invariably described by those who’ve had the condition as awful. Covid anosmics suffer from higher rates of depression and anxiety. They lose interest in sex as well as food, since taste is so dependent on smell. Most of these people regain their smelling capabilities, but it may take months.

All this immersive, world-building magic that smell can supply aligns with what VR wants to offer. These days, VR’s chief aim is to help users experience what it feels like to be someone else. It’s “a quest towards embodiment,” says Lisa Messeri, an assistant professor of sociocultural anthropology at Yale who studies VR. “And when we think about what the body is, it’s this compilation of senses, in an incredibly reductive form.” Messeri is quick to caution that “embodiment is so much more than a collection of senses”—conflating embodiment with empathy is a mistake VR storytellers can learn to avoid. However, sensory experiences are still the primary levers that VR can pull to immerse us in their worlds. And right now hardly anyone pulls perhaps the most powerful lever of them all.

“What does a laser beam or a unicorn smell like? We get to invent that.”

Among the few who smell the sweet smell of victory in VR smells is Aaron Wisniewski, CEO and founder of the olfactory VR manufacturer OVR Technology. Wisniewski draws a timely parallel: “Covid anosmics often say ‘I’m anxious. I’m depressed. I feel like everything’s in black and white and I feel really disconnected to everyone and everything.’ Wow, that sounds a lot like what people experience who spend a lot of time online.” He continues: “Unless we engineer our sense of smell into digital worlds that we are increasingly in, we’re going to suffer a lot of negative consequences psychologically and socially.” OVR Technology aims to close this sensory gap. Its flagship product, the ION, is a snap-in, refillable cartridge with nine chemical compounds that can be mixed into hundreds of different scents and released to the user’s nose via Bluetooth cues. According to Wisniewski, our current VR, with its lopsided emphasis on sight and sound, is “essentially engineering the humanity out of our lives.”

But the current state of smells in VR reveals a paradox: Unless its creators add smells to VR carefully, it risks amplifying the uncanny-valley effect, or what VR adherents call “breaking the immersion,” and further engineering out our humanity.

Smell VR tech has made progress since its origins in the late 1990s, when Myron Krueger, who coined the term “artificial reality,” received a DARPA grant to develop smells in VR medical training simulations. While the accuracy of smells and replicating how smells disperse naturally under our noses has improved, smell VR tech still faces basic challenges, like a limited number of smell cartridges that can fit into a headset, each with finite capacity.

But literalism needn’t be the goal. Adding smells to VR works best if it’s approached stepwise or elliptically. Our noses are difficult to fool—the number of smells humans can distinguish may be as many as one trillion—so it’s sometimes better not to try. Wisniewski recalls an OVR project in which they labored to reproduce a forest’s smell exactly, but users found it not quite right. OVR then replaced the complex forest smell with a single molecule, isobornyl acetate, that users consider “forest-y.” “It was a much, much more convincing and immersive experience because people’s brains filled in the last ten or twenty percent,” Wisniewski recalls.

Hijacking the body’s natural capabilities is a fertile area of smell VR research. Jas Brooks, a PhD candidate and researcher at the University of Chicago’s Human-Computer Integration Lab, has done promising work on the trigeminal nerve in the face and nose. Whereas the olfactory nerve senses chemicals—the smell itself—​​the trigeminal nerve senses a smell’s tactile qualities (like prickly carbonation or bleach’s sharpness) as well as temperature shifts.

Brooks’ team harnessed the trigeminal nerve to create temperature illusions in VR. The experience consisted of a trek through a wintry storm. When a user approaches a cabin furnace, a cayenne pepper tincture solution wafts under her nose, stimulating her trigeminal nerve to make her feel physically warmer. Suddenly a winter storm kills the furnace’s heat and bangs the cabin’s door open. Eucalyptus oil emitted from the headset makes the user feel chilly.

Brooks has also generated “virtual smells” to study stereo-smell capabilities, or how we use both nostrils to locate a smell in space. They wondered whether one could replicate this by stimulating the trigeminal nerve electrically–essentially, making a fake smell.

To test this, Brooks’ team placed a diffuser with peppermint essential oil within an empty room. Wearing VR headsets as blindfolds and using a white noise machine to muffle sound, participants were asked to locate the source of the peppermint-oil smell using only their noses. “In the first condition, they were looking for a real smell … with no stimulation to the trigeminal nerve except the odor itself,” Brooks explains. “In the other condition, our device stimulated their trigeminal nerve, but there was no odor in the room.”

What makes this experiment extra-weird is that virtual smells don’t “smell” like anything specific. It’s an empty smell, just the feeling of the trigeminal nerve firing that reminds us of smelling. “We just told the participants, go find something” with their nose, says Brooks. “There was no training. Yet people were able to find it.” (Admittedly the study was tiny, with just four participants.) Generating an imaginary smell and then using it to navigate 3D space—you can’t get more immersive or environmental, more VR in spirit, than that.

THOUGHTFUL BIOHACKS LIKE Brooks’ bring smell’s power inside VR while circumventing the uncanny valley problem. But VR isn’t only about replicating actual reality. That can get boring fast. VR also holds the promise of creating new worlds with new internal rules, sensations, and logic. “What does a laser beam or a unicorn smell like? We get to invent that,” says Wisniewski. Brooks underscores the immersive, reality-altering quality of encountering smells in the real world: “It’s not like our sense of perspective or awareness is static; it changes based on what’s available to us,” says Brooks. “When smell captures your attention, it is such a vivid, evocative moment that it almost blocks out everything else.”

Smell is a big sensory gun that requires delicate handling. Inserting smells into VR can distract, overwhelm, or repulse. But used sparingly, and designed to fit the right context and coordinated with the other senses, playing with smell—even distorting it—can render a strange world more human, draw us into exploring new environments, and imprint that experience with emotional force and stakes. A richer reality—actual or imagined—is right under our noses.