Angelina Aleksandrovich was fascinated by technology and its capabilities to work with elements in nature to create exciting innovations.  Working on nature’s capabilities, she grew a VR headset out of mushroom mycelium for her graduation project. This project landed her a career in Extended Reality (XR) –  an umbrella term used to describe immersive technologies that can merge the physical and virtual worlds. It combines all the immersive technologies — augmented reality (AR), virtual reality (VR), and mixed reality (MR) plus those that are still to be created. 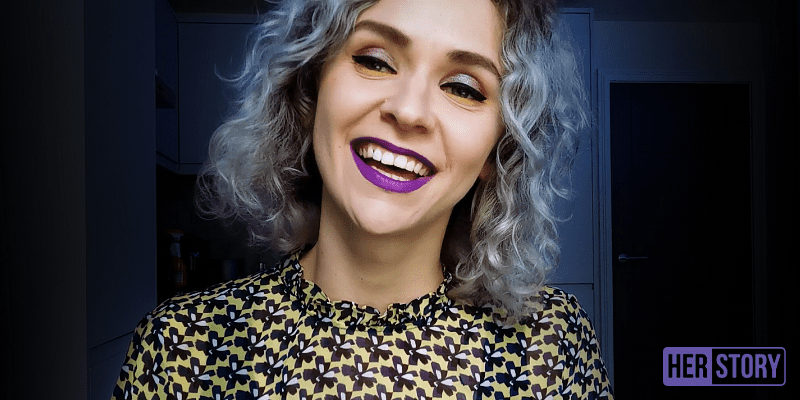 She worked in a VR production company creating multi sensory brand experiences including spatial audio, scents and temperature control for big brands.  In 2018, while going through her hard drive she stumbled upon photos of her work from her Art Foundation degree in Fine Arts: Sculpture in Central Saint Martins, University of the Arts, London (UAL). It reminded her of her passion, the subject of human sexuality.  She wanted to renew her long lost interest with a cool project that combined her tech and production expertise, but ended up creating Raspberry Dream Labs (RDL), a collective creating innovative multi-sensory solutions for for sexual experiences using XR tech. Though Angelina’s official role at RDL is founder and creative director, but like many early-stage startups she also fills in other roles like producer, digital designer, 3d artist, social and marketing manager. Following a passion When she was growing up, her parents took a different track altogether when it came to explaining about the birds and bees. They would tell her she was found in a cabbage or a stork dropped her off.  Lacking early sex education in school and hearing stories like this, Angelina was always interested in understanding the truth about sex and sexuality.  Being a child in Ukraine in the late 90s and early 2000s, didn’t help Angelina understand the subject.  “Discovering myself as a sexual being as an early teenager wasn’t warmly welcomed by my peers – when I was 12, I looked, felt (and acted) like a fully formed, grown-up woman, and of course, I was subjected to giggles, nasty jokes, and dirty comments,” says the 26-year-old founder.  After moving to the UK, she found refuge in art often using her body as the primary tool for art making. She followed up her art degree with a Graphic Design Communication degree. In her art career, predominantly sculpture and performing arts, she explored ideas of feminism, gender, identity, robotics, sci-fi and sex. Transhumanist and futurist vision  Describing herself, Angelina says, “I am a futurist and transhumanist specialising in creative storytelling through extended reality (XR) tech.” Transhumanism, Angelina explains, is “a philosophical movement that advocates for the transformation of the human condition by developing and making widely available sophisticated technologies to greatly enhance human intellect and physiology”.  RDL’s aim is not to replace human sexual relationships with technological solutions, but to enhance and expand them beyond physiology and create a new era of limitless experiences.  Her futurist and transhumanist vision forms the core of RDL, which investigates the potential of humans’ multi-sensory capacity through academic research and immersive experiences and improves the relationship people have with their own sexuality, themselves, and others. It also works to break the taboos concerning sexuality and create a healthy sex-positive future by introducing a new era of sexual experiences that are no longer restricted by the limitations of the human body.  To create this, RDL is currently working on three different projects. One, Sensory Seduction, which is an on-going artistic research exploring the nature of multi-sensory sexual arousal and how it can be shared between multiple individuals in XR. The startup has created Raspberry Dream Land, a work-in-progress all-inclusive VR universe made out of thematic islands, a hub for VR Sex Tech and RDL’s virtual headquarters.

Another project, the UNSENSORED series is a community centred project that helps initiate conversations about sex that are body-positive, consent-positive and bring back focus on sexual wellness.   The series features four types of events, which help disrupt existing taboos and stigma around sex not only in physical reality but also in the virtual. The UNSENSORED talks are bi-monthly mini-conferences presenting multiple facets of sextech. The UNSENSORED chats are bi-weekly sharing circle where people meet in VR Raspberry Dream Land world to talk, share, listen and learn from others about all aspects of physical and virtual sex. The UNSENSORED works are interactive online workshops to boil up fantasy and spice up senses. The fourth event is UNSENSORED nights which are unique sex-positive parties for like-minded individuals to engage in immersive entertainment and performances extending sexual experiences with the use of technology.

Challenges and censorship Angelina throws light on two constant challenges most sextech brands face – limited access to funds and advertisement censorship. Polly Rodriguez, the co-founder of Unbound, a New York based sextech had earlier told HerStory about similar censorship on platforms like Facebook and Instagram.  Expounding on the circumstances of this kind of censorship, Angelina says, “The cis white male patriarchal system, in which we currently are, doesn’t support the diversity of sexual expression and attempts to suppress female-founded brands that are dedicated to revolutionise sexual health and wellness industries with innovative ideas and products.”  Angelina says that not long after creating accounts and publishing a few posts on Facebook owned platforms, they got shadowbanned on both Instagram and Facebook, which means that their content is partially blocked from a wider online community. New users are not able to find them through organic search and their posts won’t appear in the “explore” tab as a recommendation based on the user’s interests. In addition to that, they are banned from creating paid ads on both platforms, as the content is classified as ‘sensitive’ and ‘violates community guidelines’.  “This is absurd, as the platform allows ads related to erectile dysfunction, but unfairly bans ads for women’s pleasure,” adds Angelina.

The way ahead  The global coronavirus pandemic has proved to be a silver lining for the sex tech industry. Angelina agrees that it has led many people who previously did not consider sexual wellness apps, teledeldonics and VR simulators, to start finding relief in these to help build intimacy in isolation.  “I’m pleased to see the growing demand and interest in this field from a wider community worldwide. Finally, people get to experience how technology can extend our intimacy and perhaps make new sex tech positive habbits,” Angelina says. Angelina began the startup with money from her savings and borrowing on her credit card, which was not a lot and hence, most of her projects have a DIY vibe. She says the startup makes enough revenue to keep them afloat but in order to expand and launch a variety of projects, they need to seek external funding in the future.  Speaking about future developments, she says RDL is currently working on bringing the concept of UNSENSORED nights into VR, expanding its virtual world and building a WebXR platform to host it. She hopes to start the second phase of Sensory Seduction research once the social distancing measures are lifted. (Edited by Rekha Balakrishnan)