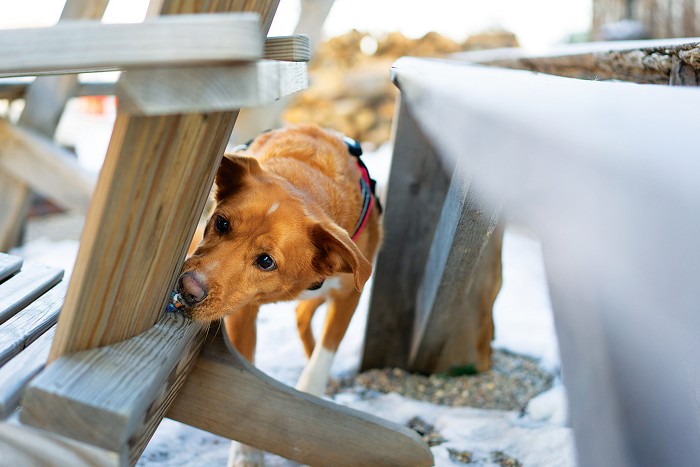 Laurie Witucki first stumbled upon the sport of scent training while looking for a fun way to work with her anxious rescue dog, Rue.

Rue was fearful around other dogs, so she couldn’t compete in more traditional agility competitions. But as a border collie mix, Rue needed to be entertained. “She wants to do something or she would drive you crazy and herself crazy,” says Witucki, a chemistry professor at Grand Valley State University.

Scent training, also called nose work or scent work, requires dogs to seek out specific hidden smells, then alert their handlers. The training is the same as that used for serious dog occupations, like detecting drugs or finding missing persons.

“It doesn’t matter if the scents are explosives or an essential oil or morel mushrooms,” Witucki tells Newscripts. If a dog gets a treat every time they identify a specific scent, “they will happily go out and find it.”

The organizations that run nose-work competitions use essential oils as the scents the dogs need to find. So as any good chemist would, Witucki set out to identify exactly what was in them.

With the help of the undergraduate majors in her organic chemistry lab, Witucki used steam distillation to extract the essential oils most commonly used in competitions: birch, anise, clove, myrrh, vetiver, and cypress.

They then used gas chromatography/mass spectrometry to compare the distilled scents to commercial samples often used by competition judges. Most were in good shape, Witucki says. But myrrh was a mess. The samples Witucki and her students tested varied widely depending on what region the original plant came from. Plus, large percentages of the commercial samples were the chemical solvents used to extract them.

In the nose-work world, myrrh is known as a particularly problematic perfume for pooches. Witucki thinks this wide variation could be why. Who knows if the dogs are smelling the myrrh itself or the solvents?

Witucki has plenty of ideas for future experiments. She and her students are planning to test several dozen highly trained nose-work dogs to see whether they are actually smelling myrrh or the solvents. She wants to look at how long the essential oils can retain their smell. And she hopes to one day work with dogs who sniff out medical conditions like diabetes or cancer to find out exactly what they are smelling.

Witucki has found the dog training community eager to hear her results. “That could be because we’re just all so impressed with our dogs—their ability to find these odors is amazing.”

The sweet smell of sunshine

Credit: Shutterstock
Fresh scent: Sun is the vital ingredient to the smell of line-dried laundry.

The team dried wet towels in different conditions: a sunny balcony of a chemistry building, that same balcony covered with a tarp, and on a rack in a dark lab nearby. They then sealed the towels in bags and analyzed the compounds they emitted.

The towels that dried in the sun let off more and different compounds, such as the aldehydes pentanal, hexanal, heptanal, octanal, and nonanal, compared with those that dried inside or under the tarp. “It had to be surface photochemistry that’s developing this stuff,” explains University of Copenhagen’s Matthew Johnson, who led the study. Line-dried laundry “does smell fresh. And now you have evidence.”

Studies like these are a “lovely way of showing that chemistry is part of our everyday life,” Johnson tells Newscripts. “There are some really fascinating things going on right under our noses.”