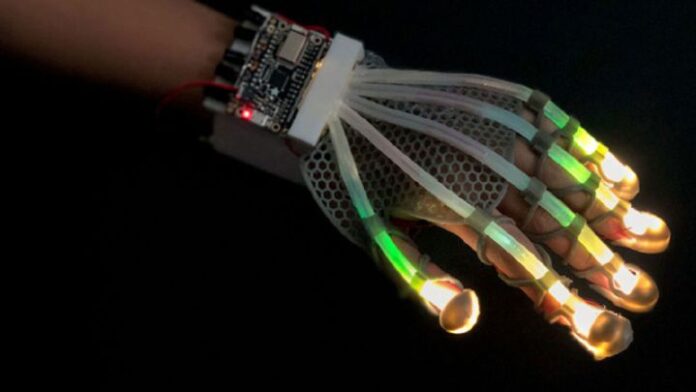 The virtual reality experience is a field in which there is much to explore. There are many advances that point to an increasingly integrated experience becoming more and more feasible in terms of senses. Taste will be a challenge, but for now users will be content to touch virtual reality with these new sensory gloves.

Feel virtual reality in your hands

The immersive experience that virtual reality has is greater than that of any multimedia experience. It puts you in the shoes of a main character and you feel like you are in the action. Your eyes and ears keep you in the digital world, but the experience could be even more enriching if you had an extra sense to help you, such as touch.

And this is where the guys from Cornell University have managed to create a glove with extensions on the fingers that is capable of simulating touch. According to Engadget, It has a fiber optic system that achieves by means of light beams that detect the position of the hand and the proximity in front of a virtual object that they have nearby. However, this practice is very basic and still has to work on at the sensor design level.

As you can see in the video, the glove is made of a simple wiring, a fastener and some chips that are currently exposed. Of course, the tests are done with a wireless Bluetooth connection, so the use of these devices will not have any space that makes the movement of the user impossible.

What would these gloves do?

They may not now have a 100% functional application, but it is a fact that these sensory gloves will put a spin on virtual reality. At the moment it is a prototype, but its applications in the world of augmented and virtual reality are many.

We have recently seen a command that simulated the gravity of virtual objects, an advance that added to this could give rise to a new control system that would not only focus on entertainment, but also on the control of robots through augmented reality , for example. We will have to wait to see the progression of this system and how far it advances, if towards the more business section or has applications for the general public.