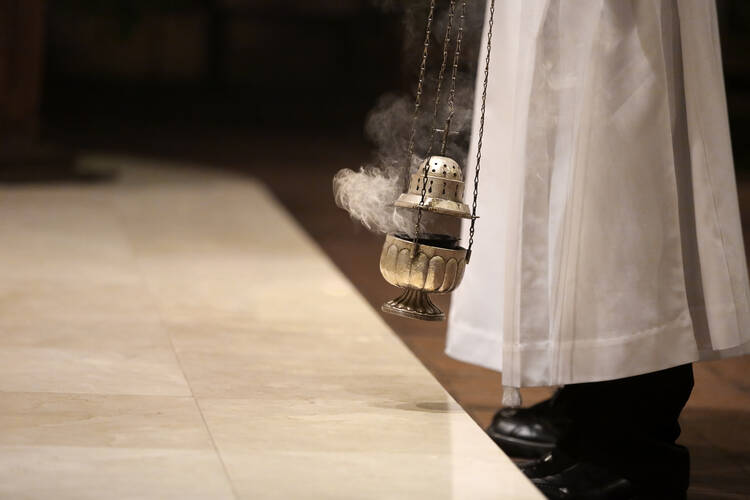 The sights, sounds and smells that help us feel close to Jesus | America Magazine

A Reflection for Monday of Holy Week

Mary took a liter of costly perfumed oil
made from genuine aromatic nard
and anointed the feet of Jesus and dried them with her hair;
the house was filled with the fragrance of the oil. (Jn 12:3)

Today’s Gospel passage is so visceral, it draws us into an Ignatian contemplation of the scene almost effortlessly. We can imagine ourselves as Mary anointing Jesus’ feet, Martha characteristically hustling about but stilled with love at her sister’s gesture or even as Lazarus, who has already tasted his own resurrection, watching Mary use the same funeral oil to annoint the living Jesus as she had used on him in the tomb he’d walked out of.

Even placing ourselves as simple observers in the scene—perhaps as one of the people who came to gawk at Lazarus, having heard the rumors—the sensory details the Gospel evokes are overwhelming. When Mary bends down to wash Jesus’ feet with her hair, the dinner conversation ceases, silenced by the intimacy of the gesture. The smell of the funerary oil fills everyone’s noses, conjuring as only smells can their memories of loved ones lost, and they face the realization that the end is likely near for their teacher and friend.

The kind of silence that descends in these moments is thick and reverent; no one moves, for fear of breaking it. So when Judas suddenly complains that Mary has wasted the oil, tempers spike immediately. Even the Gospel writer snaps in his retelling: “He said this not because he cared about the poor but because he was a thief and held the money bag and used to steal the contributions.”

It is in this context that we must read Jesus’ oft-maligned response, “You always have the poor with you, but you do not always have me.” Jesus does not say, in a shocking departure from his other teachings, that the poor do not matter, but rather: Cherish this sacred moment you have with me. Bear the reverent silence, breathe deeply the smell of oil, let your heart be broken at the sight of Mary anointing my feet and realize we are nearing the end.

Source: The sights, sounds and smells that help us feel close to Jesus | America Magazine