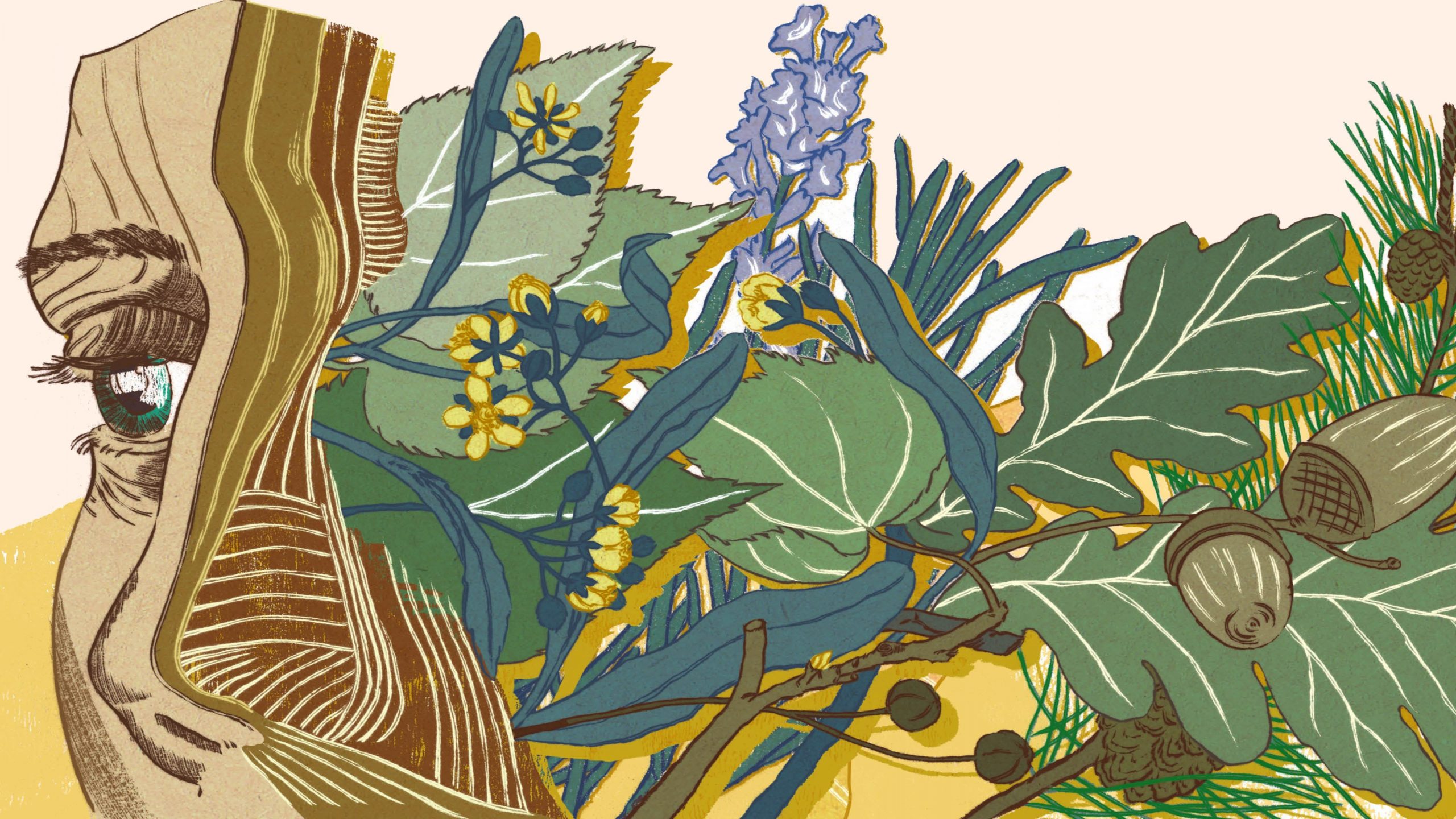 By msensory team26/10/2021No Comments
Their odours send signals about marauding insects or changing soil conditions, but also connect with human culture and memory

I was a nosy child, quite literally. I was always smelling things, poking my little snout between the pages of books and newspapers, into spice jars in kitchen cupboards, hovering at the edge of the rubbish bin and delving between the plants in the garden.

Later, my nose got lazy. My eyes and ears became dominant. The internet did not help, imperiously eliminating all senses except the visual and aural. And so it is for much of our culture. Architecture aims to please the eye; music, the ear. The nose too often gets left out.

A pine tree called me out of this olfactory slumber. In my forties, on a sun-warmed slope of the Rocky Mountains in Colorado, sharp resin and warm vanilla-like aromas from a ponderosa pine filled me with delight and curiosity. Why does the tree smell this way? I soon started asking the same question about other trees and how their smells are linked to human culture.

These questions emerged from my immediate experience of the tree, but were rooted in years of work as a professional biologist. Through study of forests and trees worldwide, I have investigated how human culture and wellbeing are connected, sometimes in unseen and surprising ways, to the lives of other species.

By sniffing the pine, I tuned in to the primary language of trees. All trees talk with molecules, both above ground between leaves and below the soil through their roots, conspiring with one another, beckoning fungi, scolding insects and whispering to microbes.

Aroma is also our primal tongue. Unlike our other senses, which are wired through multiple layers of processing and interpretation, nerves from the nose link directly to the brain’s centres for memory and emotion. When we smell a tree, the deepest parts of our brains are “listening” to the languages of trees. Pine trees signal to one another with their resinous, spicy aromas. Air-borne molecules deliver messages about marauding insects or changing soil conditions. For some species, the right mix of chemicals is interpretable only by kindred trees with sap of a similar aroma. In this way, tree clans whisper to one another in dialects incomprehensible to other trees.

The same aromatic molecules sicken and kill insects, befuddling the links between their nerve cells. When a tree detects insects chewing into its trunk or leaves, or receives an aromatic alert in the form of volatile chemicals drifting through the air from the leaves of neighbouring trees that have themselves been attacked, the tree boosts production of insecticidal chemicals. The predators of tree-chewing insects — carnivorous and parasitic beetles and wasps — also sniff the air for these aromas and use them to home in on their prey. In this way, trees summon aid.

Trees also signal from one to another through the air about droughts, changes in temperature, mechanical damage, salt stress and the state of their connections with microbes. Although these volatile molecules and their roles as signals have been detected in every plant species studied to date, our scientific understanding of how these connections function to interconnect plant communities is in its infancy.

Tree aromas also create rain. Yearly across the globe, vegetation sends over a trillion kilogrammes of molecules into the air, a measurement derived by scientists at the National Center for Atmospheric Research in Boulder, Colorado and their colleagues. Raindrops cannot form without some tiny speck around which to first gather. These seeds can be motes of dust or clusters of molecules that drifted upwards from trees. Next time it rains, know that many of the falling raindrops first formed around what we experience here on the ground as tree smells. 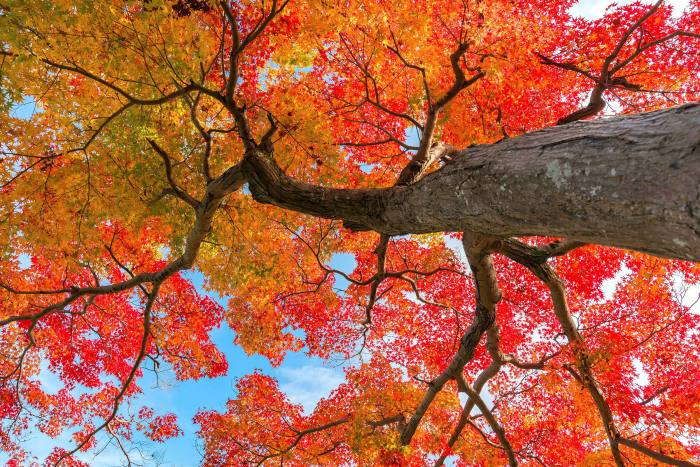 ‘When we smell a tree, the deepest parts of our brains are “listening” to its language’ © Shuichi Segawa/EyeEm/Getty

We also encounter tree aromas indoors. Lift a gin and tonic to your nose: there is the aromatic embodiment of globalised trade. The G & T is an imperial troika of trees: juniper, cinchona and lime. The most vigorous note is the spiky, herbal odour of juniper berries, the energising smell of one of the northern hemisphere’s most widely distributed trees, first added to gin by British, French and Dutch distillers. Alongside, a tang of lime juice, a hint of sweet citrus but mostly the bright, bitter smell of oils from the lime skin. This fruit is from a tree descended from wild progenitors in the foothills of the Himalayas. Last, as you raise the glass to your lips, bitter quinine, an antimalarial from the bark of the South American cinchona tree, is spritzed into your nostrils by the pop of sparkling tonic water.

The aromas of your drink were mixed by the hand of colonialism, with all the fracture and injustice that implies.

Trees also spice the air of the kitchen. Crack the lid on the casserole dish and bay leaves greet our noses with their energising smell: a blend of eucalyptus and cardamom, with hints of pepper and lavender. For me, this is an aroma of childhood, evoking the gentle simmer of a stew whose flavours will mingle for hours, in a pot large enough to feed several people.

As with other aromatic memories, the bay leaf does more than suggest these associations to me: it is them. Aroma plunges me directly into memory. For the bay tree, though, the chemicals that made these smells are defensive, deployed as insect deterrents. 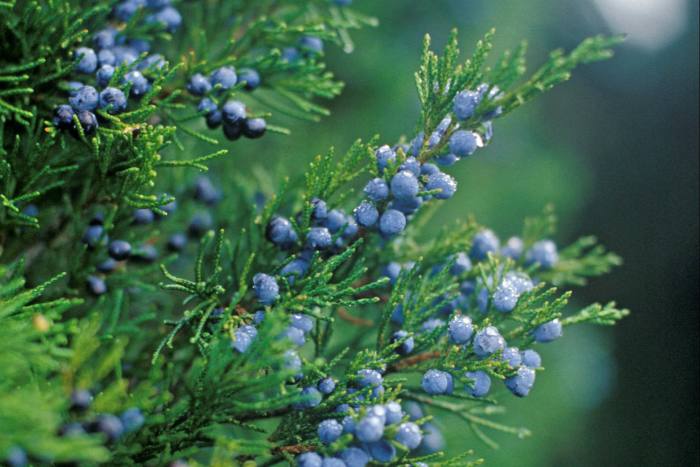 Juniper berries, one of the ingredients of the gin and tonic © GAP Photos/Adrian Bloom 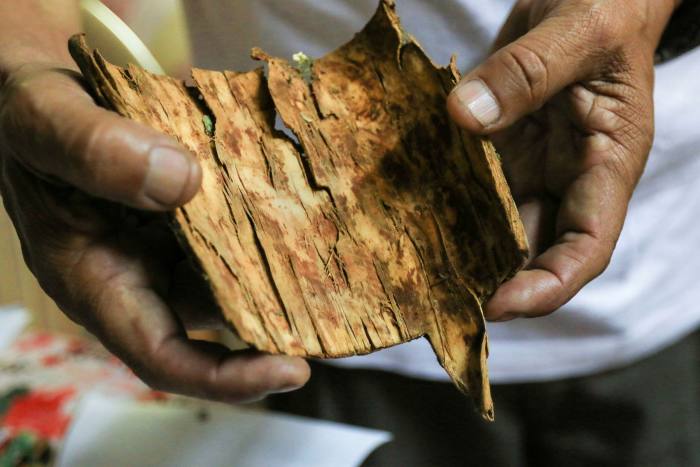 Bark from a cinchona tree, which contributes bitter quinine to tonic water © Celso Roldan/AFP via Getty Images
Trees also carry collective memory. Olive trees have communicated and reminded us of peace and prosperity for millennia. On many British bullion coins, Britannia holds an olive branch in her hand. An eagle on the American dollar bill clasps olive branches in talons and the banknote’s numerals are wrapped by fruit-laden olive boughs. In all the Abrahamic religions, life and light are symbolised by the olive.

Yet, olives are not just symbols for peace and plenitude. No other plant can produce as many calories of food for humans from the arid parts of the Mediterranean. In wetter areas, or under intense irrigation, grains and fruit trees are also highly productive. But in the dry hills, olive reigns and gives life to the humans who tend its groves. When we smell the bright, verdant aroma of olive oil, our senses connect to this history.

This connection of tree aroma to human desire — the promise of a good meal, for example — is no accident. Those trees that most effectively beguiled and served human senses became the ones we tended for the past eight millennia, ever since we started to domesticate the tree. Evolution carved knowledge of human senses into the olive tree’s genome. This “knowledge” is in the particular blend of aromatic chemicals in the olives’ oil. To this day, horticulturalists seek out trees for breeding that have high concentrations of chemicals that our noses find pleasant.

Olives are just one of the many trees whose smells have led to domestication. Tea is one of the earliest examples, under cultivation for at least 2,000 years for its smell, taste and gentle simulative effect. The domestication of tea is so far advanced that botanists know of no wild tea plants. Chocolate and coffee, likewise, are bound to us by their smell, taste and effects on our psyches, all results of plant chemicals.

Tree aromas connect us to the inner worlds of plants. This delicious encounter is reward enough. The particular aroma of each tree also contains stories. I encourage you to become a sylvan sommelier and find some of your own. 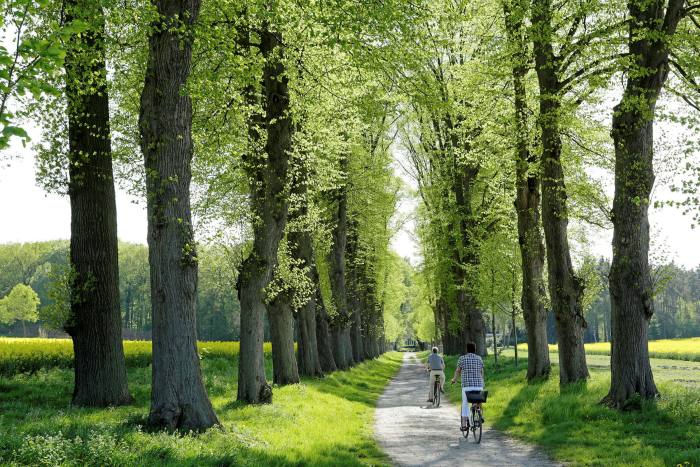 In London, the flowers of lime trees fill the streets with sweet summertime aroma, enticements to bees. Later, flowers gone, it is maple leaves that are especially good at tinging the air with late summer aroma. In autumn, we enjoy the rich, tannic smell of leaves underfoot. This is the smell of renewal of the soil, the annual leaf fall that rejuvenates the base of the food chain.

Tree aromas connect us to the inner worlds of plants. This delicious encounter is reward enough

The bright resinous smells of Christmas trees and solstice pomegranate and nuts will then fill homes. Our rituals honour the good things that come from trees.

One of the most striking autumnal tree smells in New York City comes from the squishy pulp around ginkgo seeds. The city has more than 20,000 of these pollution-tolerant trees that come originally from China. The aroma is like rancid butter, a vigorous slap to the nose.

In Hong Kong, Bauhinia “orchid” trees release a rose-like fragrance strong enough to perfume city blocks. Fig trees, of which the city has 24 species, adjust their fruits’ subtle aromas according to the time. During the day they release odours attractive to birds; at night they shift to bat-friendly smells.

Many tree smells are subtle, but with a little attention with our noses, we can detect them and connect to local ecological and seasonal rhythms. This is a connection that can continue indoors. Book aromas hint at the art of papermaking. Spice jars, tea and coffee remind us that we eat and imbibe trees every day. The tannic richness of Scotch whisky discloses the inner character of oak wood.

Smell is the most emotionally evocative of the senses. Tens of millions of sensory cells in our noses await the arrival of molecules from the world around us. In this time of face masks and social distancing, it is still safe to embrace a tree and inhale, following our noses into intimate and surprising experiences of connection.

David George Haskell is a professor of biology at Sewanee: The University of the South, in Tennessee. His book “Thirteen Ways to Smell a Tree: Getting to Know Trees Through the Language of Scent” is published on October 28 by Gaia (Hachette)

Source: The scent of trees: how to understand their language | Financial Times