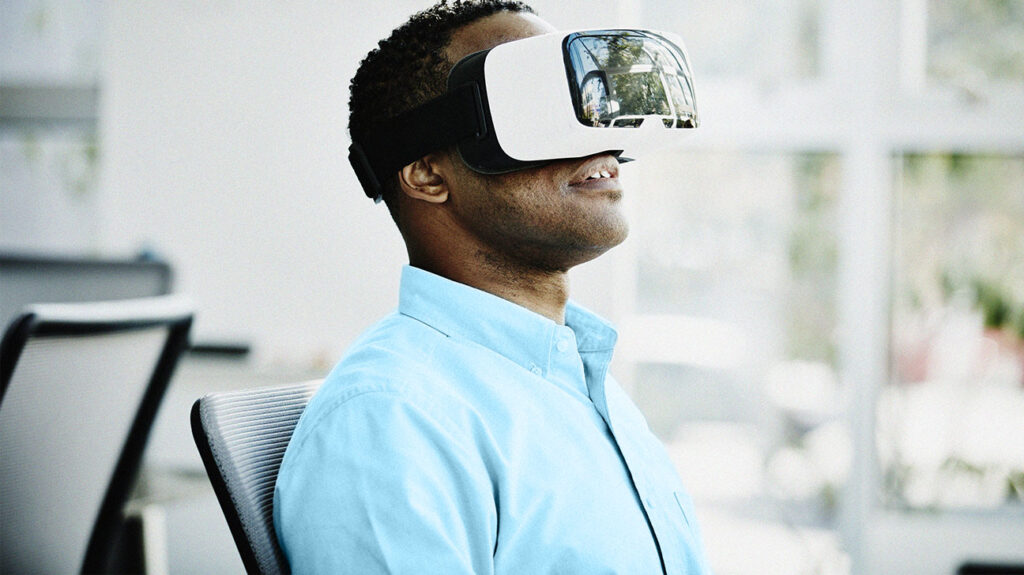 Doctors often prescribe opioids for the treatment of acute and chronic pain. However, opioids have a high potential for misuse, and long-term opioid use can lead to dependence.

Mindful breathing requires individuals to focus their attention on their own internal experience, specifically the sensation of inhaling and exhaling.

Mindful breathing can be particularly difficult for beginners, as it involves focusing on an internal sensation for longer periods. VR-guided breathing has the potential to address this challenge.

Studies show that engaging with the external stimulus in the form of the immersive, or realistic, sensory environment that a VR system presents can help reduce pain.

However, scientists do not fully understand the mechanism by which VR modulates brain activity to reduce pain perception.

Experts believe that the amount of attention directed at the painful experience modulates the perception of pain. Engaging with VR requires visual and auditory attention, and this distraction reduces the attention directed toward pain. This in turn lowers the perceived levels of pain.

Moreover, recent developments suggest that exposure to VR may reduce pain even when individuals are not actively engaging with it.

In other words, VR may help alleviate pain by a mechanism other than the distraction of attention.

A recent study that appears in the Journal of Medical Internet Research used brain imaging to investigate the mechanisms underlying the analgesic effects of VR.

The study reports that individuals using either of the techniques had a higher threshold for pain after practicing mindful breathing for 1 week.

“We found that both meditative breathing methods decreased pain sensitivity, but our study showed two distinct analgesic mechanisms in the brain, like yin and yang.”

“In the traditional mindful breathing practice,” he continued, “more frontal regions of the participants’ brains modulated pain sensitivity by prioritizing their attention on the internal sensations (interception).”

“In the VR breathing group, more sensory-related regions in the brains modulated pain sensitivity by prioritizing the processing of the external VR […] immersive experience (exteroception).”

The present study involved 40 healthy adults who practiced either traditional or VR-aided mindful breathing for 7 days.

In the VR breathing technique, the headset displayed a 3D image of virtual lungs that moved in synchrony with the participants’ breathing patterns. The participants wore headphones that played breathing sounds that were also synchronized with their own breaths.

Since the participants in the VR group did not have access to the VR headset at home, the researchers asked them to recreate the VR experience by imagining and visualizing their lungs as they practiced the breathing routine.

After the completion of the breathing activity in the lab on the 1st and 7th day, the researchers administered a test to measure the participants’ pain thresholds.

They recorded the brain activity of the participants during the breathing exercise and the pain threshold test. They tracked changes in brain activity levels using an imaging technique called functional near-infrared spectroscopy (fNIRS).

fNIRS uses low levels of harmless nonionizing light to continuously track blood flow changes in brain regions. This technique uses the principle that when a brain region is activated during a task, there is an increase in blood flow.

The researchers found that both traditional and VR-aided mindful breathing increased the participants’ pain thresholds after 1 week of practice.

They then looked at the differences in brain activation patterns between the traditional and VR mindful breathing groups during the pain test.

Both groups in the present study showed a reduction in the anterior prefrontal cortex activation after 7 days of mindful breathing practice.

The present study thus shows that VR breathing can modulate pain even aftercompletion of the VR breathing exercise. Also, an increase in pain threshold occurred alongside activation of specific brain regions.

These results show that VR can produce analgesic effects through an alternative mechanism, not just through the distraction of attention due to active engagement with VR.