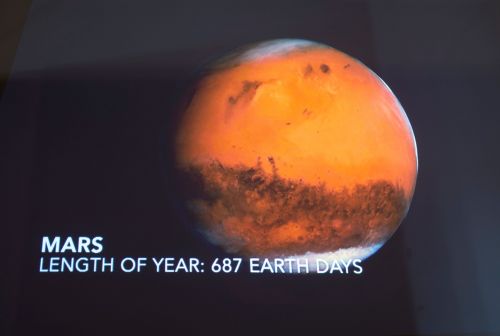 “The Other Four,” pushes the visitor past their visual limits and immediately engages the senses of touch, taste, sound and hearing | HPR1

The High Plains Reader spoke to Plains Art Museum Executive Director Andy Maus about “Symphony of the Cosmos,” the upcoming improvisational, live performance with artists Aida Shahghasemi and Nima Hafezieh. Andy discussed the facility’s “pride in doing something that is adventurous and unique” that to his knowledge, “hasn’t been done to this extent before.” Speaking of the interconnectedness of the performance and exhibition, he said that one could not exist without the other.

“The Other Four,” running through November, pushes the visitor past their visual limits and immediately engages the senses of touch, taste, sound and hearing. Walking into the gallery transports you to a refreshing cool, calmly sterile environment with a slight “doctor’s office” smell — minus the trepidation.

Andy led me through the black and white lab-like space, from interactive exhibit to exhibit, curated by John Schuerman. Participation is encouraged, and expected. Andy takes pride in the focus on accessibility, and offers “How can you be accessible without embracing all the senses?” Deaf artist Liza Sylvestre’s “Taste and Smell Survey” is immediately in front of us — two white platforms complete with paper, pens and slots to add to your own personal observations of the taste and smell elements provided. The wall nearby is littered with these notes, where the visitor can read the experiences of others. One of the offerings reads simply “Listerine Pancakes.”

Next up is Ken Steinbach’s auditory and visual coin drop, where quarter-sized coins intermittently fall from holes in the ceiling. Visitors are encouraged to take one, and ponder its meaning. The artist’s image is engraved on them, along with the enigmatic phrase “Everybody Knows Everything.” The falling coins are amplified by the concrete floor, and as the visitor moves on to other exhibits, the startling sound becomes a persistent reminder of their existence.

It is in this area of the gallery that the “Symphony of the Cosmos” performance will take place. Andy explained that this would be an intimate experience, with perhaps 30-40 people, if not more, based on a similar gallery performance given there. Further along, we move to the beautiful planet projections on the large, white wall, in front of a comfortable seating space (gray cushions that vibrate) with amps in the corners treating us to the ethereal sounds of the vibrational frequencies of Mars, Mercury, Jupiter, Earth and more. Andy commented that one of the planets was “disturbingly loud.” [Ed.Note to Andy — I think it was Mercury.]

The sounds, recorded by NASA, will accompany artists Aida (vocals) and Nima (piano), who will perform over the top of the planetary sounds, using improvisation. At the conclusion of the performance, the artists will engage in a conversation with the audience.

There are many more fascinating exhibits to connect with in the gallery, mostly by regional artists. Each one is a reminder of the growing interdisciplinary nature of the artists that Andy speaks so highly of. He is excited at the prospect of going “beyond the artwork” with the local community, through outreach, performances, publications, and programs. He tells me, “Our work is not about us — it’s really about audience.”

“Symphony of the Cosmos”

FREE and Open to the Public

Source: ​A Symphony for The Other Four