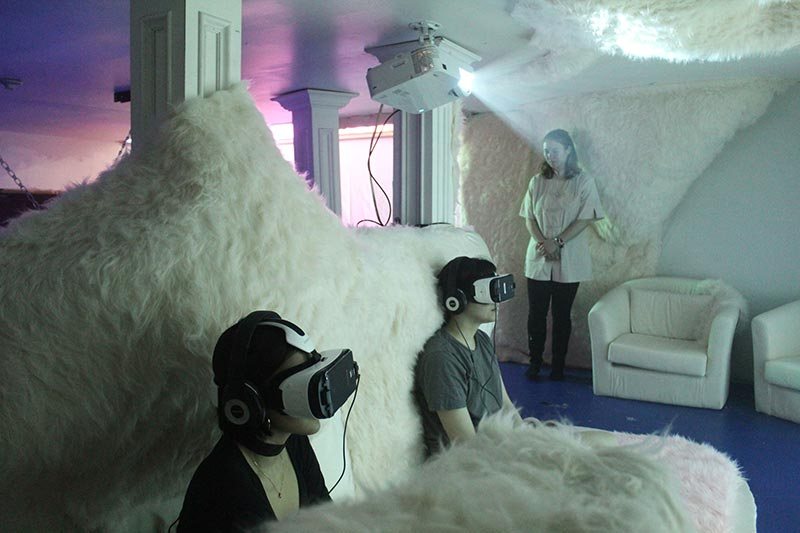 No cell phones. Those 3 simple words can throw some of us into a tailspin of “digital anxiety”, or a term Tyler Pridgen, the spa’s Co-creator, used in a video segment with VICE. For guests of Luxury Escapism’s The Oddly Satisfying Spa, disconnecting from the clutches of a cell phone is the first step towards full body relaxation and mental bliss. Using sensory tools, technology, and massage, this Brooklyn-based pop-up tech spa is one of the first to use VR as a treatment.

Oddly satisfying is a term that means exactly what it says — that whatever you’re looking at is in some way oddly satisfying to the senses and the mind. This can be gifs or YouTube videos of something like people squishing kinetic sand with their hands or using a tool to slice into it.

It’s also a sensation of emotional release that gets attributed to machines performing visually or auditorily calming or gratifying tasks. The tasks are repetitive or precise in nature like this video of a hydraulic press crushing things.

The trending #oddlysatisfying can also be given to ASMR, or the autonomous sensory meridian response. ASMR is what gives us that scalp or full body tingle we get from putting on headphones and listening to videos with whispers or satisfying crinkle sounds that are picked up by binaural microphones.

The Oddly Satisfying Spa is a pop-up “digital wellness experience” that places guests in a tranquil but curious world of meditative and thoughtful art and technology. It also serves as a way to dial down hurried minds for a mental reset. Detoxing from the web, text messages, emails, and mental demands for a few hours is one part of the spa. Many heavy tech users choose to visit the spa in order to rebalance their connection with the ever-present and sometimes toxic relationship with cell phones, computers, and social media by disconnecting.

The spa’s aesthetically and sensorily pleasing art, architecture, and virtual experiences are designed by the spa’s Co-creators Lyndsey Wheeler and Tyler Pridgen and is backed by technical designer Brendan Bercik. The creations of other talented media artists from OTHERWORLD,  Motherlode Lab, and VR pro, David Lobser, as well as many others, have been seen throughout. Walls with projected splashes of calming textures and colors are displayed, there are fuzzy carpets, and even houseplants that are hooked up with mics to create music.

Like a traditional spa, there are massages, whispers, plant life, and peace-inducing music. The unconventional “mind over matter” aspect focuses on “placebo” elixirs that guests can sip on to ease anxiety, boredom, numbness, dissatisfaction, and other states of being. VICE reporter Beckett Mufson shared his experience, saying: “Midway through my time there, I was lying belly-down on a massage table and realized I had never felt so relaxed at an art show before.”

Watch the VICE video below:

To follow the traditional with more non-traditional features are sensory activities, art installations and VR encounters designed to promote relaxation and peace of mind. Guests let loose and become entranced with ASMR activities where they snip, scrape, roll, slice, squish, stack, and spin objects and play with kinetic sand and other sensory tools to feel a real sense of physical and emotional gratification and release. Pairing VR and ASMR sensory activities together, like watching a trippy VR experience while soaking hands in a bowl of squishy beads or stepping into the VR Steam Room, is so satisfying to think about it to make us want to melt and we’re not even there!

Where to Find The Oddly Satisfying Spa

If letting go of traditional technology in favor of art, sensory experiences, and VR sounds like a getaway you’d want to experience you can find The Oddly Satisfying Spa on their website and on Instagram and Facebook.