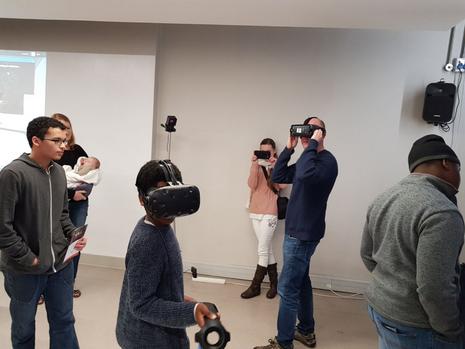 Students will have the opportunity to immerse themselves in the world of virtual and augmented reality with the aim of creating a more interactive learning environment at university.

UWC is the first university in South Africa to offer an accredited one-year postgraduate diploma in e-skills with immersive technologies stream, which incorporates augmented reality and virtual reality.

The university launched the programme at its open day event on Saturday – where students were able to ask questions about the technology and interact with experts.

The objective of facilitating an immersive technology-based knowledge transfer for education, edutainment and industry partnerships is to create, share and collaborate virtual 3D learning platforms across a broad range of disciplines.

The programme is a collaboration with UWC’s department of computer science in information systems and EON Reality. It responds, in part, to Minister of Higher Education Naledi Pandor’s call during her budget speech for tertiary institutions to produce graduates who are ready for the fourth industrial revolution.

Head of the computer science programme, Professor Antoine Bagula, said the programme was important for South Africa because it offered enhanced learning that was not possible without the AR/VR technologies.

“Some studies around the world have revealed that learning in an immersive environment leads to improved success rates compared to traditional ways of learning,” he said.

Bagula said a recent study in South Africa on the fourth industrial revolution found that all sectors of industry were planning to use AR/VR to increase their productivity. These include retail, mining, construction, engineering, IT software and services, health, education, logistics, finance, real estate, manufacturing and training simulations.

Senior lecturer in information systems, Dr Mmaki Jantjies said: “Students will be able to learn to develop the technology for immersive platforms like head-mounted gears and mobile phones.”

Dr Mmaki Jantjies @MmakiJ explains how the Postgrad Diploma in e-skills with Immersive Tech will impact many sectors such as retail, health and engineering. @EONRealityInc pic.twitter.com/7MsXQousCJ

The use of AR and VR as teaching tools has already been widely adopted by some universities in the US and the UK.