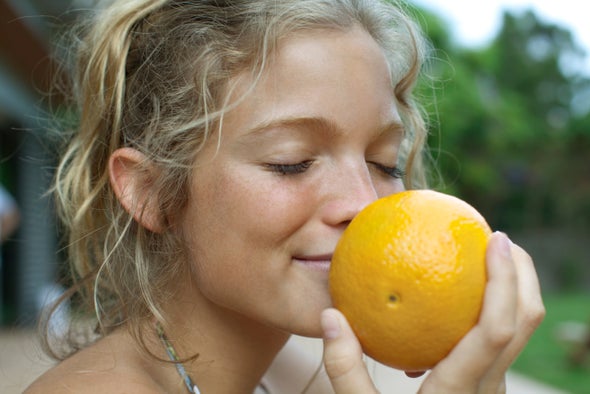 How do humans and other animals distinguish between the smell of rotting seafood or the enticing allure of a ripe banana? New research at New York University Langone Health and their colleagues uses artificially created odors to help reveal the intricate chain of events that allow one odor to be distinguished from another. The results were published today in Science.

In the deep recesses of the nose are millions of sensory neurons that, along with our eyes and ears, help conjure the world around us. When stimulated by a chemical with a smell, or an odorant, they send nerve impulses to thousands  of clusters of neurons in the glomeruli, which make up the olfactory bulb, the brain’s smell center. Different patterns of glomerular activation are known to generate the sensation of specific odors. Firing one set of glomeruli elicits the perception of pineapples; firing another evokes pickles.

Unlike other sensations, such as sight and hearing, scientists do not know which qualities of a particular smell are used by the brain to perceive it. When you see a person’s face, you may remember the eyes, which helps you recognize that individual in the future. But the ears and nose might be less important in how the brain represents that person. The authors of the new study sought to identify distinguishing features involved in forming the representation of odors in the brain.

To do so, they used a technique called optogenetics to activate glomeruli in mice. Optogenetics uses light to stimulate specific neurons in the brain. And it can help determine the function of particular brain regions.

By activating certain patterns of activity in glomeruli, the researchers generated “synthetic smells” that the mice perceived as real. They first trained the rodents to recognize the switching on of six specific glomeruli, causing them to perceive an odor that was unknown to the researchers. The mice received a water reward when they recognized the correct smell and received water from a spout. When other glomeruli were activated—generating a different odor—there was no reward.

The study authors then altered the timing and mix of activated glomeruli and observed how doing so affected the mice’s behavior. This step allowed them to determine how important each glomerulus was to accurately recognizing the smell. A given glomerulus, in effect, acts as its own mini sensory organ within the olfactory bulb.

They found that the sequence of glomerular activation was crucial to odor perception. When they changed which glomerulus was activated first, the mice demonstrated a 30 percent drop in the ability to sense the correct odor. When they changed the last one activated, there was only a 5 percent reduction in detection ability.

“We created an artificial activation pattern, or artificial smell, and trained the mice to recognize it,” explains the paper’s senior author Dmitry Rinberg, a neuroscientist at N.Y.U.Langone. “Then we modified that pattern to see which cues were most important to forming a perception of it. The thing is, we have no idea what the mice are actually smelling—if it’s an apple or an orange, if it stinks, if it’s pleasant!”

Rinberg likens smell perception to the melody of a song: The notes—in this case, representing activated glomeruli—are important. But without the right timing, the song, or the perceptual experience, falls apart. Changing the seventh note of a melody might be unnoticeable. Swapping the first two might result in a new tune altogether. When we smell, it is not only about which glomeruli are activated but also what time sequence they follow.

Harvard University biology professor Venkatesh N. Murthy, who specializes in the neuroscience of olfaction and was not involved in the study, points out that there is a large body of evidence relating patterns of glomerular activation to smell perception. The uncertainty has been whether higher brain regions “read” these activation patterns to identify a smell, as well as how important the order of activation is. “Rinberg and colleagues show that timing matters,” he says, “and, further, that the earliest activated neurons are more important for identification of the odor than those neurons that are activated later. In the song analogy, it’s as if the first few notes are key to identifying the piece (think Beethoven’s Fifth!).”

Rinberg hopes to carry his research more deeply into the brain to see how other regions of the organ aid in perceiving odors and objects once they receive information from the olfactory bulb. “We’re one small step closer to the movie The Matrix,” he jokes. The film features a world ceded to intelligent computers that relegate humans to a shared simulated reality created in their brains—similar to the way the researchers devised an artificial odor. “In a sense, we re-created the movie with smell,” Rinberg adds.

Source: The Brain Interprets Smell like the Notes of a Song – Scientific American