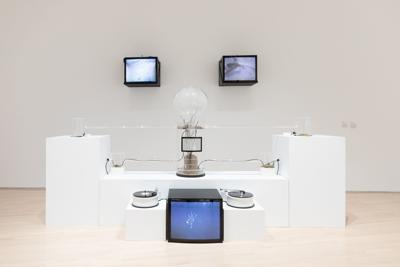 Tangible smells remind us of home | The Morning Sun

By msensory team06/03/2019No Comments
When you walk up the stairs of the Broad Museum in East Lansing, the student bustle of East Grand River Avenue is left behind. As a recent graduate of Brigham Young University with an emphasis in art and humanities of Europe, I was interested in seeing the art museum at MSU designed by the late architect Zaha Hadid. Prompted by a family friend who is a design professor at CMU, I took the short trip for a day in East Lansing.

In Hadid’s building erected in 2012, you feel as though you’ve entered a new land, a futuristic place that looks like a piece of Kryptonite has landed on the expansive campus. The exhibit I visited, “Matter(s) Matter(s): Bridging Research in the Arts and Sciences,” is a catalyst to understanding the exponentially increasing connection between the human body and the natural and scientific world. My thoughts were drawn to consumerism and its avoidance as humans seek insight from their own environments, including their own malleable bodies. It’s like Turner Prize-winning artist Damien Hirst’s vatrine’s cross-bred with rubber meets the road conservation, and it made me reanalyze the body and its relationship to the many homes we belong to.

Initially I noticed the large projection video ahead of me, which had a surgery going on. The Cyprus-born performance artist, Stelarc (b. 1946), created Extra Ear: Ear on Arm, an ongoing project since 1997. The video documents Stelarc’s second surgery on the extra ear attached to his arm, effectively becoming an “internet organ” for his body. To Stelarc, this third ear is a “symptom of excess”, and is just one of his many robotic experimentations creating other-worldly anatomical creations.

On the opposite wall of Stelarc’s piece was a piece by Berlin-based artist, Sissel Tolaas (b. 1963). Tolaas has a background in chemistry, mathematics, linguistics, and art. She specializes in scents, creating a lab archiving thousands of smells in air tight jars. Here at the Broad, her piece titled SmellScape Detroit 18/2018, is her preservation of the many scents of Detroit. Lying on many individual shelves are geometric blocks infused with scents that you can pick up with your hand and internalize for yourself. Similar to “listed sites” that are historic and preserved as a result, Tolaas’s scent figures preserve the evolving landscape of historic Detroit.

Smell, more connected to memory than any other sense, has a portal effect in this exhibit. With each smell block I picked up, I felt transported to Southwest Detroit and its nuanced areas. Some of the scent labels were “Detroit, the city that continues to call the world’s bluff,” and “Detroit is not a city attempting to be another city, it’s just Detroit.” My favorite smell label was “We didn’t change our zip code when our schools started smelling like gunsmoke and new money.”

Tolaas’s work had my senses traveling back to my college town Provo, Utah, and the smell of the canyon in the morning. It had me back in Mt. Pleasant, Michigan, where I spent my high school year’s, smelling warm pizza Friday night pizza in frigid January. I thought of the many places we call home, and what we choose to preserve as we leave our human footprint on this earth. What brings us to a conscientiousness of the places we effect and interact with? How do we increase our capacity to be present in our environments?

If you want to have an adventure of the senses, go to “Matter(s) Matter(s): Bridging Research in the Arts and Sciences,” on display at Michigan State University’s Broad Museum until March 3.