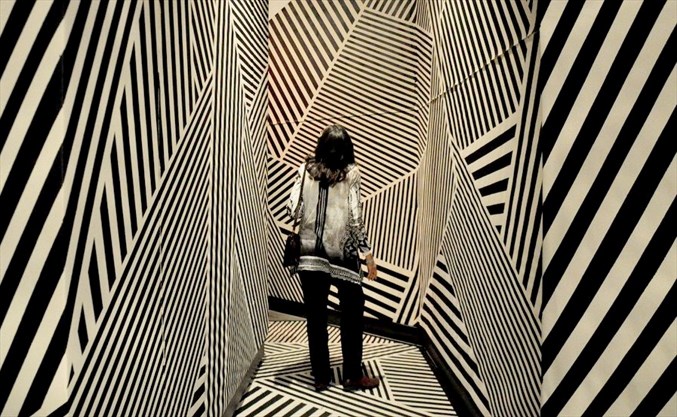 Separated into seven rooms in the Queen’s Square gallery, the daily life of the 15-year-old deafblind student at W. Ross Macdonald School for the Blind in Brantford is articulated in a multi-sensory experience that transcends the usual visual and audio art instalments, entitled Transformed Through Touch.

Started with funding from the Ontario Arts Council Artists in Communities and Schools Projects Grant, gallery education officer Robert Thody approached the school’s vice-principal Lynne Osasuyi about what kind of project could be done with the deafblind and how to execute it.

During their “continued discourse,” Thody rounded up artists Gareth Lichty, Gary Kirkham and Meghan Sims, who observed seven students at the school, including Racey, as they went through their day.

“When we came back to them with the ideas, they were like, well there’s the show,” McClure said.

“She was able to create more of the hearing part of it, as well as putting with the visual and tactile part because of the fact that she’s had more hearing loss in the last year, so it’s new and fresh.”

Racey, on hand at the gallery on Tuesday to see the installation with her classmates, admitted she really didn’t have an overall vision of the project in the beginning, but the artists were able to use her ideas.

”I just thought about experiences and how different people experience different things, especially in the deafblind community,” she said.

The seven rooms convey different visual and audio stimulus, as well as emotions, the students, with Racey as their conduit, face each day. There’s the classroom chaos room, the white noise room, the advocacy room, the social settings room, cafeteria chaos room, loneliness room and the piano room.

Each one allows “gentle touching” by the public to allow people to see, hear and feel what the students experience day-to-day. There are also original pieces of music created by Racey that play through the art project.

In fact, Thody called Racey the actual artist for the installation, with Lichty, Kirkham and Sims working for her. He likened it to Michelangelo’s painting in the Sistine Chapel, how she, like Michelangelo, was the visionary behind the art, but had other people to execute some of that plan.

“It became not just Transformed Through Touch but transformed through trust,” Thody said.

“What happened was the artists said, ‘in any way we can support you this is your project.’

“It took each of the artists out of their regular visual and auditory world view into the world of the students. That was really part of the critical aim of this project, to enter into their world and really experience what art means from their perspective.”

Thody added the Transformed Through Touch title really rang true when the installation reached it’s full potential, from having the students touch scaled down reproductions of the rooms to recognize the symbolism in them, to building rooms that challenged or warmed the senses.

“Really, we were the ones that learned from them and grew in our greater understanding of the strength of character and wealth that each of those students brought to the project … we were totally overwhelming with the beauty that arose from the original concept.”

That transformation is something Racey hopes will hit the public, too.

“I think I want the public to understand, first of all, that louder isn’t always better,” Racey said.

“Second of all, that every person has different hearing levels and vision levels, and all those types of things, and something that works for one person might not work for another. I think it’s cool that they get to experience all the sounds.

“There’s also the atmosphere of joy in the one room. I think that’s good so they know that it’s not all bad to have hearing loss and vision loss.”