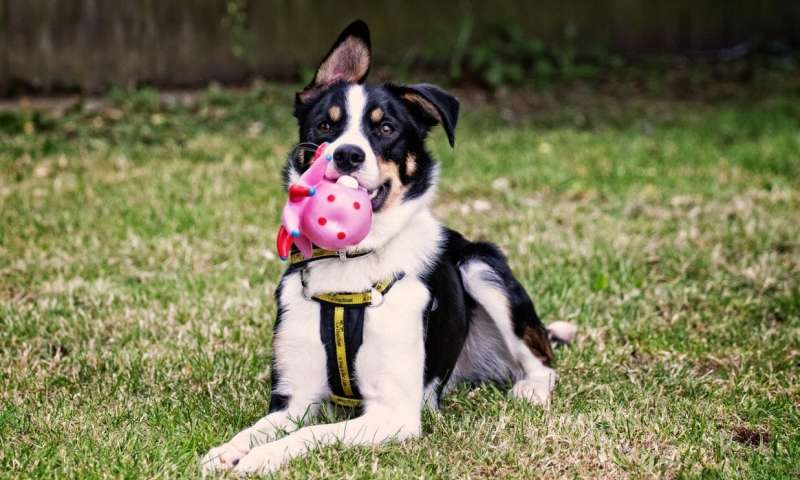 Study shows how dogs can benefit from scented toys | Phys.org

The welfare of dogs in kennels and rehoming centres may be improved if they’re able to play with scented toys, according to new research by a team that included Hartpury University’s Ben Brilot.

PThe researchers found that dogs were more likely to play with rabbit or lavender-scented toys than unscented toys.

Dogs also displayed more positive behaviour around scented toys, such as exploring their kennel and any other objects within it, while periods of rest and sleep were also more likely to occur.

These behaviours are generally associated with better welfare and there is a possibility that displaying these behaviours may increase the chances of adoption from a rehoming centre.

Being held in a rehoming centre awaiting adoption can be a stressful experience for dogs given the confined spaces, reduced time for human contact and loud barking from other dogs.

One way to reduce stress can be to provide toys, but in studies of kennelled dogs very few animals actually play with them.

The team, including researchers from the University of Plymouth, Dogs Trust and Nottingham Trent University, wanted to find out whether rehoming centres could encourage play behaviour by adding scents to the toys, making them more stimulating to explore and play with.

The study used 44 kennelled dogs, all aged at least one year old that were being looked after at a Dogs Trust rehoming centre.

Scents (lavender or rabbit) were added to toys and the dogs’ behaviour when given these scented toys was compared to their behaviour around toys that were unscented.

The team found that toys that were scented were more likely to be played with, but other behaviours also changed, with dogs exploring their kennel more and resting more at other times.

These behaviours are known to be associated with dogs that have better welfare.

Though the team didn’t measure adoption success, it’s also known that people prefer to adopt dogs that are playful and quiet, both behaviours that increased with scented toys in this study.

The team found one final curious thing: the dogs that played with toys more weren’t necessarily the ones that showed an increase in other behaviours.

This suggests that the presence of the scent might be beneficial in itself, not just because it encourages toy use.

Ben, Associate Head of Animal at Hartpury University, said: “Our initial results look very promising, suggesting that adding scent to toys in rehoming kennels might, at least in the short-term, improve welfare outcomes.

“The use of novel scents may therefore promote better welfare in kennels, but differing scents and longer-term observations, including rehoming success, need to be looked at.”

Dogs Trust’s Research Manager Naomi Harvey said: “We are always looking for ways to improve the day-to-day experience for the thousands of dogs we care for across our 21 rehoming centres in the UK and Ireland.

“Scent is an incredibly important sense for dogs and while sniffing is a natural behaviour for them, it’s often overlooked as a form of enrichment.

“These results show that adding scent to toys could be a practical way of improving welfare for our dogs and we are pleased to support this research.”

The expertise and experience of lecturers at Hartpury spans all areas of animal and agricultural sciences, and all staff are actively involved in research and knowledge exchange, either as researchers or practitioners.

Research is fully integrated within teaching, with staff research active in the areas in which they teach and many dissertations embedded in larger scale research projects.

All research activity either directly or indirectly informs not only current industry practice but also the curriculum.

Source: Study shows how dogs can benefit from scented toys

Breathing air is a liberating experience. It freed our ancestors from the constraints of staying wet or having to remain within easy reach of water for refuge, respiration or reproduction. But the biggest change it made in our lives was to expose us to a whole new range of sensory experience.