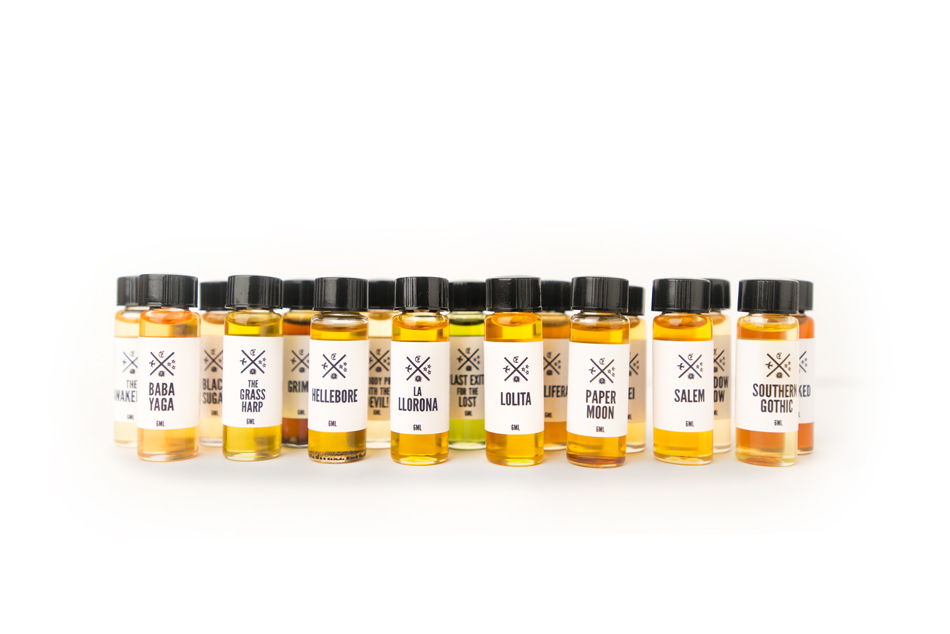 Striking the balance between artistic vision and wearability: The Olfactory Occult of Sixteen92

Named after the year of the Salem witch trials and with fragrance monikers such as Wicked and I Saw Goody Proctor with the Devil, Sixteen92 clearly has a penchant for the supernatural spectacle. Founded by former opera singer, advertising creative director and fine art photographer Claire Baxter in 2014, the indie company won this year’s Art & Olfaction Award for Bruise Violet, a Babes in Toyland inspired scent with notes of red lipstick, iris and dusting powder.

The two newest collections are based on classic horror films (such as The Exorcist, Halloween and Poltergeist) and Bram Stoker’s Dracula respectively. Curious noses can expect to find intriguing compositions including sweet ozone, chrysanthemum and cracked porcelain (The House is Clean); jasmine tea, plum and black violets (Mina Harker); and black amber, opium and blood musk (Vlad Dracul).

But it’s not just the spooky side of things that this versatile, Fort-Worth based brand draws inspiration from, with other fragrance ranges influenced by the likes of 90s girl rock and Greek mythology figures. Other fascinating olfactory creations juxtapose the sweetness of kettle corn and spun sugar with the metallic undertones of machine oil and rusty metal (Shadow Show), or the moody notes of ocean air and damp moss with the juvenile saccharinity of saltwater taffy (The Awakening).

In the following interview, Baxter discusses her obsession with the Wiccan world, striking the balance between artistic vision and wearability, and the yearlong struggle of capturing the smell of winter in the desert.

First off, what is your most poignant olfactive memory?

It’s not a single memory, but more of a collection of memories of fall throughout my childhood. Here in Texas we’re lucky to get about four weeks of real autumnal weather, so I have a little anthology of fond memories of raked leaves, pumpkin patches, new flannel sheets, marigold flowers, late harvests and the first wood fire of the season. That one morning each year when I walk outside and get the first flash of all of these scents together is something I look forward to every year, and it instantly takes me back to childhood.

Where does your fascination with history, lore and magic stem from?

About as soon as I could open books by myself I picked out compilations of ghost stories, urban legends and all of those stories that have been passed down for generations to get kids to behave. My grandmother had a collection of illustrated encyclopaedias, and the pages about vampires, ghosts and witches were read so much that I probably had them memorized for a time. I still have those books actually. When I was in the fourth grade I discovered the Salem witch trials. I did a big report on the history of witchcraft persecution, which caused a bit of an uproar with a couple of my teachers, I guess because it was considered ‘inappropriate’ for a ten year-old to be discussing ancient witch-hunting and torture practices.  But, you know, I just thought it was all super interesting and didn’t think anyone would misinterpret my enthusiasm. The whole situation was a formative experience for me, and a lesson that sometimes people in power can be wrong — a bit of an allegory to the trials themselves, now that I think about it …

How did your background in branding and photography help you develop your vision?

It was actually a pretty seamless evolution for me. To be frank, after years in the advertising industry I found myself exhausted by working on other people’s brands and decided to shift my focus towards something tangible of my own, under my own control and vision. I’ve always been an artist. I was always happiest working for myself on my own projects with only myself to answer to, and all of the challenges and thrills that brings. I have a love of business and brand management, and been fortunate to have seen firsthand — and learned from — the stories behind the successes and failures of brands I’ve worked with.

The most beautiful things in the world cannot be seen or even touched, they must be felt with the heart.