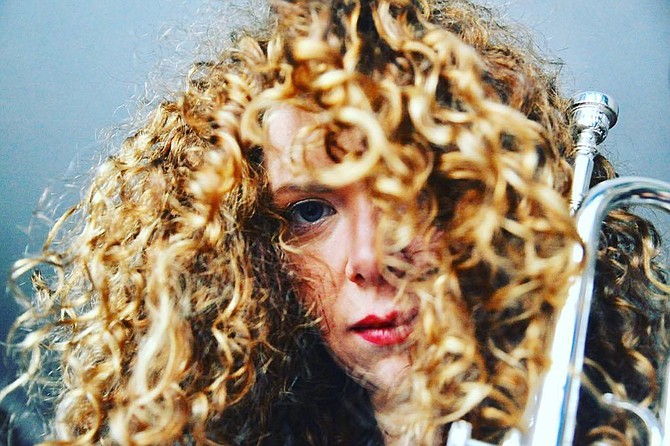 By msensory team13/01/2021No Comments
UCSD trumpet professor Steph Richards explores the connection between smell and music in her album Supersense.

“Iwas at an Alex Cline concert when the air-conditioning suddenly came on and immediately the whole vibe changed. That got me to thinking about how the other senses might influence the way we perceive a live concert. It might enhance our emotional connection to the performance,” says UCSD trumpet professor Steph Richards regarding her new album Supersense, which features a “scratch-and-sniff” card of custom-tailored scents meant to accompany the performance and present the listener with a different stream of information.

“If I have musicians in the studio and scent was one of the controlling structures, how might we respond and how might that influence the music? I started composing, and I shared the structure and the texture with the scent and multi-media artist Sean Raspet. Then he would try to find a scent that might act as a counterpoint to what’s happening musically, or perhaps enhance the feeling behind the music. My only rule when working with Sean was to make scents that were totally abstract. Not something that you could define or articulate, because I was afraid of distracting the musicians if it were something familiar. I wanted him to develop scents that were more like a color or a texture.”

So how did this manifest itself in practical terms?

“I brought the musicians into the studio,” Richards said. “Each one had a bunch of numbered boxes. And while they were reading the score at certain points it would indicate to open box number 2, for instance, and they would have to respond. It was different on everyone’s chart, so we were all smelling different things at different times.”

And how should the listener experience this?

“Well, that’s the way it went down in the studio. People at home can listen to the music and then scratch the scent card that comes with the CD or LP so they can smell the same things we were smelling when we were recording. Ideally, I’m hoping that it will enhance the feeling for the listener as well.”

Do you have a theory as to what connects scent with music?

“I know that those two senses are really closely interwoven in the brain in early human evolution. The auditory and the olfactory. I think the biggest thing I learned from this project is that a scent stands still. Physically speaking, it probably has a seven second bloom, and there is a complexity, it might start out one way then progress in another and finish with a different vibe. It makes for some really interesting conversations. One thing I encourage is for listeners to not try and describe and define the smells — just listen to the music and let the smells wash over you.”

What has been the initial response?

“Pretty good,” says Richards. “There has been a lot of curiosity. So there’s been a ton of people buying the record just to see what it smells like. What’s really interesting about this project coming out during the Covid-19 pandemic is that my whole hope was to bring people closer to the music. And so in a time when we can’t be together in concert halls to feel that closeness and intimacy, maybe this will mitigate that.

“But yeah, the reception… I was worried that a lot of critics would say ‘it stinks’. But so far the reviews have been very positive. I think people are really interested and excited, because it’s so different from what I usually do. Everyone plays outside of their comfort zone.”