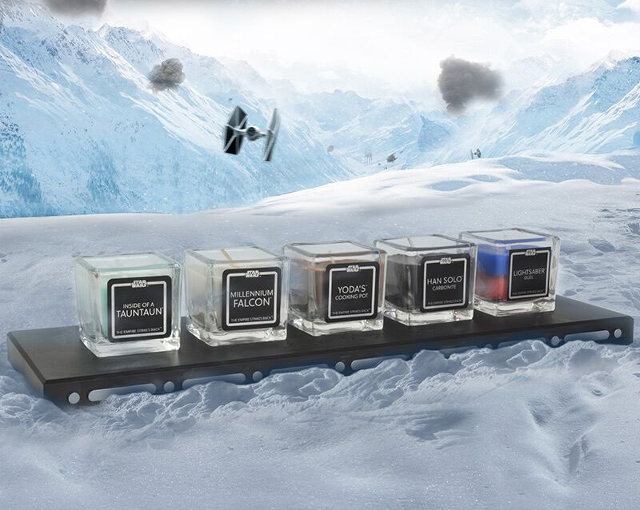 Create your own version of “Smell-O-Vision” by watching one the first three Star Wars films and lighting these officially-licensed candles from Merchoid when the scene coincides with the smell.

Wookiee: Ever wondered what a walking carpet smells like?
Bantha Milk [erroneously spelled ‘Banther’ on the candle]: Love the smell of bantha milk in the morning?
Trash Compactor: Find out what was very nearly the last smell Luke, Leia and Han ever experienced
X-wing Cockpit: Perfect for playthroughs of Battlefront’s aerial combat
Cantina: Eau de scum and villainy
Lightsaber Duel: Do you prefer the smell of the dark side or the light side?

The Empire Strikes Back:

Han Solo Carbonite: This smell is all Leia had to remember Han for a long time
Millenium Falcon: She may not look much, but she’s got it where it counts (the smell)
Inside of a Tauntaun: Thought it smelt bad on the outside? You’ve experienced nothing yet!
Yoda’s Cooking Pot: Yoda’s legendary Force powers are only eclipsed by his cooking skills. Smell it for yourself!

Return Of The Jedi:

Rancor: The only way to smell a Rancor without ending up its lunch
Sarlaac Pit: Add a new dimension to your favourite ROTJ scene
Jabba’s Palace: Admit it, you’ve always wondered what Jabba smells like
Ewok: Do they smell as cute as they look? Let’s find out!
Death Star Destroyed: The sweet smell of rebellion